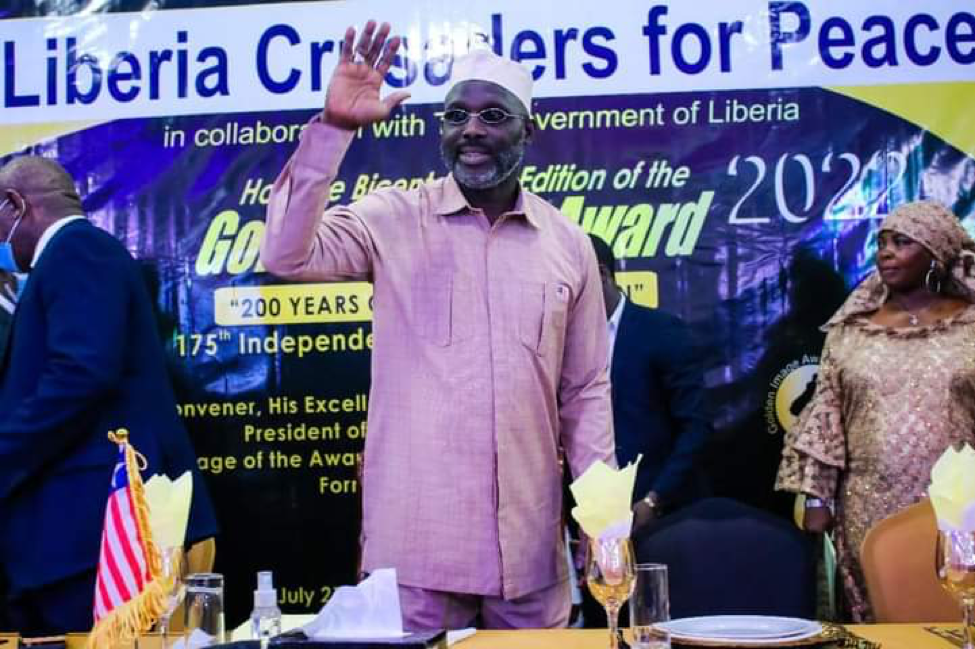 The Global Leadership Peace Award is a special edition of the Hollywood African Prestigious Award (HAPA Award) that is believed to be awarded to a leader for their distinct leadership skills to transform their nation by positively impacting their people.

The HAPAwards are given to American and African community leaders, international political figures, dignitaries, celebrities, and stars who have made significant contributions to the fields of motion pictures, arts, music, and comedy.

As an organization bound to celebrate the outstanding achievements of artists in various entertainment genres, the vision is to continue blending cultures, promoting the beauty and richness of Africa and America while spreading peace throughout the world.

“Your story has inspired me and the world. You are the reason for people to love Liberia; we want to help tell your story even though the world knows your story,” she said

President Weah appreciated the founder and executive director for bestowing upon him the HAPAAWARDS, stating that the award serves as a bicorn of hope for At-Risk-Youth and all people in Liberia.

The Liberian leader pledged to use the award to continue working for the betterment of the nation.

President Weah also appreciated the continuous support of the American government to Liberia. It is asserted that Liberia’s history is incomplete without the mention of the role and historical ties that bind the two countries.

He also called on all Liberians to remain peaceful as they gear towards the grand celebrations of the 175th Anniversary of Independence.

Meanwhile, the 2022 Golden Image Award, which was held on Thursday, July 21, 2022, at the Monrovia City Hall, was awarded to committed private, public, or civil servants, leaders, political actors, humanitarians, educators, investors, developers, advocates, activists, and peace actors, who have contributed immensely to public service delivery in Liberia and the world at-large with impeccable character.

The distinguished Golden Image award, which has been awarded to prominent Liberians, was first awarded to current president George Manneh Weah as the first recipient of the prestigious award for his role in peace in Liberia.

The Award has also been awarded to prominent Africans, John Jerry Roland of Ghana, Nelson Mandela of South Africa, as well as former US Ambassador to Liberia, Linda Thomas Greenfield, who have all contributed to peace and sustainability in Liberia and across Africa.

At the same time, the Liberian leader lauded the many contributions of the recipients of the Golden Image Award (GIA) that have had an extraordinary impact on Liberia and the world at-large, admonishing them that the award should serve as a stimulating catalyst to enable them to continue their good work.

President Weah concluded by giving appreciation to the organizer of the award, Madam Julie Endee, for her tireless efforts that made the award ceremony a success, admonishing her not to be distracted by what others may say about her, but rather to focus on doing the right thing for Liberia.

At the same time, the Deputy Chief of Mission at the US Embassy near Monrovia, Mr. Joel Marbury, who served as keynote speaker, described the long-lasting relationship between the US and Liberia as a strong tie that cannot be taken for granted. On behalf of the US government, he wished Liberia a happy independence and reaffirmed the US government’s unwavering support for Liberia.