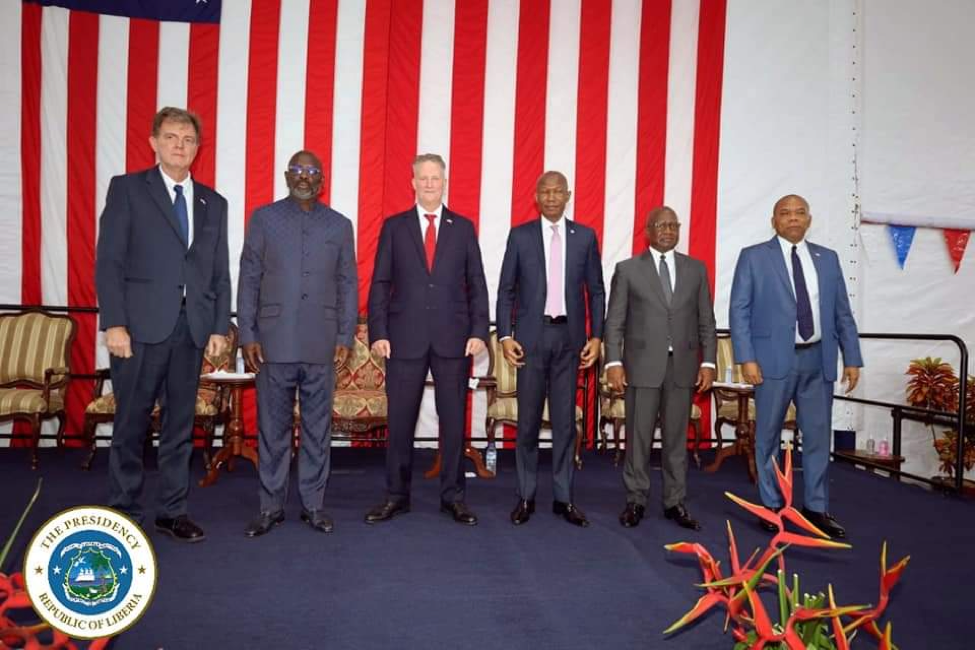 The U.S. Ambassador to Liberia, Michael McCarthy, spoke at the occasion and noted that the two countries’ relationship has a long history and is frequently family.

True to his words, Ms. Glady Gorwor, a blind adolescent from Liberia, performed a wonderful rendition of the National Anthem as though she were an American. At ceremonies like this one at the Embassy, Ambassador McCarthy said that this song would be played all over the world.

He stressed the fact that Francis Scott Key, a founding member of the association that encouraged Americans to travel to Liberia, wrote the words of their national anthem in 1814, establishing even another concrete link between the two countries.

Ambassador McCarthy stated that the links that unite Liberia and America go beyond friendship, noting that they are often family, taking into account the numerous previous presidents to present businessmen and women yearning to return to invest in their ancestor’s land.

The American diplomat claims he was criticized for the fact that J.J. Roberts was also an American citizen, which he totally agrees with.

“I’ve spoken a bit about America’s founding fathers, which is appropriate on this day, but I also wanted to take a moment to acknowledge several of Liberia’s forefathers”.

“From many of Liberia’s historical presidents, to current day businessmen and women wanting to return to invest in the ancestor’s land, the ties that bind us go beyond friendship – they are often family,” the he noted.

He feels welcome like a family member, according to him. “And that is exactly how I feel in Liberia and how I’ve been welcomed here by Liberians – like family”.

“I am proud this afternoon to stand with a fellow republic, a democracy that like us, is required to listen to the people in a never-ending effort to become a more perfect union.  Both countries lived through terrible civil wars, and I believe, came out the other end as more equal societies,” Amb. McCarty said.

The Ambassador lauded Liberia for its support to human rights and democracy. Because of those years of chaos, Liberians understand the importance of peace and the value of human rights more than most people.  I suspect THAT awareness is what inspired Liberia’s vote at the United Nations calling out the unprovoked and barbaric war instigated by Russia against the Ukraine, and fuels Liberia’s courageous statements in defense of oppressed people currently imprisoned in concentration camps.  It is an honor for us to stand with Liberia on a day like today when we highlight the ideals from which our countries were created”.

One may recall that in June of this year, Liberia, which is the only country in Africa to have diplomatic relations with China, was one of the countries that sponsored a joint statement that condemned the People’s Republic of China for its violations of human rights.

The US ambassador is confident that the two of the oldest, continuous Republics on Earth, both Liberia and the United States will thrive.  “We have faced difficulties before, and this informs us that we will be able to do so in the future.  Indeed, I want to note the promise and the potential of a self-reliant Liberia”.

He said 246 years ago, few nations or people on earth expected much from the former 13 colonies of England, noting that many residents of the colonies themselves did not want to see a declaration of independence. “Yet, the idea that a government receives its authority from the governed, and that the power of the state comes from the power of the people – this is what took root, including in Liberia 175 years ago”.

“So, on this momentous occasion, I would like to borrow a quote from Liberia’s third president, Daniel Warner – a great Liberian AND a great American – and say:

“All hail, Liberia, hail!
This glorious land of liberty”

The American diplomat offered a toss to the health of President Weah and to the citizens of both countries, and stated, “To our glorious lands of liberty”!

In response, President Weah stated that it was an honor to participate in the celebration of the 246th anniversary of the independence of the United States of America alongside Ambassador McCarthy and his team. He sent his warmest regards and best wishes to President Joseph Biden and the citizens of the United States of America. Both nations share a deep commitment to the values of democracy, the rule of law, and human rights, which have bound them together politically, geographically, and throughout their shared history. The leader of Liberia expressed his satisfaction with the long-standing relationships that exist between his nation and that of the United States of America. He took advantage of the opportunity to demonstrate that he still cares about the decades-long ties that existed between the two nations. The President of Liberia has remarked that he is looking forward to strengthening their alliance and working more closely together in a variety of different areas.

And now, “Excellencies, distinguished ladies and gentlemen, I invite you to raise your glasses and drink with me to the good health, long life, and happiness of President Joseph R. Biden Jr., to the prosperity and wellbeing of the American people, and to the bonds of friendship and cooperation that so happily exist between the Republic of Liberia and the United States of America,” President Weah said.

“She is messed Up”