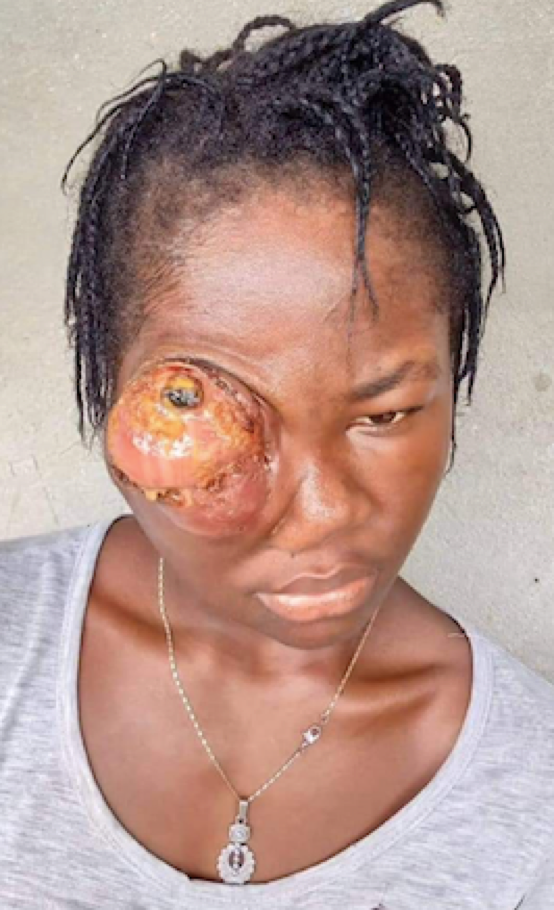 Fatumata Boakai, a 16-year-old resident of Jartono Town in Browerville who has been complaining of excruciating agony for the past three months, claimed that if she did not receive financial aid for medical care, she might pass away. Her eye is slowly slipping from its socket.

Following the publication of her account, the Liberian Minister of Health, Dr. Williminia Jallah, contacted the family to request that they bring young Fatumata to the John F. Kennedy Medical Center for potential treatment. The family claims that the health minister ordered them to take her to the JFK eye clinic.

Eugenic Nice, Jr., the founder and CEO of Liberian Girls Rock and a resident of the United States of America, also indicated interest in assisting in the rescue of young Fatumata. The family claims that Eugenic and the Liberian Health Minister both contacted them and expressed a desire to assist.

In early interview with the Womenvoices newspaper Fatumata said that she was admitted to the John F. Kennedy medical facility in June but was later released without surgery or other treatment because her mother was unable to pay the bill.

She claimed that when she woke up, she could feel her eye scratching, but she ignored it because she thought she had an infection in her eye.

She had been having constant pain and itching for a number of days before being taken to Redemption Hospital, where she was told that she had had a typical eye infection and was only in need of an eye drop to treat it. She received a negative answer despite this, which is one of the reasons she decided to visit JFK for additional medical care.

According to her, doctors at the John F. Kennedy medical center advised her that the eye issue was brought on by cancer and needed to be treated right away in order to be resolved before it progressed to the other eye.

She continued by saying that the doctor had informed her that although the operation couldn’t be performed domestically, the hospital may arrange for her to be flown abroad for a more complex surgical procedure on her eye.

Little Fatumata Boakai also lamented the fact that, despite the fact that her condition is getting worse by the day, her parents do not have the money to pay for the required medical care.

She continued by saying that because of the state she was in, she and her parents had to leave the rental house where they had been residing.

Little Fatumata claimed that the landlord had asked them to vacate their home right away because of her illness. They are quite worried that it might hurt their kids.

She is pleading with the government, humanitarian organizations, and good-hearted Liberians to help her get medical care outside of the nation.