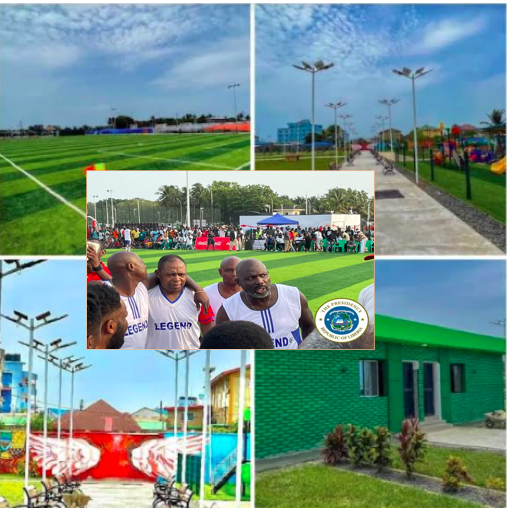 Liberia’s capital, Monrovia, has been declared by a government enthusiast a UNESCO World Heritage Site. Between the James Spriggs Airfield and the main Boulevard in Sinkor, there was formerly a dusty and filthy stretch of ground that is now a contemporary leisure complex.

President George Manneh Weah’s determination and vision to put Liberia on the international development map is reflected in the redevelopment of the piece of land into an iconic recreational centre for Liberian youth.

After months of arduous effort, President Weah dedicated the Invincible Sports Park on Friday, April 15, 2022, declaring the day and moment an opportunity to concretely unveil his aims and objectives for the Liberian people’s pleasure and well-being.

In addition to the sports park, President Weah stated that since taking office in 2018, his administration has made considerable progress in terms of development, noting that many major projects have now been completed or are nearing completion.

The President reassured Liberians that the administration is committed to finishing all projects currently in the works.

Speaking to throngs of spectators, including international guests, at the dedication of the Park, the Chief Executive said: “Today we are here to open a sports park that no one expected.  Again this is an opportunity for me as President to continue to show the love that I have for Liberia and the Liberian people. I am a patriot by nature, and will always remain patriotic.”

President Weah reflected on fond memories of his youthful days playing soccer on the now spot, then known as IE Practice Ground.

“As I look across the street, I can see the Ellen Mills Scarborough Junior High School, where I obtained my Junior High School certificate.  This was our soccer field.  I can also see the Bench Old Timers Field on the other side of the airfield…right over there.”

“I broke my first record in the high school league right here on this field by defeating the famous Wells Hairston High School when I played for the Muslim Congress High School,” President Weah continued.

He also recalled his days practicing on the ground as a player of Invincible Eleven, one of the leading soccer clubs in Liberia at the time.

“So you can see that I know this area very well. I used to live here, right across the Airfield.  Although this piece of land was undeveloped, it was used for recreational purposes for many decades by the general public in Monrovia,” President Weah further recounted.

He went on: “Since this is one of the first places in Monrovia where I used to practice soccer in my youthful days, it can be given the credit for producing the first and only Liberian and the first and only African to have won the FIFA World’s Best Footballer title, and the European Ballon d’Ór.”

The Liberian President also recounted the meaningful role the site played in Liberia’s history, when hundreds of white-outfit wearing Liberian women prayed for peace to return to our land, adding, “They were here as Prayer Warriors for our Nation, in the heat and in the rain, laying on the ground and sitting in the sand, with no shelter from the elements.”

The women, traversing for peace of Liberia using the site, the Liberian leader indicated that God heard their prayers and their efforts were rewarded with lasting and sustainable peace of nearly two decades now.

Why built the Park

Reflecting on what informed his decision to transform the site into a Park, President Weah reminisced driving by the area daily going to and coming from work, and wondering why the place remained in the same state after many years since my youth, with no efforts on the part of past governments to improve it, to provide people the simple open-air pleasures of recreation and relaxation.

“And so I decided that I would do something about it.  I feel a strong sense of obligation to this community because of what this place has contributed to my success in the world of soccer.  The transformation of this space into a modern sports and recreational facility for the public is not only pleasing to me, but is a realization  of my childhood dream to back to my people and my country.”

The President noted that developing the Park is his way  of keeping the promises made to the Liberian people that he would  improve their urban and civic spaces.

The President thanked those who immensely contributed to the project, including  the National Port Authority, the Liberia Maritime Authority, and the National Social Security and Welfare Corporation.

He particularly hailed Minister of State Without Portfolio, Mr. Trokon Kpui, for being the force behind the successful completion of the project.

“From the very outset, this initiative has been given priority under my Presidential Delivery Unit, headed by the hard-working Minister of State without Portfolio, Hon. Trokon Kpui. Today, I am pleased to unveil yet another project, consistent with our Pro-Poor Agenda: The Invincible Sports Park,” President Weah said.

President Weah had words of appreciation also for Madam Nora Finda Bundoo, Chief of Protocol at the Executive Mansion for her exceptional contributions in the realization of his dream.

The President admonished Liberians to ensure that the park is kept clean, warning also that  no alcohol or drugs will be sold or allowed at the park because “children will be in the park as well.”

He disclosed that the  Park wil be closedly monitored as there are security cameras installed to enable authority to enforce the ban, and that there will be constant surveillance to ensure that this Sports Park is drug-and- alcohol-free.

According to him, the park needs to be a place of harmony, a place of training, friendship and fitness..

At the same time, President Weah has disclosed that the development of the Park also renewed interest in looking into the inadequacies and shortcomings of the James Spriggs Payne Airports towards its rehabilitation and enhancement.

“I have therefore directed the LCAA and the Management of the airport to draw up plans and to develop a feasibility study for the upgrading of this facility, including the extension of the runway in the direction of the swamp, in order to enable international jet traffic to operate from Spriggs, and the construction of a new access road for both passengers and cargo.”

Consistent with his desire to uplift Liberians, to give them decent living standard, President Weah also transformed the dilapidated homes within the vicinity of the Park

He said: “When we arrived here to begin the construction works for the Park, we were saddened and concerned to see the plight of the residents living around its periphery, many of them in makeshift shacks and dilapidated houses.”

President Weah added that he could not rehabilitate and develop a brand new park while neighboring residents, particularly their living abodes were in squalor

“Therefore, the Government of Liberia was instructed, through its relevant agencies, to relocate the residents into temporary shelters, while their existing homes were demolished to make way for new housing units.”

“Today, I am pleased to inform you that a comprehensive housing project, consisting of 50 new 2-bedroom housing units, is being built around the perimeter of this Sports Park.  Thirty of these houses have now been completed, and the remaining 20 units should be completed within the next 60 days.”

President Weah used the occasion to urge the youths of Liberia to emulate his footsteps as one who came to the limelight of prosperity due to good deportment.

He said: “Today, I am  the 24th President of Africa’s First Independent Republic because of characteristics which have been embedded in me from sports.”

He named the characteristics as  Perseverance, Respect, Discipline, and Teamwork, noting “these are core values from sports that must be drilled into our young people for them to succeed in whatever they choose to do in life.”

As a legendary sports icon, President Weah said he holds very dearly the concept of sport as a national development tool.

Naming Components of the Park

The President named the different facilities at the Park after several eminent Liberian personalities who contributed to sports development in the country..

Construction of the Invincible Sports Park began in 2021.