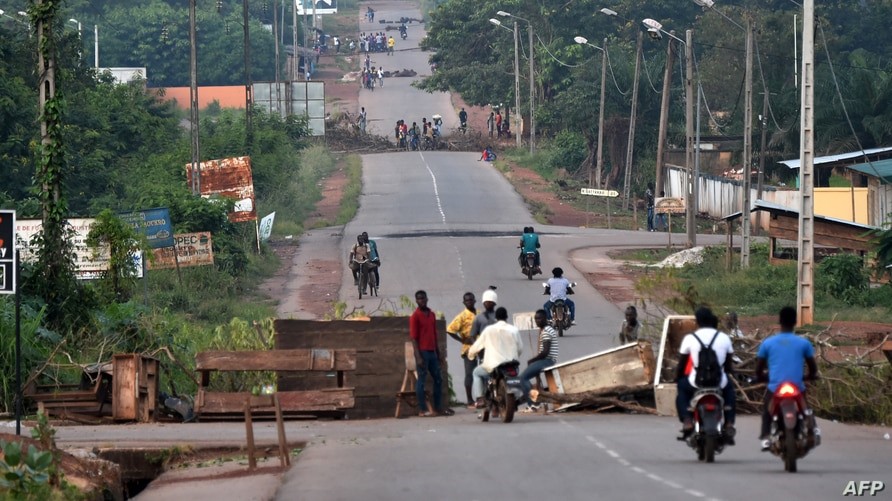 The U.N. refugee agency says more than 3,200 Ivorians have fled post-election violence in their country to Liberia, Ghana and Togo and more reportedly are on their way.

Violent clashes erupted in Ivory Coast after Saturday’s presidential elections, reportedly killing at least 12 people and injuring many more. That has prompted thousands of people to flee to neighboring countries.

The U.N. refugee agency says most of the new arrivals are women and children from Ivory Coast’s west and southwest regions. Among them, it says are former Ivorian refugees who had recently returned to their home country. Now, they have been forced to flee again.

UNHCR spokesman Boris Cheshirkov describes the situation as very worrying. He told VOA expectations are high that more people will leave Ivory Coast based on the acceleration of new arrivals Monday.

“In a 24-hour period, we registered 1,000 refugees coming into Liberia. That is for a total of 2,600, some of those people having come into the country in the days preceding the election. So, what we are doing is we are working closely with the government of Liberia but also Ghana and Togo on contingency plans should the situation worsen and should more people start to come across the border,” he said.

President Alassane Ouattara won a hotly contested third term, receiving 94 percent of the vote according to the electoral commission.  The opposition disputes the victory, calling Ouattara’s bid for a third term illegal. The president and his supporters argue a constitutional change in 2016 nullified the president’s first term, allowing him to run again.

Ivory Coast President Alassane Ouattara speaks to journalists after voting at a polling station during presidential elections in Abidjan, Oct. 31, 2020.

Cheshirkov said the election has triggered violence not seen in Ivory Coast since 2011, raising fears the current situation could spark another conflict.

“We know that people are looking back to 2010-11, that period when there was violence, which at that time led to 3,000 dead, more than 300,000 refugees fleeing in the region, and around one million displaced,” he said.

The UNHCR is urging Ivorian political and opinion leaders to show restraint and to work together to calm the situation. It is calling on them to refrain from inciting violence and resorting to hate speech and to resolve disputes peacefully and through dialogue.

“Government stealing from the mouths of children”

The Senate’s decision to reject Ms. Edwina Collins was based on...