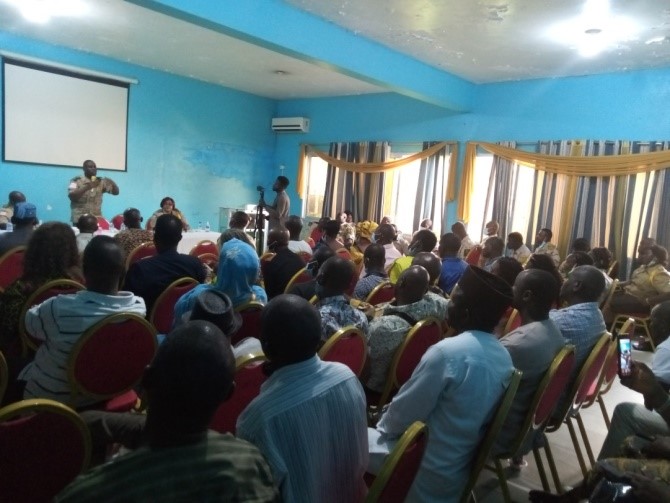 The Commissioner General of the Liberia Immigration Service (LIS), Robert Budy Sr., has called on aliens who are residing in Liberia to go through the legal means in acquiring their Liberian documents.

Speaking at a one day ‘Alien Awareness Forum’ which was organized by the LIS to provide a consciousness of the rules and regulations that govern an alien in Liberia on Thursday, October 29, 2020, Commissioner General Budy said, aliens should operate under the law of Liberia by getting into the country through the official border points in order to get the right documents that would qualify them to become legitimate aliens in Liberia.

The LIS boss said, an alien is not to illegally enter any country and acquire the country’s documents through unauthorized persons or medium.

According to him, said actions automatically pose a security threat to the country, something he said, would lead authorities of the country to suspicion as it relates to the person’s true identity.

“Instead of seeking illegal means of living in Liberia as an alien, follow the rules and regulations that require an alien to obtain a valid alien’s documents from the LIS and its partners in order to guarantee your stay as an alien in this country”, Commissioner General Budy cautioned aliens in Liberia.

Commissioner George Budy however disclosed that the bulk of the aliens’ illegal entry and stay problems in Liberia are from member states (ECOWAS), and at such, he calls on them to patiently follow the documentation process, no matter how hard it might appear to be, so as to help the Government of Liberia in carrying out its function of protecting all and properties.

The forum which was held at the Young Women Christian Association’s (YWCA) conference hall in Congo Town brought together members of the Economic Community of West African State (ECOWAS) and non-members.

Also speaking at the forum, the Deputy Commissioner General for Naturalization at the LIS, Atty. Asatu Bah-Kenneth disclosed that LIS plans to digitalize its database system. She said, this will make the data collections and tracing system of immigrants to function faster.

Deputy Commissioner Bah-Kenneth also called on all aliens who are in Liberia not to follow the wrong path of being an accredited alien in the country.

She stressed the need to adhere to GOL’s regulations. With that, she said, the aliens should ‘help the government to also help them’.

In remarks, the aliens thanked the Commissioner General of the LIS for organizing such gathering aimed at clearing their doubts of the much confusion.

They added that they have been wishing for such awareness occasion, saying it would have helped them by saving them of the many stress and embarrassments they have experienced as aliens in Liberia.

They, however, expressed joy of how they have been living in peace since they came to Liberia, an ECOWAS member state. They pledged to uphold the rule of law of Liberia and appealed for more meetings of such to be held by the LIS.

“Liberia has a unique history that must be told”

“Women should lead the global response against poverty”- Sirleaf