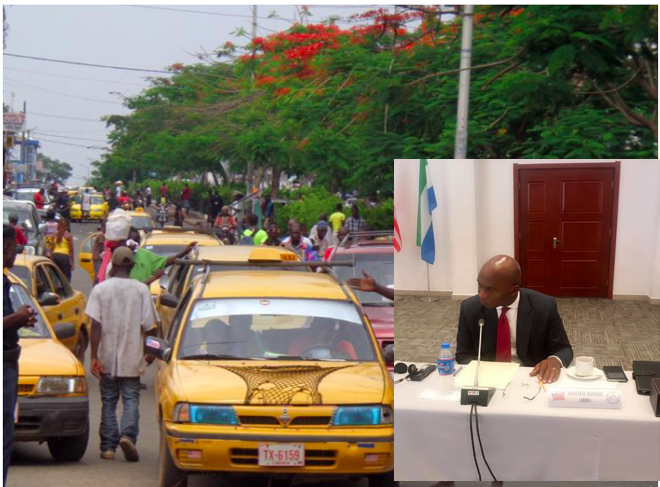 The Ministry of Transport appears to be in an irreversible coma as the transport sector of the country apparently falls apart. Since the government’s pronouncement of an increase in petroleum products in Liberia, ordinary Liberians and residents have been compelled to prohibitively bear arbitrary charges for transport fare: writes Dearest K. Sammie.

An investigation by Womenvoices has established that commercial drivers and passengers are in constant scuffles since the government announced an increase in the prices of petroleum products in the Liberian market.

Womenvoices’ reporter, Dearest Sammie, observes that the Ministry of Transport appears to be in an irreversible coma as the transport sector of the country apparently falls apart. Since the government’s pronouncement of an increase in petroleum products in Liberia, Ms. Sammie said, ordinary Liberians and residents are compelled to prohibitively bear arbitrary charges for transport fare.

The government of Liberia announced recently what many described as an unhealthily high hike in the country’s petroleum prices. A gallon of gasoline cost LD $875, up from LD $635 a week ago, according to a Ministry of Commerce announcement, while a gallon of diesel cost LD $930.

The rise in petroleum product prices has eventually created a knock-on effect on all other commodities in the Liberian market. According to one observer, in practice, this entails additional hardship and suffering for the people, particularly market women. According to a 2021 UN Women rapid assessment report, about 85% of Liberian women are food insecure.

“Upon setting the price, it was immediately expected that the Ministry of Transport would announce new transport fares to avoid the present shameful situation in the sector”, reporter said.

Up to press time there is no indication that Ministry of Transport is contemplating on releasing new transport fares anytime soon, as all cell phone calls placed to Minister Samuel Wlue perpetually failed.

“It is unbelievable,” one observer remarked, “that the government did not standardize the transportation charge with this significant increase in the prices of petroleum products.” She said, “Commuters will undoubtedly be at the mercy of commercial drivers. I can see a lot of squabbles between passengers and drivers about transportation fares, especially with school going children”.

However, some members of the opposition have slammed the government for shifting the burden to consumers.

“It is callous profiteering to raise the prices of petroleum products that were already in stock long before the Russia-Ukraine crisis was ignited,” said Robert Kpadeh, a steward of the former ruling Unity Party (UP). As far as we know from credible sources, “in the petroleum industry, no new petrochemical shipment has come to the country since the Russian invasion of Ukraine.”

Robert, however, acknowledged the reality that petroleum prices will spiral upward as a consequence of the ongoing Russian invasion of Ukraine. According to him, the point must be made that the sudden rise of petroleum products in Liberia on day four of the crisis is nothing more than a fraud concealed under the veneer of the Russian invasion of Ukraine.

The critics said importers of petroleum are robbing the citizens at the approbation of the government: “How can we be this barbaric to one another?” And the disgusting, disgraceful, and disconcerting part of this broad daylight robbery is that the government summons the brazen audacity to give its consent to crooked and greedy petroleum importers to rob its citizenry amid blistering economic hardship already battering the Liberian masses”.

The government of Liberia has justified that the prices of gasoline and diesel fuel have increased globally as a result of the ongoing military conflict between Russia and Ukraine, which has affected supply chains.

The Information Ministry said that in view of the global increase in petroleum product prices, the Ministry of Commerce and the LPRC would continue to work with importers to develop a mutually acceptable price structure for petroleum products.

The government also announced that the Ministry of Commerce inspectorate team will be closely monitoring the approved ceiling prices to avoid any unreasonable hike in the pump prices of gasoline and fuel oil in the local market. The Ministry of Commerce and Industry will also be closely monitoring the effectiveness of the price circular to ensure that importers do not undercut fellow competitors in the market.

Other governments struggle to strike an economic balance by keeping real wages constant, among others. Economists call it “maintaining macroeconomic stability.” Because it’s just the right thing to do! “, Boakai said in a Facebook post.

He said the Liberian government is more interested in collecting tax revenue and making it seem like a shortfall is a curse when it isn’t. “They seem not to care that an increase in the pump price of petroleum is equivalent to several other increases, triggering rising inflation and slowing economic recovery,” Boakai said.

A government that prides itself on being “pro-poor” should be suspending petroleum levies and absorbing the shocks. That would have been a pro-poor intervention. Sierra Leone and Rwanda did the same (find the press release from the Rwandan government below). This isn’t rocket science; they plainly don’t want to increase transportation fares and alter the cost of goods and services,” noting that, “You can fail on everything as a government, but don’t contribute to significant price increases at the expense of securing tax dollars. Wrong, wrong, wrong!!!! “