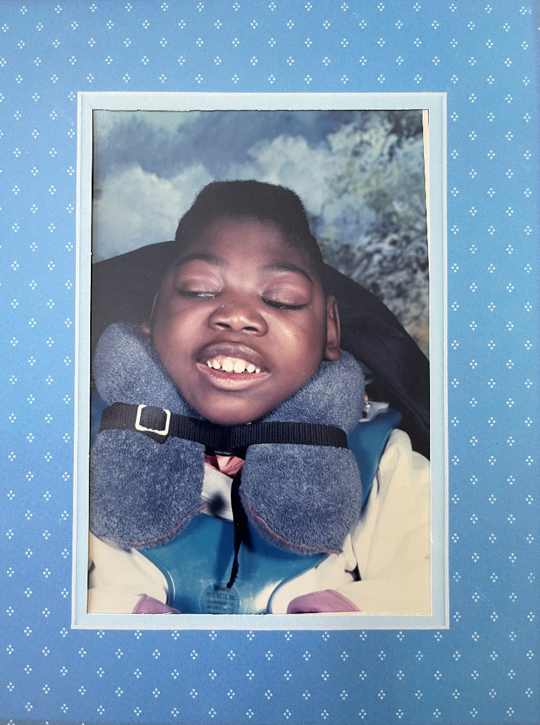 On April 12, 1980 a Coup D’Etat occurred in Monrovia, Liberia during which the President of Liberia, William R. Tolbert Jr. was brutally assassinated.  A few days later, on April 22, 1980, 13 officials of the Tolbert Administration, including Joseph J. F. Chesson, Attorney General of Liberia at the time, were summarily executed after a mock trial. The daughter of Attorney General Chesson, Yvette Chesson, who was pregnant at the time, experienced indescribable grief and trauma following the senseless murder of her beloved father and other innocent citizens that would continue to have lingering effects for decades to come.

On February 9, 1981, after having passed the due date for delivery, Yvette underwent a c-section procedure and delivered a son, in Raleigh, North Carolina. USA. He was named TROHOE Sayee Kparghai, Jr. by his parents: Trohoe S. Kparghai, Sr. and Yvette Nmuna Chesson. Immediately after birth, Yvette noticed that Trohoe started having seizures. Doctors were called and he was assigned a neonatologist who would follow TROHOE until he was 10 years old- a record considering that a neonatologist usually treats newborn babies until they are 1 year-old and then transition to a pediatrician. It appears that not only had the trauma of the coup d’etat reverberated in Yvette’s womb, but both mother and child had received less than the standard of care required for a healthy delivery.  Consequently, Trohoe’s entire life would be ravaged with seizures and a multitude of medical diagnoses including cerebral palsy, quadriplegia, chronic respiratory disease, seizure disorder, severe asthma and cortical blindness, to name a few. Eventually, evidence surfaced that there was medical malpractice at the time of his birth. Just before he turned 18 years old, TROHOE sued the hospital and won.

Despite these challenges, TROHOE was deeply loved from birth. He was Yvette’s youngest child and as a result of the Coup, Yvette had to resettle her family in the United States. The family is expansive and had to expand to accommodate other family members as they migrated to the USA. His core family was: his maternal grand aunt Frances, oldest sister and protector Johnetta, Aunties Cora and Verlyn, big sisters Cyvette and LaVerne, and his buddy and big brother LeRoy. Aunty Pschopelia and Uncle Rouchell were to be with him initially and then left to follow their careers and family only to return in his life full force and with his Aunty Grace, to be with him until his death.

Some of the other family members who came into his life from time to time were his Cousin Pat and her children; Cousins Miamah, Amelia, Nikky, Yanida, and Yuna. At various times, his mother has opened up their home to provide temporary shelter for other family members, her friends and, sometimes, their children.

His mother was determined that Trohoe would have a “normal” life as much as possible. He was enrolled in the public school system in programs designed for individual with special needs.  He went to school daily as much as he could when one of his medical conditions did not have him in the hospital. At 7 years old, TROHOE went into a coma for 7 days. When in crises, he would telepathically communicate with his mother and had told her that he was going for “consultation” and nothing should be done to him outside of his normal routine until he returned. Yvette stayed with him in the hospital 24/7 to make sure that the doctors did not disturb him by testing, etc. On the 7th day, he opened his eyes, looked around and smiled…COMA WAS FINISHED! And so it went, many challenges were met including one of the largest when at 8 years old he had to have his throat cut and inserted a trach, at the same time his stomach was cut and a gastronomic tube was inserted to feed him as the muscles in his throat were collapsing and he could no longer swallow food. Again he went for “consultation “ and came back determined to live. After the trach and the g-tude were placed in his body, Trohoe  had to migrate to professional nursing care.

With the trach and g-tube, he got an angel called Lois Bullard, his nurse, who opened her Assurance Home-care Agency based on TROHOE and provided TROHOE excellent nursing care for over 30 years until his death. Trohoe’s memorable nurses included Lois, Alex, Hannah, Jimmy, Isatu, Elaine, Belta, and Olivia,…TROHOE continued to go to school and in 2002, he earned a High School Certificate from Longview School in Maryland, USA, a school with a special needs program under the Montgomery County public school system.

As much as possible, TROHOE lived a “normal” life. He traveled by plane, train, and car to various places in the United States. He went to State fairs and rode rides with his siblings holding him. He participated in all family gatherings. He finished high school. Spiritually, whether in crises in the hospital or celebrating birthdays or other occasions, Rev. Dr. Genevieve Garnett has always provided guidance with her daughter Vera close  by her side. He was baptized in the St. Augustine’s Episcopal Chapel in Raleigh, North Carolina.

TROHOE had many challenges and went through a lot of pain, but he was able to endure it all with the overwhelming love that surrounded him. He was a teacher in how to treat people with different abilities. He taught compassion, tolerance, advocacy and dependency on God. TROHOE was blessed with many mothers: Yvette , his aunt Pschopelia and his sister Johnetta. It was due to TROHOE that Yvette advocated for the full implementation of the American Disability Act in schools for the disabled children in Maryland USA that upon graduation a suitable after school placement must be found for them so that children are not “warehoused” or isolated at home but have activities that enlighten their lives and keep them meaningfully occupied. It was also Yvette’s advocacy on Trohoe’s behalf that forced Montgomery County, Maryland, USA to start implementing the American Disability Act Section 504 which requires schools to provide qualifying disabled children with free disabilities health-related services, including services provided for by a nurse during the school day, if necessary, to allow the child to receive their individualized educational plan. As a result, children in Maryland who qualify can now have a free personal nurse paid for by the school during the school hours. Yvette was the first person in the State of Maryland to have successfully advocated for this on Trohoe’s behalf and succeeded by having the program instituted by the school system.

On 19, October 2022, TROHOE had  a fever and had to be hospitalized at Washington Adventist Hospital in Silver Spring, Maryland, USA, where he was later diagnosed with a blood infection. He remained hospitalized until his death on 18 November 2022.

“I have fought the good fight. I have finished the race. I have kept the faith.” 2 Timothy 4:7. MAY HIS SOUL REST IN PEACE.