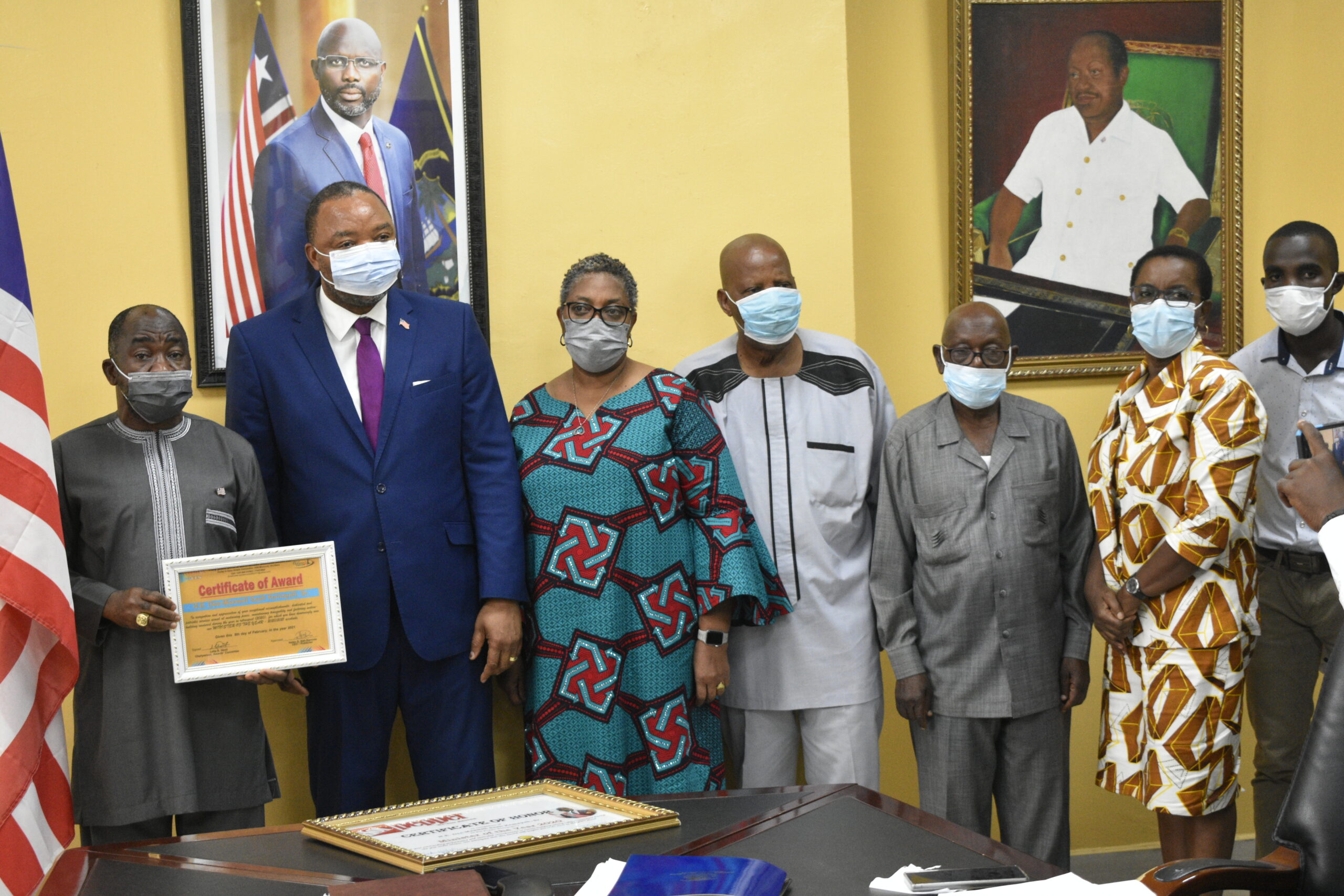 -Praise him for Transforming Liberia’s Image

During the ceremony held in the minister’s conference room at the Ministry of Foreign Affairs in Monrovia Monday, February, 8, 2021, representatives of the Women Voices and Hot Pepper newspapers presented two separate certificates of honor to Minister Kemayah on Behalf of their respective  institutions’  as “Minister of the Year 2020.”

Flanked by his deputy ministers, assistant ministers and other top Foreign Ministry officials during the program, Minister Kemayah was hailed by the two media entities for leading a robust transformation efforts along with his team which according to them, has revived Liberia’s image locally and internationally.

Having received the two certificates of honor, Minister Kemayah dedicated the awards to the President of the Republic of Liberia, H.E. George Manneh Weah and his government for his farsightedness and direction which have led to the transformation being recognized by the two media entities.

Minister Kemayah then renewed his profound gratitude to President Weah through whose wisdom and authority he has the opportunity to serve as Minister of Foreign Affairs.

“Had it not been him, we wouldn’t be here as we are all cognizant of the reality of his constitutional mandate as President of our Republic to nominate, and following confirmation to appoint his cabinet; and so we owe him, my family and myself, a debt of gratitude for our preferment,” Minister Kemayah said.

The Foreign Minister assured that he and his team remain relentless in ensuring that the reform at the Ministry of Foreign Affairs under his leadership is realized and actualized to the fullest, pursuant to the vision and agenda of President Weah and the ruling Coalition for Democratic Change (CDC).

Additionally, Minister Kemayah indicated that the gesture on the part of the two media institutions will go a long way in strengthening not only his resolve, but that of the entire leadership and staff of the Ministry of Foreign Affairs, and other ministries and agencies which inspire excellence or quality performance.

In reflecting on his time of service as Foreign Minister that commenced in the last quarter of 2020 and being honored as Minister of the year 2020, Minister Kemayah said the gesture by the two media entities is a surprise.

Notwithstanding, Minister Kemayah said the voice of reasoning has resonated with him that “it is not about how long that you serve, but how well you served.”

He noted that it has dawned on him that these two reputable media institutions in Liberia made the judgment respectively to honor him as Minister of the Year 2020, extending utmost gratitude to Hot Pepper and Women Voices newspapers for his preferment.

Earlier in remarks, Deputy Foreign Minister for Foreign Affairs Mr. Henry B. Fahnbulleh thanked the two media institutions for the honors, saying it is gratifying that they could identify Minister Kemayah for such a prestigious award.

He encouraged Minister Kemayah to continue to lead his team in the right manner, while also assuring him of their full support in making sure that his vision and the vision of Liberia will stand.

Mr. Washington Watson, representing Women Voices newspaper, explained that in a short period of time, Minister Kemayah was able to transform the Passport Section, enabling applicants to get their passports in time at a lower price.

On the basis of Minister Kemayah’s services, Mr. Watson said Women Voices’ vetting committee selected him as Minister of the Year 2020.

Reading the wordings on the Women Voices newspaper’s certificate, Madam Leila Gbati said the certificate was awarded to Minister Kemayah in recognition and appreciation of his “exceptional accomplishments, dedicated and patriotic services aimed at sustaining peace, maintaining tranquility and fostering the nation’s  building  efforts  during the year in retrospect, 2020.”

She said based on his patriotic services, Minister Kemayah has won the Women Voices’ Minister of the Year 2020-2021 award.

As the process went on, Mr. Jalloh recalled that each committee member who made a nomination was given the chance to provide some information about their nominee.

“And so the person who nominated His Excellency Saah Kemayah said the Passport Section had damaged our face, or the face of the nation in just a year’s time and when Minister Kemayah was appointed Minister of Foreign Affairs Ministry, he took 30 days to have a reform in place to restructure the section and [improve] the image of the country,” Mr. Jalloh narrated.

Beside the intervention at the Passport Section, he also gave credit to Minister Kemayah for leading other reforms at the Ministry as well as conducting a retreat for all the ambassadors, among others.

“So based on the achievements of the honorable, some who even nominated other ministers decided to withdraw their nomination … and so he was voted unanimously by the Hot Pepper Family as the institution’s Minister of the Year 2020,” he added.

The wordings on the certificate presented by Hot Pepper pointed to Minister Kemayah’s outstanding performance and unraveling contributions to nation building among cabinet ministers during the year under review.

“We anticipate that this award will inspire you to do more in the years ahead,” the certificate read.