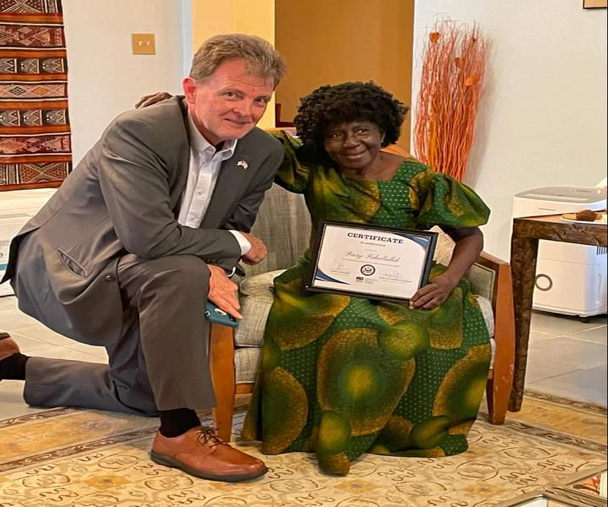 Daisy Fahnbulleh, an American Corner Kakata Coordinator, was recently honored by the US Embassy in Monrovia for her outstanding service to Liberia throughout the years.

At a dinner for all American Corners and Shelves Coordinators in Liberia, Deputy Chief of Mission (DCM) Joel Maybury presented Madam Fahnbulleh with the award.

Madam Fahnbulleh received the award from DCM Maybury since she has been in her current position since 2008.

In addition, the US Embassy revealed to the public that it will cooperate with Liberian institutions to establish American Corners and Shelves, which will sell books, magazines, and other materials from and about the United States.

Their nooks, according to them, also hold special activities such as speaker series and educational counseling. Liberians are welcome to visit, and there are currently spaces in Monrovia, Buchanan, Kakata, Zorzor, and Zwedru.

“American Corners” are regional information and programming centers that focus on American culture, history, current events, and government. On a wide range of American-focused themes, they often organize discussion groups, seminars, digital video conferencing (DVCs), poster exhibitions, and meetings with U.S. and local specialists. They also serve as a regional library for American-themed books, films, DVDs, and CDs, as well as offering free internet access and educational materials. The United States provides the equipment and materials, while the host universities give the employees and space for free.

The US Embassy in Monrovia’s Public Affairs Section has partnered with four Liberian organizations to run American Corners in the counties of Grand Bassa, Grand Gedeh, Margibi, and Lofa. Each American Corner has books, articles, and other resources from and about the United States. Computers for web-based research and word processing are also available at the American Corners. Special programs, such as a monthly speaker series and educational advice, are also available at the American Corners. Speakers for programs emphasizing American culture and policy frequently include American leaders and visiting visitors. Similarly, alumni of exchange programs and other Liberians who have visited the United States are urged to express their perspectives on crucial problems.

“The oceans that used to divide us do not divide us...

The man who saved thousands of people from HIV