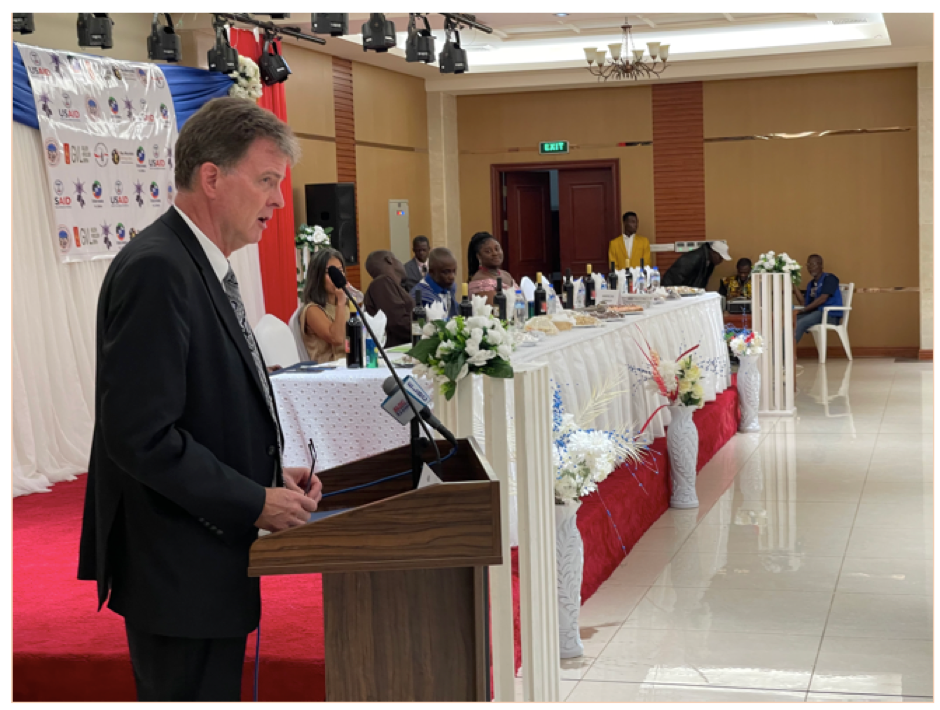 Mr. Joel Maybury, who is a former journalist, made these comments when he delivered the keynote address at the Press Union of Liberia (PUL) 2021/2022 Awards’ Night on Sunday, May 29, 2022, in Monrovia.

“Thank you for inviting me to this important event honoring Liberian journalists and media institutions. As a former journalist myself, who has faced the anger—and even threats—of readers, listeners, and public officials unhappy with my reporting, I know how important it is to take time to publicly acknowledge your efforts and to celebrate the excellent work of your peers. And please know that the United States applauds the bravery, intellect, ethics, and professionalism of journalists here in Liberia and around the world who risk their lives in defense of the public’s right to know, “he said.

He agreed that a free press is an important part of responsive and accountable democracies, since journalism is a key way to fight corruption, bring attention to violations of human rights, give the public accurate information, and hold government officials accountable.

“This is especially the case here in Liberia, which has one of the highest densities and greatest variety of public and private media in West Africa,” he claims.

Every morning, when he opens the newspaper or logs onto the internet, the deputy chief mission is confronted with the many challenges that Liberia faces today: poor infrastructure; lack of access to health and education services; corruption; limited opportunities for women, youth, and minorities; political intrigues; violence; and a slew of other issues that Liberians care deeply about.

He, however, said he reads more uplifting news about sporting events that rally citizens together; inspiring young advocates for change; local development projects that are making an impact; religious leaders who are trying to help communities and individuals find their moral compass; women who make excellent role models in their fields; and civil society actors bravely speaking out against injustices.

The U.S. diplomat reflected on Liberia celebrating its bicentennial. He has done much research into Liberian history and has come up with more angles on the unique relationship between the United States and Liberia than you can ever imagine. Many of these angles, by the way, he said, are in plain sight, on city streets, in Liberian towns, in places of worship, to name a few sources. “I would love to talk more about this history with some of you. We still have seven months to go before the end of the bicentennial, “he assures,” while remembering the 175th anniversary of the establishment of the Republic of Liberia—Africa’s first independent country—hoping more than a few of the journalists would cover these important historical milestones.

He, however, cautioned journalists not to take it for granted, particularly as freedom of expression is increasingly under threat in many parts of the world. He said authoritarian regimes use intimidation of the media and internet shutdowns, among other tactics, to prevent criticism and stifle accountability and transparency.

“Fortunately for Liberia, there are many vibrant press and media organizations—from print to radio to online—as well as dedicated reporters committed to upholding the fundamental right of press freedom,” he extols.

Quoting the US Secretary of State, Anthony Blinken, he said a free press is “the cornerstone of any thriving democracy.” Mr. Maybury said a free press bolsters democracy by holding leaders accountable, disseminating accurate information, and shining a light on corruption. He said one example of where the press can play this role is in reporting on the commitments that President Weah made at the Summit for Democracy, which President Biden hosted in December. “These laudable commitments include taking steps that make it easier to prosecute corruption; actions to address gender-based violence and female genital mutilation; enhancing legislative transparency; and promoting the political participation of women,” he said. The U.S. diplomat said during this “Year of Action,” before a second Summit for Democracy convenes later this year, the press should be following up on how the government is doing. He wants the media to inform the public about what President Weah has done toward his commitments and any progress that has been made.

A free press should also safeguard journalistic ethics, focus on facts, and serve as responsible stewards of peace in Liberia. “Without that commitment to integrity, the threat of irresponsible journalism, the dissemination of false, biased, skewed, or unverified information—particularly during a contentious electoral period—risks undoing years of progress in sustaining Liberia’s peace,” he said in tone.

According to the DCM, responsible and effective reporting necessitates the skills and long-term dedication of both young and experienced journalists committed to bringing pressing issues to public attention, speaking truth to power, and pursuing the facts wherever they lead. Speaking of facts, he said, “Please check your facts.” I like to say, “Trust but verify.”

And with your indulgence, let me pass along some other advice from a friend and a former colleague: Do your best to present a story in a balanced way. If there is an allegation being made about a subject, give that person a chance to respond. Put yourself in that person’s shoes. If you were being accused of something, wouldn’t you want to be given the chance to give your side of the story? OK, in some cases, maybe not, but the reporter should at least try to reach the subject. “Please, editors, let your readers and listeners know when something is an opinion piece, when something is an editorial, and when something is straight up reporting,” he advised.

He further expressed optimism that the honorees would exemplify those traits, and congratulated both the nominees and awardees for their achievements and contributions. He concluded by reiterating the U.S. Embassy’s commitment to continuing to support Liberia’s media through exchange programs, visiting expert speakers, and training opportunities, and through USAID’s Media Activity, which is working to enhance quality journalism and the sustainability of media houses, promote adherence to journalistic standards and ethics, and strengthen the legal environment for free media