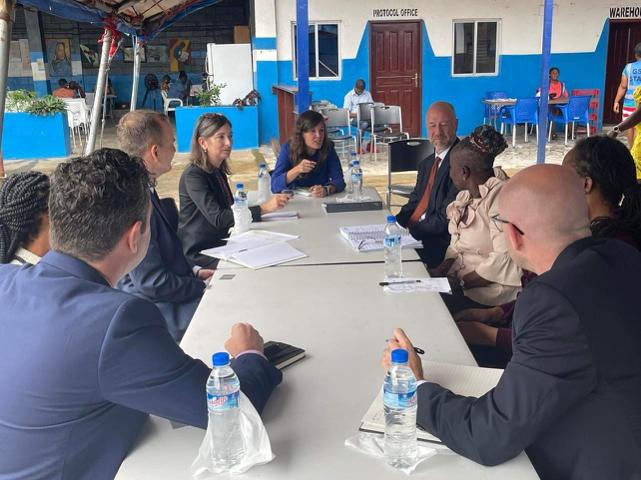 On Monday, November 7, 2022, a U.S. Government delegation arrived in Monrovia to learn firsthand about Liberia’s achievements in the fight against COVID-19, such as being one of the first three African nations to reach the WHO goal of vaccinating 70% of its population against the disease.

Later, they visited the General Services Administration (GSA), one of the largest COVID-19 vaccination sites in the country, where they met with Madam Mary Broh, the GSA’s director general. Broh, who is also the National Coordinator for COVID-19 Response in Liberia, thanked USAID, the CDC, and other donors for their support of Liberia’s COVID response efforts. She added that approximately 170,000 people have been vaccinated at the GSA, noting that lessons learned from the fight against the 2014–2016 Ebola outbreak, such as the use of local voices in prevention and treatment messaging, have been useful in combating COVID-19.

In Monrovia, the delegation also met with the Montserrado County Health Team. Dr. Adolphus Clarke, director of the Liberia Immunization Program, briefed them on successful COVID-19 interventions in Montserrado, such as community-based awareness campaigns to combat vaccine reluctance. Executive Director Tritter stated that she and the other members of her delegation were ecstatic to be in Liberia to witness firsthand how the country, with the assistance of development partners, mounted a vigorous campaign against COVID-19. She lauded Liberia for being one of the first nations to achieve the WHO target of having 70% of its population vaccinated against COVID-19.

Tritter and other members of the delegation will join Health Minister Wilhelmina Jallah, World Health Organization representatives, and other donor partners on Tuesday to open a new oxygen production plant in Bomi. With assistance from USAID, the plant will provide medical oxygen to the people of the western region of Liberia. It is the second oxygen production facility supported by USAID in Liberia. President George Weah inaugurated an oxygen plant on Bushrod Island in Monrovia with funding from the German, Canadian, and American governments on October 27. This facility will serve the residents of the counties of Montserrado and Margibi. Wednesday, following the opening of the Bomi Oxygen Plant on Tuesday, the delegation will participate in a COVID-19 vaccination campaign at Lango Lippaye High School in Kakata

“Dismiss All in Charge at LISGIS”