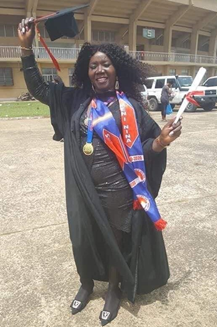 MONROVIA – A recent graduate of the Business College of the state-run University of Liberia (UL), Nancy Miller, along with seven others believed to be related to her, were all discovered dead early Thursday, 26 February at her Coal-tar Field residence, behind the SKD Sports Complex in Paynesville City.

Police authorities have confirmed the deaths of the eight persons, and have disclosed their cost of death as being “carbon monoxide poisoning.”

Residents of the Coal-tar Field Community woke up Thursday morning to the shocking death news of eight persons, including two minors, Favor Johnson and Sabah Kpaka, believed to be between the ages of 12-16, Nancy Miller, a recent UL graduate, Angel Miller, Yah Miller, Varney G. Kamara and two others yet to be identified.

Eyewitnesses’ account indicate that following her graduation from the UL, Nancy had thrown a party that ran through the evening hours of the previous day, and that after the party, the eight persons went indoor for the night’s rest with a generator left on in the kitchen of the two bed-room house where the tragedy struck.

Liberia National Police (LNP) spokesperson Moses Carter told a press conference at the Central Police Headquarter on Capitol Hill, Monrovia that the LNP regrets the tragic demise of the eight persons, saying in a sad mood, “The leadership of the LNP headed by Inspector Patrick Sudue, we want to use this medium to express our deepest condolences to the family, friends, and relatives of our citizens who met their untimely demise this morning especially for the graduate who graduated on Wednesday from the University of Liberia who meet her untimely demise, please accept our deepest condolences.”

Carter disclosed that on Thursday at approximately 6 AM the LNP was alerted of the deaths of some citizens in the Coal-tar Field, ELWA Community, prompting the LNP to dispatch to the scene a team of police investigators, including its Forensic Team and Crime Against Person Section to ascertain what had obtained.

Following the conduct of investigation by the police investigators, Carter divulged that it was established that the eight died as a result of carbon monoxide poisoning due to a generator that was left on while they went to sleep.

He said the corpses of the eight persons were at the time taken to the ELWA mortuary for preservation, awaiting the arrival of relevant family members to identify the deceased individuals and take charge of their lifeless bodies.

The police spokesman used the occasion to warn citizens and residents of Liberia to be mindful of the use of power generators, stressing that the necessary safety measures should always be observed when using generators.

“We want to use this medium to urge those generator operators as much as it is convenient to use generator in running your day-to-day affairs or light your homes, the necessary precautionary methods have to be in place,” Carter emphasized.

“It is saddened that today we can sit here and talk about the death of eight of our citizen which is very tragic, so we want to use this medium to appeal to those of our citizens who are running generators to follow EPA standards. Your generator must have a space where the smoke can get out where you are running it, we are not going to have a situation where you are running a generator in a concealed area where the smoke is not getting out but coming back to the folks; that is totally dangerous, this is for your own safety and to protect your life,” Carter maintained.