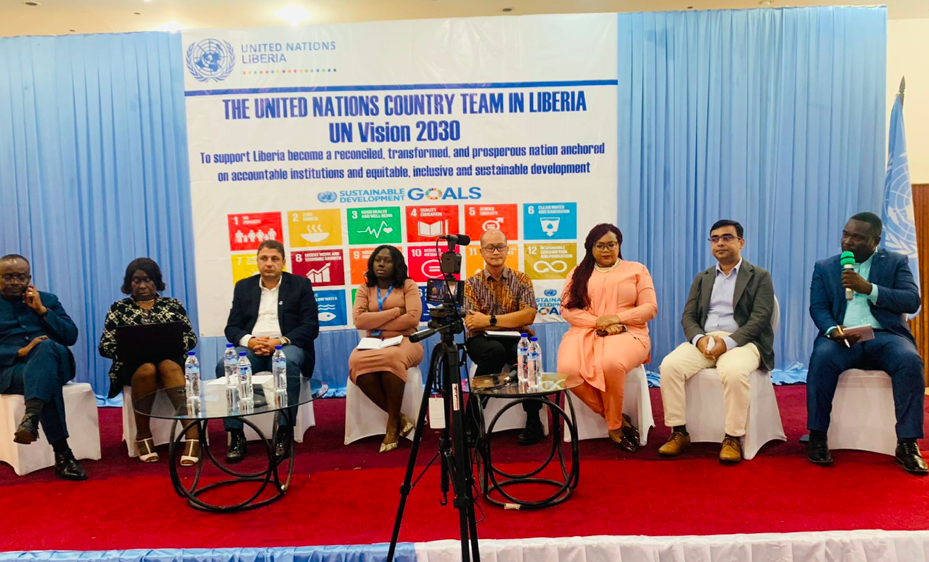 An all-day discussion between the UN and Liberia’s business sector has come to a conclusion. Its goals were to increase mutual knowledge of how each organization operates and to identify areas where the two parties may work together to develop Liberia.

The debate, which took place on August 23, 2022, at Monrovia City Hall, brought together UN agencies and for-profit corporations in order to acknowledge the crucial contribution the private sector makes to Liberia’s growth and to strengthen ties with the UN.

The dialogue’s main goals are to identify opportunities for collaborations and partnerships between the UN and the private sector, develop a shared understanding of the work that both organizations do in Liberia, establish a framework for ongoing engagement, and come to consensus on important recommendations.

The UN’s resident coordinator, Mr. Neil Scott, stated in his opening remarks that the event was a major accomplishment for the organization, which has been present in the nation for more than 20 years.

The UN Resident Coordinator stated that although having a shared goal of assisting the Liberian people in seeing future growth, prosperity, and optimism, there are numerous areas of worry between what the UN does and what the private sector performs.

He pointed out that the UN Corporative Framework estimates it will spend around US$797 million on Liberia’s sustainable development and that it is currently more than halfway through the plan.

Everyone has realized in recent years that there are significant difficulties, like COVID, economic challenges, difficult livelihoods, poverty and inequality, as well as climate change, which will affect everyone, according to Mr. Scott.

In conclusion, he said, “we need all of us to work together as loosely as we can in a world that really resonates solidarity and shows partnership to get through these challenges together,” adding that the time had come for such discussion as a new inclusion to how they can forge a partnership stronger in what they do, which is to help people improve their lives, noting that this is the common agenda they face.

Our shared goal is equal opportunity for women and girls, social protection, education, skill development, and decent job, thus we must acknowledge your contributions in order to achieve that goal. The UN Resident Coordinator stated, “But we must ensure that all of these objectives are met, including achieving universal access to healthcare and the internet. I am certain that we can resolve all of these issues together.

He emphasized that now is the moment for the UN and the private sector to fulfill their commitments and live up to their pledges in order to ensure that they create a stronger network and more inclusive cooperation that is grounded in the values they share.

The UN Resident Coordinator continued by saying that he was looking forward to a dialogue that will uncover solutions to these issues as well as the success the nation will experience if predetermined goals are achieved.

First Vice President of the Liberia Chamber of Commerce (LCC), Ahmed Wazni, congratulated the UN Resident Coordinator for arranging the UN private sector conversation, noting that it was the first of its type since Liberia’s postwar era and included the LCC as a lead participant.

The LCC, according to Mr. Wazni, anticipates good discussions and specific recommendations that will strengthen collaborations between the business sector and the UN in Liberia and advance the country’s economic and social development.

He claimed that the lack of knowledge about the UN and its agencies’ activities in Liberia within the corporate sector makes it challenging, if not impossible, to “window” the tremendous advancements made in democratization, national reconciliation, and peace.

The lack of interaction between the United Nations, development partners, and private sector actors, according to Mr. Wazni, has greatly hampered Liberia’s economic development and advancement.

In order to advance Liberia’s economic development, which is now facing many obstacles, he told the audience that they needed to create a sustainable platform that would deepen and expedite relationships between the United Nations and the private sector.

The LCC welcomes the UN initiative, Mr. Wazni continued, and supports the aim of achieving and developing a shared understanding of the work of the UN and the private sector, identifying opportunities for partnership, and deciding on opportunities for mutual engagement on important national recommendations.

The PAPD objectives of the Liberian government are supported by the country’s private sector, which also helps to advance the Sustainable Development Goals (SDGs). Over the years, there has only been a little amount of cooperation between the UN and the private sector in Liberia, but there is always room for improvement. Understanding the UN’s operations in Liberia and learning more about them could be useful to the private sector. Similarly, the Sun hasn’t done much to aid in the social and economic development of Liberia’s private sector. To help achieve the SDGs and the national development priorities, there are ways to strengthen this relationship. The UN may use the private sector’s flexibility in service delivery and innovation to forge a commitment for greater private and public sector cooperation in tackling Liberia’s development difficulties.

Educate HER: Promoting Gender Equity and Equality in Education

“Overcome Your Fear of Intimidation”