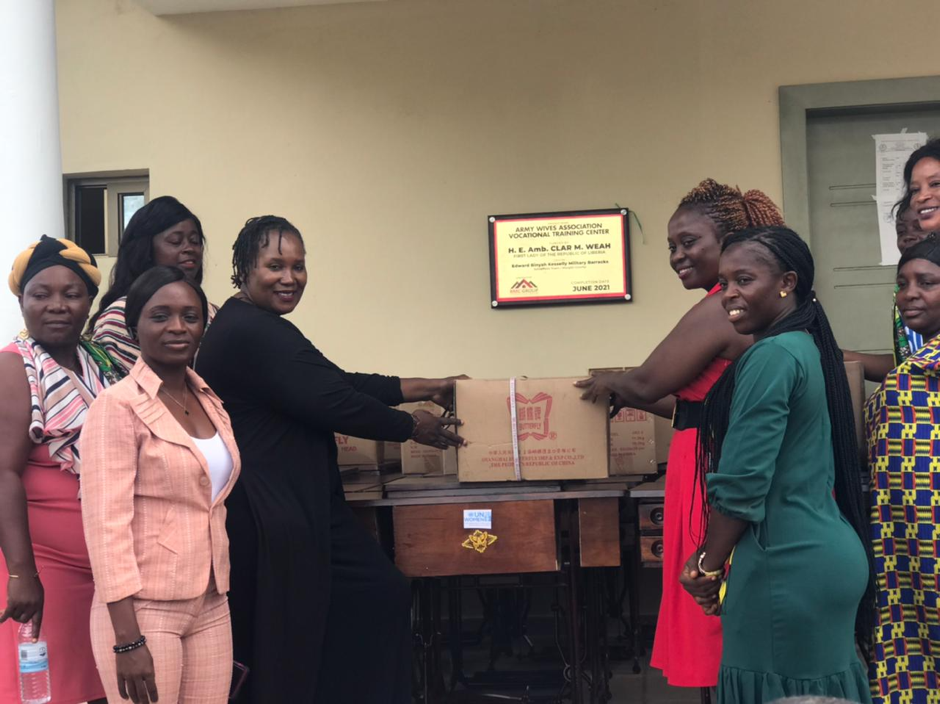 UN Women Liberia has pledged to continue working with all stakeholders to achieve gender equality and the empowerment of Liberian young women.

Ms. Pamela Mkwamba, UN Women’s Deputy Country Representative in Liberia, made the announcement on Tuesday, May 24, at the EBK Military Barracks in Margibi County during the Handover Ceremony of vocational equipment to the Army Wives Association Vocational Training Centre (AWA-VTC).

15 sewing machines, 1 desktop computer, 1 printer, and 2 sets of banking plates were among the vocational equipment donated.

During the equipment handover, Madam Mkwamba stated that on April 13, 2022, UN Women accepted an invitation from Liberia’s First Lady, Madam Clar Marie Weah, to attend the official dedication and turning over ceremony of a vocational training center for the Army Wives Association, at which time UN Women joined President Weah and other dignitaries for the auspicious occasion aimed at empowering partners of men serving in the Liberian Armed Forces.

Madam Mkwamba stated that during the dedication of the vocational training center, UN Women committed to provide an initial contribution to the Army Wives Association to help with the institution’s operationalization, and that “one month later, we have returned to make good on our promise of support.”

“Today, we have come to hand over some items that we think will help to assist the ongoing efforts.” A desktop set, a printer, a sewing machine, and baking pans are among the stuff I’ve brought. It is believed this small donation will contribute to the work already being done at the center for women’s empowerment.

She stated that the donation should be viewed as the start of a partnership between UN Women and the Association, and that they look forward to working with the Army Wives in the not-too-distant future.

She also admired the dedication and hard work of the employees who administered the vocational training center.

Mrs. Josephine J. Kowo, President of the AWA, also expressed the Association’s gratitude and appreciation to the First Lady, whom she claimed is the project’s major sponsor, and the UN Women family for their tangible support in her welcome and opening remarks.

Mrs. Kowo guaranteed that the materials would be improved and empowered in addition to being used for the intended purpose.

Mrs. Alfreda Nmah, the Administrator of the AWA-VTC, thanks the Armed Forces of Liberia, as well as development partners like the UN Women family, Hon. Tarponweh, District # 1 Margibi County, Hon. J. Emmanuel Nuquaye, Senator Marigibi County, Hon. Rosana Schaack, Hon. Ruth Collins, the Jomah Samuels foundation, and all others, for their continued support to the institution over the years.

The AWVTC was founded in 2019 as a self-help initiative to empower spouses and dependents of AFL personnel to contribute to the upkeep of their homes and society, according to Mrs. Nmah.

She went on to say that the school offers women and men the chance to learn money-making skills such as catering, tailoring, cosmetology, computer software, interior decoration, soap making, and CCTV installation, among other things.

“This organization has thrived through several hurdles over the last three years, including restricted resources to operate with and minimal financial support, among others. It’s no wonder that the facility has remained operational despite these difficulties. We now have our own contemporary facility thanks to the efforts of our first lady. “On behalf of the Army Wives Association’s members and officers, we want to express our gratitude and appreciation to Her Excellency Madam Clar Marie Weah, our First Lady, for the construction of this beautiful building,” she said.

Ms. Dorbor also urged other institutions to come in and help the country’s women and girls, particularly the Army Wives.

She emphasized that others should follow UN Women’s lead and come in to support First Lady Weah, whose goal is to empower women and girls throughout Liberia.

“This initiative is not only in Montserrado; we want to expand it to other countries so that women and girls can benefit,” she says. “Educating a woman or a girl can benefit a nation or the world, and empowering them is a great thing to do because anything men can do, women can do as well.” We hope to be lifelong partners. Let us rally behind our Liberian women, who are truly remarkable. “Women, don’t just sit there; do something positive,” Ms. Dorbor concluded.

Col. Theophilus Dana, Commander of the AFL’s 23rd Infantry Brigade, congratulated the First Lady’s Office, Madam Weah, for such a great initiative as a woman to put out such beautiful buildings for their spouses in order to empower their wives to serve as helpers to the nation’s valiant force.

Maj. Rogersim also praised UN Women for having the foresight to recognize the value of their wives and for empowering them with such excellent materials.

He promised that the materials would be wisely used, emphasizing that the women have the desire and motivation to empower themselves to become someone good so that they can assist their husbands, and that what they will learn here will empower the economy and society.