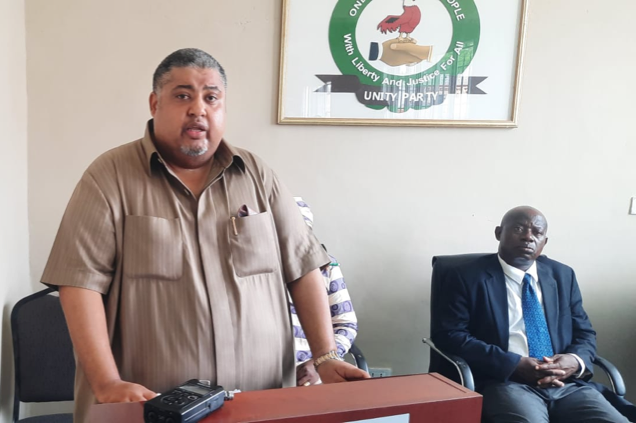 Any attempt by the National Election Commission to deny them the opportunity and right to represent the people of Lofa County will be greeted with vigorous political opposition and sustained legal action, according to the former ruling Unity Party.

“We were robbed of our senatorial victory in Lofa.” The citizens of Lofa were subjugated and denied their suffrage. However, the UP will no longer sit supinely and allow the rights of the people it represents to be trampled upon by a system marred by duplicity, intolerance, and a clear intent to embroil the democratic process in chaos. Lofa being denied the opportunity and right to again represent the people of Lofa will be met with stiff political opposition and sustained legal action. These rights are guaranteed by the constitution,” UP warns.

The Unity Party entered into a collaboration in 2020 with three other political parties: The All Liberian Party (ALP), Alternative National Congress (ANC) and Liberty Party (LP), forming the Collaborating Political Parties. Pursuant to Section 8.5 of the New Elections Law of Liberia, the National Executive Committee of the Unity Party, by an absolute majority of its membership, did sign and file with the National Elections Commission a resolution to form an alliance with the ALP, ANC, and LP.

On March 24, 2022, Mr. Musa Hassan Bility, Chairman of the Liberty Party, and Martin Saye Kollah, Secretary General of the LP and the Alternative National Congress (ANC), after removing the UP and ALP from all forums and chat groups, wrote a letter (not a complaint) to the Elections Commission seeking clarity and advice on the status of the UP and the ALP within the CPP, asking the NEC not to allow the UP and the ALP to register candidates in their own names for the Lofa bi-election.

Meanwhile, on March 25, 2022, Unity Party received a notice of assignment to appear for a hearing on March 28, 2022, before Hearing Officer Atty. Fomba Swaray of the National Election Commission of Liberia.

At the hearing, UP lawyers argued that the case was manufactured by the NEC out of a simple letter written by Musa Bility and ANC. Therefore, the case should be thrown out on two major counts.

“That the Elections Commission is an administrative body and hence cannot declare rights as was requested by those who wrote the letter. Lastly, that the elections commission was not an advisory board and hence was not in the position to render advice to any political party”.

After listening to the arguments, the NEC Hearing Officer ruled and insisted that they would still hear the case, something the UP termed as massively baffling as the two paramount reasons for which the letter was written were ruled against, adding that what other case the hearing officer wants to hear again remains a misery.

Speaking at a press conference on Tuesday, April 12, 2022 at the UP headquarters on Broad Street, UP Chairman Mr. Amin Modad stated that on December 20, 2021, the National Executive Committee of the Unity Party voted decisively to withdraw from the Collaborating Political Parties (CPP) after all efforts to resolve internal issues failed, and it was unequivocally clear that the CPP was evolving in ways that did not represent the UP’s values, aspirations, and philosophy.

He said that the decision to withdraw was a resolute moral protest against the alteration of the Framework Document that embodied the very collaboration and its credibility, adding that their action to withdraw was in line with their constitutional right and in the interest of the people they are obligated to serve.

Chairman Modad noted that in keeping with the rules and guidelines set out by the National Elections Commission (NEC), the Unity Party submitted a NOTARIZED RESOLUTION signed by more than 2/3rds of its Executive Committee to the NEC informing it about the party’s withdrawal from the CPP, prudently followed all due processes, and subsequently informed all parties in the collaboration of their withdrawal.

He said the All Liberian Party, headed by Benoni Urey, ALP, as a constituent member of the CPP, complained that the CPP Framework Document filed with the National Elections Commission was altered.

Chairman Modad disclosed that an Investigative Committee of the CPP found that the CPP Framework Document filed with NEC by the ANC on behalf of the collaboration was different from the original five copies signed and approved by the constituent parties.

He pointed out that all efforts by the three other constituent parties, ALP, LP, and UP, to get the ANC to acknowledge its fault and settle for a resolution of the problem for the success of the collaboration have failed.

“The Unity Party cannot be bound by the Framework Document filed with the NEC because the party did not sign it and finds its authenticity questionable. Whereas, pursuant to Article 17 of the Constitution of Liberia, the right to associate or refuse to associate in political parties, trade unions, or other organizations is a fundamental right that cannot be enjoined,” Chairman Modad noted.

“After the submission of the resolution, the NEC requested the UP to meet three requirements in order to complete its withdrawal from the CPP: Submit an indemnity bond valued at $100,000.00. Submit the party’s bank statement so that the elections commission will be able to verify if the party meets the required bank balance of US $10,000 minimum or its equivalent in Liberian dollars, and invite the NEC to inspect the party’s headquarters,” according to Chairman Modad.

He said the Unity Party, being a law-abiding institution, fulfilled all of the requirements and the Elections Commission has since been operating with the UP as an independent registered political party under the laws of Liberia.

The Party said upon the publication of the guidelines for the Lofa County by-election, a vacancy created in the Liberian Senate as a result of a politically orchestrated witch-hunt against our candidate, Brownie Samukai, who democratically and legitimately won the seat, it submitted the completed form required for nominating its candidate, Hon. Galakpai Kortimai, for the by-election scheduled for May 10, 2022. “For their first count, we thought they were being extremely disingenuous as the UP had written to the 3 other parties, duly informing them of its withdrawal from the CPP,” he notes.

Chairman Modad described the entire Lofa County by-election legal process at the National Election Commission as a very clear and scandalous attempt to target and eliminate the Unity Party and its Standard Bearer, Amb. Joseph N. Boakai, from the 2023 general and presidential elections.

According to the UP Chairman, even after they stated very clearly in a sworn statement to the NEC that the Framework Document submitted to the National Elections Commission was not the same Framework Document signed by the Unity Party on May 19, 2020, the Elections Commission would want to hold them by a clause in a controversial document that they are not a signatory to, knowing fully well that fraud vitiates everything.

“So the litmus test for this grand scheme of exclusion of the UP in the 2023 Presidential Elections is the Lofa County senatorial bi-election. Intriguingly, violating its own guidelines and timeline, the National Elections Commission has deliberately refused to publish the provisional list of registered candidates, which should have been done on April 4, 2022,” Chairman Modad asserted.

He said that the Unity Party wants to make it very explicit and pray that this claims the urgent attention of the government of Liberia as well as the international community, specifically the Economic Community of West African States (ECOWAS), European Union (EU), and the United States government (US).

Mr. Modad reassured partisans and sympathizers that no matter how deep and well planned this grand conspiracy to exclude the UP from the by-election in Lofa and subsequent elections, the Unity Party will do everything within the ambit of the law to ensure that they partake in every election in this country.

Chairman Modad further indicated that even more emphatically, they will field candidates in the Lofa by-election and the 2023 Presidential Elections under the banner of the Unity Party, adding that the Unity Party represents the aspirations and political will of hundreds of thousands of Liberians.

“There is a lot more that needs to be done”