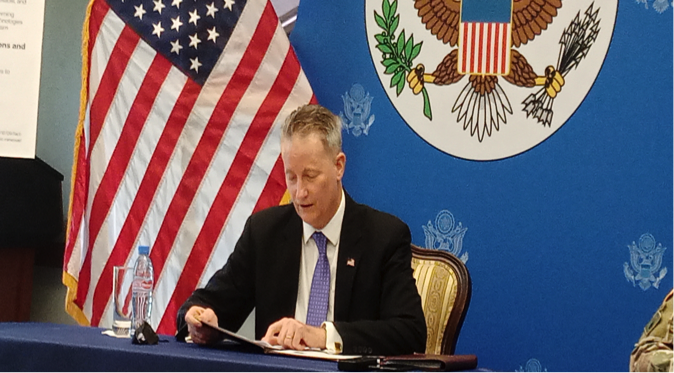 Michael A. McCarty, the US Ambassador to Liberia, is urging civil society organizations and every Liberian to engage with the government of Liberia to ensure that President Weah’s commitments are met.

He made the announcement at a press conference held at the US Embassy in Monrovia on Tuesday, February 8, 2022.

President Weah, according to the Ambassador, made several commitments at the Summit for Democracy, a global gathering of heads of state, government representatives, civil society leaders, and business officials hosted by President Joe Biden on December 9, 2021, to discuss the challenges and opportunities facing democracies in the twenty-first century.

According to Ambassador McCarty, the Liberian leader promised to amend the anti-corruption act to grant direct prosecutorial powers, continue efforts to end gender-based violence, engage with traditional leaders to end all forms of harmful traditional practices, and propose an anti-female genital mutilation bill at the Summit.

He also stated that the Liberian president is dedicated to ensuring justice, openness, and accountability in election funding, as well as promoting the inclusion of more women in the electoral process and in key government positions, and making all legislative votes public.

Ambassador McCarty noted that the December summit was the first, and that the second would be held in December of this year, hopefully in person, emphasizing that 2022 is the year of action to advance the summit goals, defend against authoritarianism, address and combat corruption, and promote respect for human rights.

According to him, each of the invited leaders, including President Biden and President Weah, made specific announcements about substantial internal reforms and international activities that will take place this year.

“We believe they are excellent examples of specific and meaningful actions that will strengthen democratic resilience right here in Liberia,” he said of President Weah’s pledges.

Ambassador McCarty emphasized in his statement that during this year of action, Liberia’s civil society will need to work in partnership with the Liberian government to ensure that progress on these important commitments is made, and that in order for that to happen, they will need to ensure that the Liberian people are aware of the commitments, and that the media will follow the progress.

“It will serve no one if you wait until December 2022 to check in on whether or not they were achieved. It will be too late at that point. Instead, I urge you-all to do your own part in growing democratic resiliency here in Liberia and commit to using your platform to monitor these efforts and report back to us and the public,” Ambassador McCarty admonished journalists.

Ambassador McCarty went on to say that one of President Weah’s Summit objectives was to improve legislative openness, adding that it is a critical goal that will assist strengthen oversight, increase accountability, and boost citizens’ faith in their elected officials.

As a result, this month, the Senate Pro Tempore proposed legislation-requiring senators to hold public votes on presidential nominee confirmation. After the Senate failed to pass the bill a week later, he added, the media had an opportunity to recall the President’s vow and look into whether any fresh attempts to improve legislative openness were being made.

He added that this is the best way for the public to reliably track progress and decide how to help to make sure that President Weah’s commitments are met in time for the next summit.

“Democracy requires effort from the government as well as the populace, and the media are an essential connector between the two, and they want to make sure that all Liberians are well aware of the commitments made by President Weah so that in December 2022 they will be able to assess how much progress was made on those commitments.”

He further stated that it was at the opening of the summit that President Biden announced the Presidential Initiative for Democratic Renewal, which is an expansion of the US government’s effort to defend, sustain, and grow democratic resilience with like-minded government and non-government partners and centers on five areas of work crucial to the functioning of transparent, accountable governance, including supporting free and independent media, fighting corruption, bolstering democratic reformers, advancing technology for democracy, and defending free and fair elections and political processes.

“There are quite a few data for both of these initiatives, as well as a complementary set of initiatives that the US Department of State announced. On the Summit for Democracy website, there is a tab for official intervention where you can find videos from each of the participating heads of state and their own commitments, which include President Weah,” he said.

Meanwhile, on the issue of the vaccination campaign in Liberia, Ambassador McCarty disclosed that Liberia is coming out of the fourth wave, which is great news, and hopefully it is the last wave, which they simply do not know yet.

He said that what they know is that vaccines are the best tools to try to make a reality and they are safe and effective.

Accordingly, he said the United States is very proud to support Liberia’s efforts to protect all Liberians against covid-19 which they have donated nearly 900,000 doses of covid-19 vaccines to Liberia both the one-shot Johnson and Johnson and the two-shot Pfizer vaccines.

He congratulated the Ministry of Health for the remarkable job they have done by containing the spread of COVID and healthcare workers across the country who are helping to distribute the vaccines.

Ambassador McCarty said that more than 1 million Liberians are fully vaccinated, but there are many more Liberians eligible to take the COVID-19 vaccine who still have not been vaccinated.

“Liberia is Special to Israel”