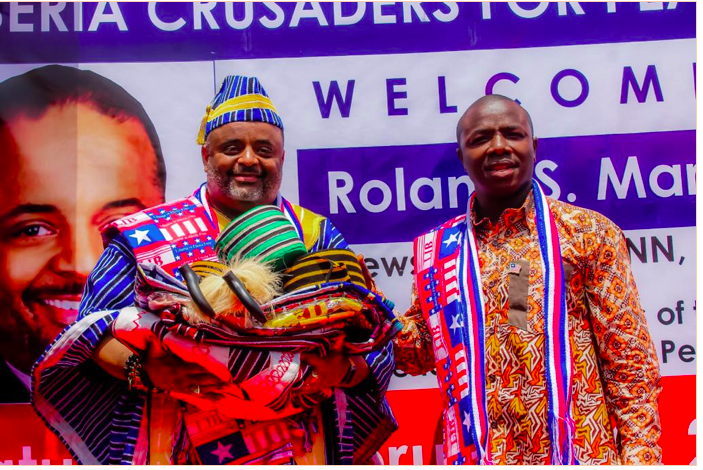 The Liberia Crusaders for Peace (LCP) has honored former CNN reporter and now Chief Executive Officer (CEO) of Black Star Media Network, Mr. Roland Sebastian Martin, on Saturday, February 18, 2022, as part of an effort to promote tourism during the bicentennial celebration, and called on him to serve as an ambassador in promoting Liberia’s image for investment and economic development.

LCP honored Black Star Media’s CEO with the title of CHIEF BARWOLLOR in respect of his activism. Martin supposedly employed mainstream media to promote human rights, democracy, and the rule of law in Africa and around the world, according to LCP.

Chief Barwollor, named after Chief Flomo T. Barollor of Swakoko, Bong County, is one of Liberia’s most prestigious titles. The Crusaders for Peace, led by Traditional Juli Endee in partnership with the National Traditional Council, bestowed the honor onto Martin and gave him the traditional name CHIEF Roland Flomo T. Barwollor Martin, making him a Bong County son.

Julie Endee, Liberia’s Culture Ambassador and Traditional Queen, who presided over the ceremony, characterized Martin’s acceptance of the distinction as an example of humanity. She explained that it symbolizes the ongoing historical links between Liberia and the United States. She claims that his presence represents the return of free blacks to Liberia between December 1821 and January 1822, which led to the founding of the continent’s first republic.

Meanwhile, Amb. Endee stated that the bicentennial serves as the unique platform to tell the living story of the continent first Republic, in terms of its formation, culture, tourism and the golden investment opportunities to the world.

Queen Juli claimed Liberia is rich in gold, diamonds, rubber, timber, and a nice climate that promotes agriculture, as well as magnificent coastlines and tourism destinations across the country, and she asked the American media guru to act as a promotional ambassador.

We want to sincerely request that you serve as our ambassador to promote Liberia, the image of its emerging economy, and direct investment opportunities to the private and public sectors, knowing that there is no sector in Liberia without an urgent need and opportunity for investment,” Ambassador Endee charged Martin.

In addition to honoring Mr. Martin on behalf of the traditional people of Bong County through the Ministry of Internal Affairs and the Liberian government in general, Amb. Endee also donated one acre of land in Tototal, Bong County—the home of Chief Flomo T. Barollor, after whom Mr. Martin was named. “We hope you will love and use it for development for the women and children of Liberia,” Queen Endee said of the land donation.

In his remarks at the ceremony, Monrovia City Mayor Jefferson Koijee said that the accolade could not be bestowed on just anyone who comes to Liberia, but rather on those with distinct personalities who continue to contribute to Africa’s growth. The young mayor joked that the honor bestowed on the Black Star Media CEO was intended to not only portray a positive picture but also to hide any negatives. Mayor Koijee took advantage of the opportunity to greet Martin and assure him that Liberia is willing to share anything that will help the country prosper.

Chief Roland Flomo T. Barwollor Martin accepted the honor and gifts, assuring Liberians that his decision to become a journalist nearly four decades ago was to “tell our own story,” much like the nation’s first black newspaper, the “FREEDOM JOURNAL,” which had the lead article “WE WISH TO PLEAD OUR OWN CALLS, TOO LONG HAS OTHERS SPOKEN FOR US.”

Mr. Martin indicated that he warned the government before to the bicentennial celebration that foreign mainstream media such as CNN, ABC, FOX, and others would not cover the event. “It’s a shame,” he continues, “that we have to ask people who don’t look like us to recount our story.” “If we rely on someone else to tell our tale, they have complete control over it, and how they tell it is defined by what is told.”

Mr. Martin stated he will launch a healthy story-telling documentary similar to what he did in 2019, during Ghana’s year of return, with profound certainty that the stories of Liberia will be appropriately recounted through a multi-pack documentary series on the bicentennial.

Individuals of the same race and color must tell their own stories, rather than waiting for stories to be recounted by people who do not look like them, Martin concluded.

Meanwhile Mr. Martin who has more than 1.3 million followers on social media, began flooding his pages with video footages and beautiful images from major historical and tourism sites he has thus far visited in Liberia.