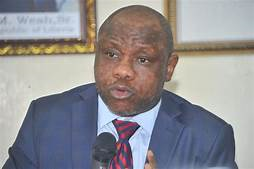 BARCLAYVILLE – The Ministry of Finance has approved US$100,000  for the renovation of the Barclayville and Sasstown High Schools in Grand Kru County, the government-run Liberia News Agency (LINA) reports.

The work on the two public high schools is a result of Grand Kru County Electoral District #2 Representative and Deputy House Speaker, Cllr. Jonathan Fonati Koffa’s vigorous engagements with Central Government for improvement of the education system in his district.

The Deputy House Speaker said the rehabilitation was prompted by the deplorable condition at the two public institutions of learning in the county.

Cllr. Koffa indicated that revamping the two schools will address conditions such as leakage of roofs, and inadequate sitting capacity to provide better learning environment for students.

The Grand Kru District #2 lawmaker said his engagements and advocacy with the Liberian government is in fulfillment of his 2017 campaign promise to help strengthen the county’s education sector and equip the five high schools with libraries and laboratories to enhance students’ performance during public exams.

Meanwhile, Representative Koffa has lauded the Government of Liberia for granting his request, noting that it is in line with the government’s commitment to strengthening the education system throughout country.

The Deputy Speaker said: “Since the establishment of the Sasstown High School in Grand Kru in 1982, it has not undergone any major renovation.

The current condition of the two senior high schools is said to be disappointing to both students and administrators who complain that during rainy days normal academic activities are disrupted due to the poor state of the schools.

The District #Two Representative called on the two schools’ authorities to collaborate with the contractors for the successful implementation of the project.

In response, several senior high school students and senior staffers are commending their Lawmaker for prioritizing education within his district and the county at-large.

The students noted that Representative Koffa’s contributions towards the education sector are massive, including award of scholarships to young Liberians who cannot afford to enroll in schools.