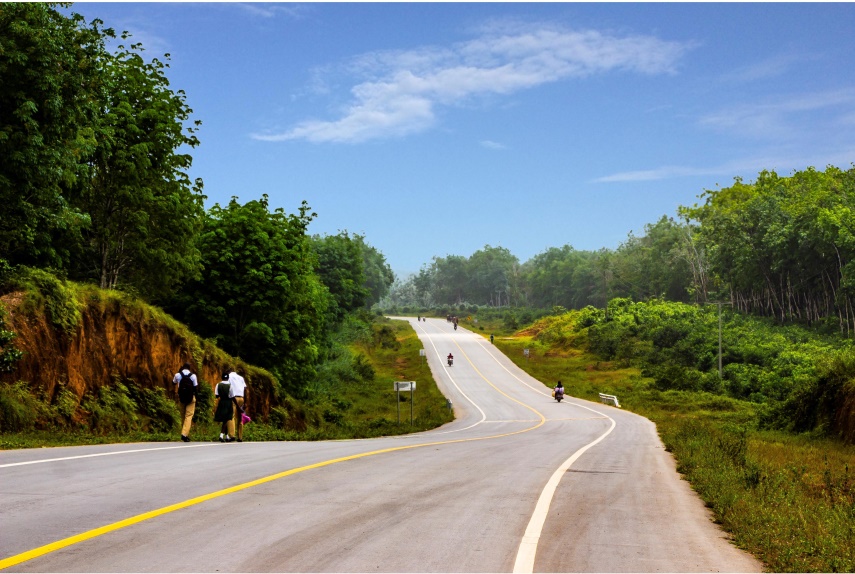 The new Fish Town to Harper Road in Maryland County has stirred up hope for residents, businesses and institutions alike, who until a few months ago were constrained to live, work and travel on roads that took hours, and sometimes days, due to potholes, mud traps, heavy dust and danger at almost every point.

Today life is better, says many, as children laugh and talk on their way to school in crisp clean uniforms, while market sellers conduct business in a dust free environment, vehicles experience less wear and tear, and businesses are seeing an upswing in their bottom-lines.

This is the result of the US$55.4 million Fish Town to Harper Road Project, of 66 kilometers of road that runs from Karloken to Harper City and Harper to the Cavalla Customs, funded by the African Development Bank.

The construction process was managed by the Ministry of Public Works, with China Railway #5 as its construction contractor and Comptran Group, their engineering consultant.

The high quality asphaltic roads were completed in November 2019 using the best quality materials and highest international standards, according to Harding.

Fifty kilometers run from Karloken to Harper, and 16 km from Harper to the Cavalla Customs, where Liberia borders Cote d’Ivoire.

Tubman University, established in 1978, boasts of six colleges in a beautiful and serene setting along the Harper Road.

According to the University’s President, Dr. Wreh Wilson, they are a direct beneficiary of the new road, socially and economically.

“Life has changed in this part of the country,” he said, adding, “More students are coming now to the University. Our students from Pleebo to Harper lives have been impacted…our vehicles are doing well on the road…the mud is not there anymore…the dust is not there…people are happier,” he continued.

“They will say we went from one to one thousand. We don’t have to repair our buses every month. Sometimes they got stuck for days, but that doesn’t happen anymore. Kids can dress nicely and come to campus and they’re clean. People are not coming late to class. Overall life is better…it’s fun living here,” said Dr. Wilson.

For the Cavalla Rubber Corporation, one of Liberia’s largest agriculture companies that exports both rubber and oil palm into nearby Cote d’Ivoire, the road has made a significant impact on both efficiency and revenue.

Kwabena Mensah, Technical Manager for the Company stated that prior to the opening of the road, it would take nearly 2 hours for a truck transporting rubber or oil palm to reach the Cavalla Customs, from their operation.

Today it takes only 20 minutes, according to Mensah, who adds that the project has also dramatically reduced damages to vehicles and delays in the operation.

“We are making easy trips to Harper and the Border,” said Mensah, adding, “commitments with our partners have also been facilitated. The road is bringing about development.”

Probably those breathing the greatest sigh of relief as a result of the pavement of the road, are motorists who ply the roads daily for business or private trips. Excited passengers are seen boarding the new National Transport Authority (NTA) bus, a free bus system never seen in this part of the country till now. “The NTA has gotten so attracted, they have done an extension of their buses to Maryland and have started running already,” said George Prowd, Superintendent of Maryland County.

“A trip that used to take a whole day from Harper to Pleebo, now takes 15 minutes,” he said.

Cecelia Smith, a Harper resident and seafood vendor located in Baroken Market along the road, summed it up best by saying: “it’s super, No mistakes on this road.”