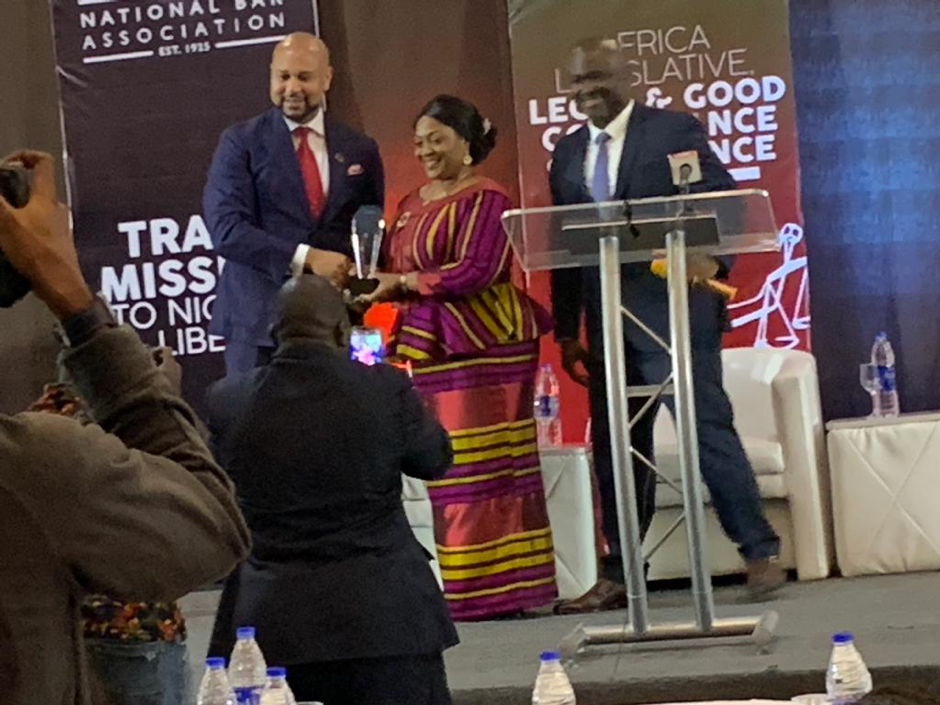 According to a dispatch, the ALM honored VP Howard-Taylor for her stellar leadership qualities and unwavering advocacy for gender equality in Africa.

The award ceremony for the Vice President was part of the ALM’s Africa Legislative and Good Governance Conference on the theme “Policy, Justice, and Global Cooperation for Building Back Better.”

According to the ALM, the conference’s purpose was to examine “the role of the parliament, judiciary, and other agencies of government in promoting fast-tracked sustainable economic development in Africa after the pandemic induced disruption.”

The conference also highlighted the interplay of the law and lawmakers in promoting good governance in Africa while also evolving solutions to some of the continent’s challenges. “

She said development challenges could be overcome with the political will to overcome adversities.

She emphasized the rule of law as the glue that could propel legislative aspirations and dispute resolution in Africa. She also cited some challenges of the RECs and the Community Court of Justice, which is an institution of the Economic Community of West African States (ECOWAS), to make this point.

The Vice President said what was needed to overcome legal challenges was the adherence to implementable enabling rules that are acceptable and binding on all Member States.

“In the end, integrative policy, justice, and African cooperation were required for the development of strong, resilient, and sustainable economies,” she emphasized.

She concluded that the political will of African governments to implement measures that can overcome adversities based on the rule of law was needed to enforce laws that would benefit all Member States in promoting sustainable human development.

The event was co-sponsored by the African Leadership Organization, whose President is Dr. Ken Giami, and the National Bar Association (NBA) of the United States, led by Judge Carlos Moore.

In attendance were prominent Nigerian and African-American legal and business luminaries and an NBA delegation that is also part of a trade mission to Nigeria and Liberia.

One year after his death, fallen Liberian politician Brumskine remembered as...

Don’t Use The Media To Cultivate Gender Biases, Stereotyping

The man who saved thousands of people from HIV