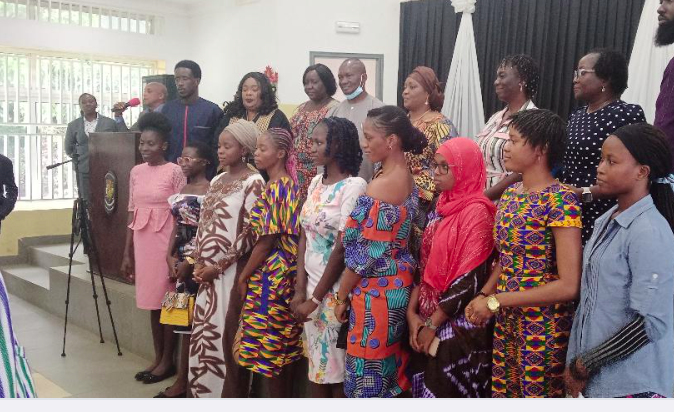 She revealed it recently when visited the campus to meet with Jewel Starfish Foundation’s scholarship beneficiaries while she was in Sierra Leone for the 10th African Conference on Sexual Health and Rights.

The Vice President of Liberia and her entourage, which included Senator Botoe Kanneh and Representative Moima Briggs-Mensah, visited Fourah Bay College, where her organization, the Jewel Starfish Foundation (JSF), is sponsoring several girls, and it was a momentous occasion for the college’s students, faculty, and staff.

In order to serve as a platform for possibilities for female empowerment and to change lives and make a difference, one girl at a time, VP Taylor launched the nonprofit organization known as the JSF in 2000. JSF was established in order to give the upcoming generation of female leaders the abilities and resources they require in order to make meaningful contributions to their communities and society.

JSF has supported more than 3000 girls in Liberia and recently expanded its program to include Sierra Leone, Ghana, and Malawi.

Chief Dr. Taylor expressed her excitement to visit the college during the welcoming ceremony hosted by the administration and the student union government of Fourah Bay College. She emphasized that the help provided by the JSF to girls is literally giving someone a new life.

The Vice President of Liberia claimed that the establishment of the JSF in Sierra Leone was made possible by Mr. Mabutu Kromah, whom she had met there when he was employed by the UN System.

In the same way that Sierra Leone’s Minister of Education is seeing the value of giving girls who appear to be underprivileged in many ways the opportunity to pursue an education, she characterized Kromah as a true he-for-she champion.

She claims that the JSF is helping some kids at Fourah Bay College and that they will grow their support for the school by using Kromah so that they can do a little bit more each year.

I couldn’t pass up the chance to see this historic college that I had heard so much about. Most of the time, I encounter folks from Fourah Bay College in West Africa when I see them at various levels of government. Despite the passage of 194 years, she remarked, “this is a proud institution with a heritage of training leaders, and we are grateful that this legacy continues across our sub-region.”

Chief Dr. Taylor expressed her pride at being a part of the institution of excellence that develops leaders for the area to the college’s students and staff.

She acknowledged that girls always face challenges because parents believe that boys have more opportunities than girls because they are the heads of households and typically have better job prospects; as a result, they spend more on their sons, but she emphasized that the world has unquestionably changed.

She explained to the students that women have taken on a crucial role in the expansion and development of the family, society, and country.

VP Taylor added that they need to investigate additional options for pairing up new college-bound girls with their male counterparts.

“We need a cooperation between men and women to speed up growth across our continent and transform it into what it ought to be.” I’m incredibly happy to have been a part of it, and I’ll keep doing what I can to help Fourah Bay College encourage female students by offering grants and scholarships. By God’s grace, I pray that we can continue to accomplish more each year,” she remarked.

In spite of the challenges they face, VP Taylor utilized the opportunity to inspire the female students at the college to be the best and brightest they can be.

All you need to do is keep dreaming and make the dream you wish to see come true. The sustainable goals are centered around a single woman because, she argues, “if a woman is empowered, everything is done and the next generation is secure. Therefore, each woman is a security for generations yet to come, and I want to encourage you to continue to do your best alongside your male colleague.”

She ends by expressing gratitude to the Fourah Bay College community and administration for their endeavor and saying, “I know this will not be my last visit; we will come as normal and we will continue to engage the young people here.”

Professor Lawrence Kamara, the Deputy Chancellor of Fourah Bay College, greeted VP Taylor and her delegates to the college and expressed delight to have them.

He asserts that they value JFS’s efforts and the VP Taylor’s attendance at the institution, highlighting the fact that it represents the plans and support they have for students. He also states that they look forward to continuing their cooperation.

Prof. Kamara continued by expressing his gratitude to JSF for all of their support of students, stating, “Recently, you made a really wonderful gesture by offering 10 grants to final-year students and 8 scholarships to female students to pay their tuition expenses.”

Although the government of Sierra Leone is also providing scholarships to thousands of students, I think this gesture is very impressive, and we want to express our formal gratitude to you for it because at times like these, parents are unable to pay school fees for their children and many of them are struggling.

He characterized Vice President Taylor as a kind and sincere person who has shown a great interest in supporting female students.

Christiana Lansana, a recipient of the JSF at Fourah Bay College, noted in the closing remarks that it is a fantastic chance for female students to get such a grant from the JSF, particularly since some of them are going through a lot of hardships.

Student Lansana claimed that after learning that JSF offered funds to female students, they made the decision to apply. Once they received the money, they attempted to make the best use of them in order to benefit their nation and the rest of the world.

Since the war, gender equality has become a serious issue that allows women to be left behind in many ways, especially when it comes to the educational system. She maintained that beneficiaries of the JSF are honored for the opportunity given to them by the JSF, emphasizing that it is quite a big blessing to them.

Student Lansana added that all of the people with voices are educated, and they have never seen a leader in the world who is uneducated. They therefore want to reassure the JSF that all the women who received funding fulfilled their obligations.

Liberia catches up with digital literacy

From a Toothless Bulldog to a Biting Commission:  A New Day for...

Government gives an ultimatum to RedLight Marketers to move to Omega