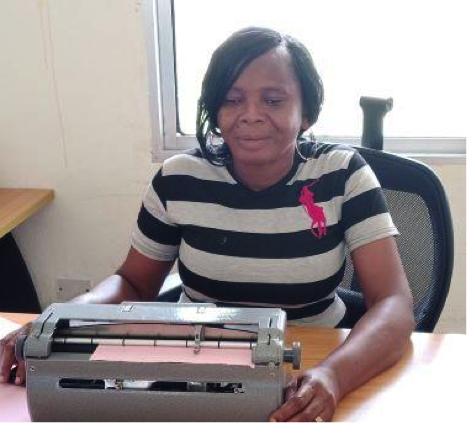 A female school administrator, the Vice Principal for the Liberia School for the Blind, Madam Eve D.K Nefor has made the call for hands-on training for visually impaired people in Liberia.

Her call comes amid the increase in the number of persons living with disabilities, especially visual impairment, wandering the streets in the country, seeking handouts from people of goodwill.

Madam Nefor is of the belief that the provision of hands-on training for the visually impaired would be better than providing them little cash along the streets.

In Liberia, there are few institutions that are helping people with disabilities, the School for the Blind being one of such entities.

The Liberia School for the Blind, located in Mango Town in the Virginia suburb of Monrovia, is free of charge, and is accommodating dozens of visually impaired students, from whom the institution provides education from the primary to junior high school levels.

Since its establishment, Liberia School for the Blind continues to make strides, as far as its objective of providing education for visually impaired kids is concerned.

The school is also providing computer skills training for its students, aimed at exposing its pupils to technology and get them prepared for outside world.

As part of its efforts to broaden the scope of the learning capacity of its students, the Liberia School for the Blind had earlier introduced the teaching of music to the kids, but due to the lack of support, this program was discontinued.

Madam Nefor said not everyone will be opportune to have an office job upon leaving high school, noting that if the students acquire skills of different kinds, it would provide some form of livelihood for them.

She said the lack of skills training for young people with disabilities who have completed high school is posing a major challenge, adding that due to this, efforts being exerted on visually impaired people go to waste.

She emphasized that it is the right for every child to go to school and that no one should be left behind, regardless of their condition(s).

Mrs. Nefor called on the Government of Liberia (GoL) to exert more efforts toward lending support to the Liberia School for the Blind, so that the objective of educating children in such category can be met, so as to ensure a brighter future for them to meaningfully contribute to the development of Liberia.

The School of the Blind Vice Principal pointed out that efforts currently being exerted by she and her co-workers’ would not yield much, without efforts and contributions of the GoL government and other partners who are desirous of seeing people with disabilities living dignified lives, which she said is in keeping with the Convention on the Rights of Persons with Disabilities.

“We hope that President George Manneh Weah can come and visit the school and do some site-seeing and just face the reality on the ground. The government needs to prioritize this school and our main challenge is inadequate funding and this is impeding our efforts because without adequate funding we cannot provide compensation to our staffers,” the young visually impaired female educator said.

‘Solution to Rice Crisis in Sight’: Minister Cooper …But denies knowledge of...