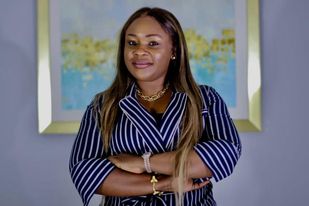 MONROVIA – The National Coordinator of the United Nations Security Council Resolution 1325 or UNSCR 1325 at the Ministry of Gender, Children and Social Protection and UNDP Gender-Focal Person and Gender Justice Specialist, Madam Vivian Neejay Innis, is WVN’s award winner of the paper’s “GENDER-FOCAL PERSONALITY OF THE YEAR” for 2020.

During the year in retrospect, Madam Innis showed exceptional commitment and dedication toward supporting efforts being made in the country by the United Nations Development Programs (UNDP), geared to supporting gender sensitive issues and strengthening the fight against SGBV in Liberia.

As part of Innis’ achievements for the year under review, she undertook meaningful initiatives and programs that attracted UNDP’s support towards the fight against SGBV in the country.

In her advocacy, Madam Innis, an advocate for social justice championed the cause for increased number of female participation in the country’s political governance process. She also advocated against violence against women and girls, and made her voice heard for women empowerment and women capacity building; these being very noticeable ventures undertaken by our honoree during the year in review.

During the year in retrospect, with partial support from UNICEF, she initiated several training programs for women, including training for over 400 female poll watchers during Liberia’s special senatorial elections. She also organized training for personnel of the Liberia Bureau for Corrections and Rehabilitation and the Ministry of Justice Human Rights Division.