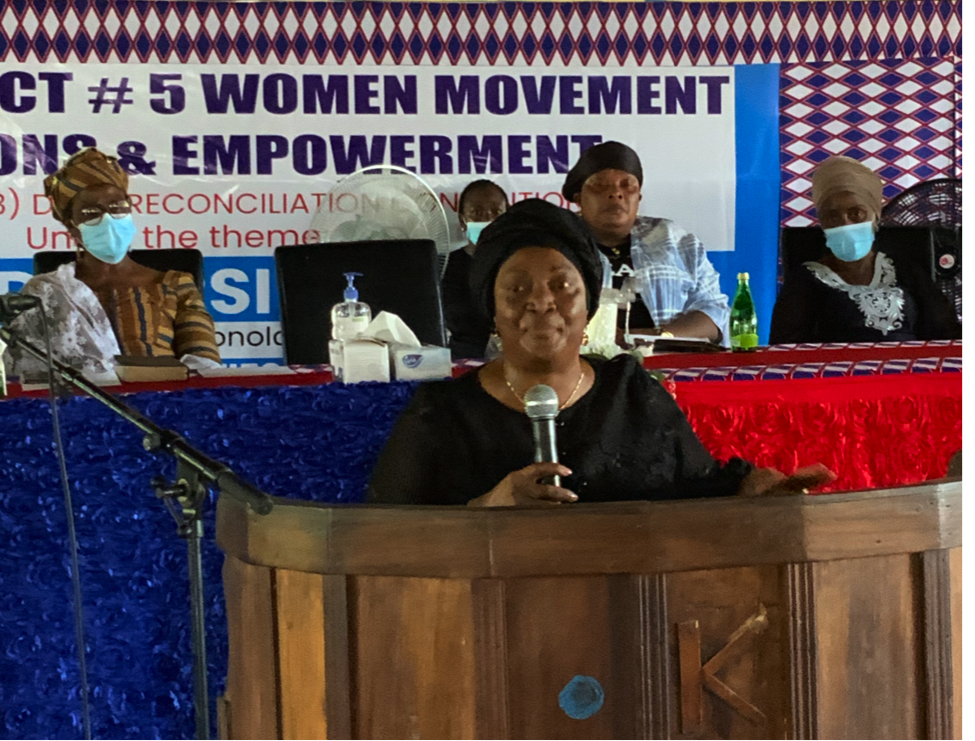 Vice President Chief Dr. Jewel Howard-Taylor has made the call for women in Liberia to support each other for a common goal, urging that Liberian women unite and set aside their differences.

VP Howard-Taylor made these assertions at the weekend, when she served as keynote speaker at a reconciliatory event, the Margibi County District#5 Women Reconciliation Convention, at Konola School Campus, in Margibi County. The event was organized by Madam Alice Baysah.

In her keynote address, VP Howard-Taylor told the gathering of women the need to hold together in love, as Liberian women working together to do the right things and to as well eschew tribalism.

She stated that women are special, stressing that therefore, they make a good leaders.

She wants Liberian women create a safe environment, recommending that they network in a large number and desist from tendencies that seek to pull one another down.

VP Howard-Taylor emphasized that the significance of an assignment to ensure what she called a new generation of women leaders are elected and put into offices of trust so as to guarantee a change in the country’s trajectory.

“We must value one another, if someone has a problem, go to them and help cover their shame instead of laughing at them, because if we help and cover one another, we provide protection to each other,” VP Howard-Taylor admonished the women.

She added: “We must find a common goal that which is women empowerment because everyone wants to achieve and live a better life and how can we do it? Together, because in unity there is strength.”

She’s of the belief that if there is women representation in Liberia’s 15 political subdivisions, much more would be achieved, but she was quick to point out that this would only be possible if the women of Liberia hold together and find what she calls a common goal.

The Liberian Vice President stressed the need for more women to be elected to serve the Legislature, indicating that this will make a big difference in the country’s governance process.

She frowned at women who lack consciousness to do what they ought to do to help themselves, emphasizing that if Liberian women elect their fellow women in public offices, they would be doing so as a great help to themselves because according to her, women leadership will think about scholarship, women empowerment, health care services and issues that affect women, as opposed to when a male is elected, he will be unable to address women-related issues as a woman would.

“If we were to get a woman leader, she will think on how we can mobilize to bring plenty women into leadership and that is the glory of being a female leader,” she said.

She cautioned Liberian women to always endeavor to replace a female with any female they seek to remove from positions of trust, warning that women don’t remove women from office and replace them with men.

She noted that voting out women and electing men is detrimental to females, stating that if females continue to elect males, they are harming themselves.

“If you elect a woman and she is not doing what she supposed to do put fire under her feet so she can move but do not say we are not putting her back but let me tell you if you put that man there you are harming yourself and you will end up going back to the same old problem. The woman is the most important person in the family and community, as such, as we talk about peace and reconciliation these are things that we already know,” she said.

She intoned that as Liberian women dialogue on unity in diversity, females in the country must value and respect one another as a people working together to achieve one goal.

She lamented the failure of certain counties to have female representations, singling counties in Liberia’s southeastern region, blaming the situation on the mentality of their male counterparts, who she said harbor the perception that it’s a men’s world. Be as it may, VP Howard-Taylor stated that women occupy 30% of the population in the southeast.

“As we talk about unity in diversity, how can we hold together when we are so different – but remember we are all precious in the God’s sight and he gave each and every one of us a gift. Let put our differences aside and unite, and it is important as we go toward 2023,” she stressed.

Vice President Howard-Taylor expressed the hope that Liberian women will form one united front to elect from each of the 15 counties, two females, who she said will represent the women of Liberia at the Legislature.

She disclosed that women make up 52% of the country’s population, indicating that if only females in Liberia can come together, they would elect more female lawmakers during Liberia’s General and Presidential Elections in 2023.

However, she stressed that if women are not into what she called the political space, nobody would talk for them.

In closing remarks, the organizer of the program Madam Alice Baysah said there was a need for reconciliation and awareness amongst women of District #5 in Margibi County.  According Madam Baysah, women were not only divided, but were as well marginalized politically in the District. She said the reconciliation program was intended to bring unity amongst the women to support one another. Madam Alice Baysah is amongst a few successful businesswomen in Liberia. She is passionate about women empowerment and political leadership. It has been speculated that citizens in District # 5 Margibi County are contemplating on petitioning Madam Baysah to contest for the District representative seat in 2023.