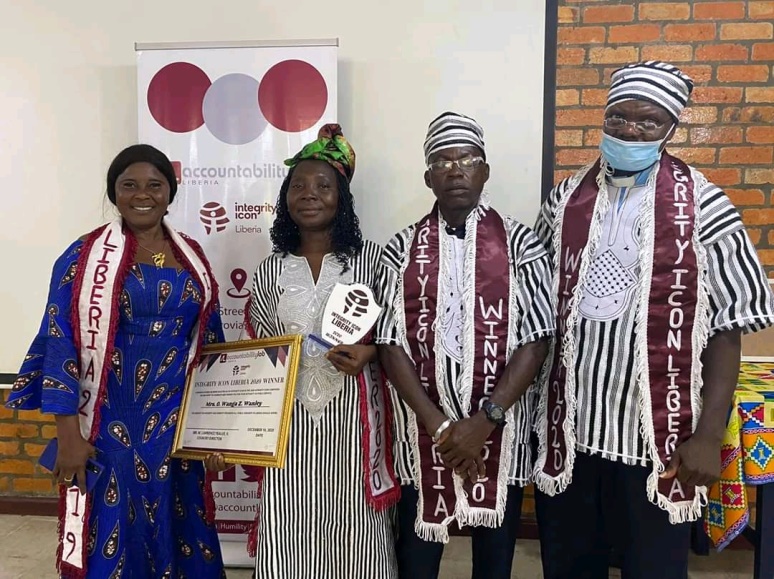 The 52-year-old nurse, O. Wanga Z. Wanley, and Officer in Charge of the Totoquelleh Clinic in Gbarpolu County, Liberia, has been recognised as the most inspiring female public servant, particularly in the Health sector of Liberia.

She has also won the 2020 Integrity Icon award, given by the Accountability Lab, Liberia.

Others nominated for the Integrity Icon Award 2020, were Liberia National Police Commander, Eric T. Joboe of Grand Kru County Detachment, Victor W. Nyanneh, teacher of the Grand Kru Public School and Sumoizuo Z. Harris, Project Director of Feeders Road at the Ministry of Public Work as the other nominees.

Speaking to the Integrity Icon winners, one gets the sense that all hope is not lost in the public service and that many men and women tirelessly dedicate themselves to the wellbeing of the people of Liberia.

2020 Integrity Icon of the year, O.Wanga Z. Wanley was delighted when she received the award which said took her by surprise.

Wanley thanked Accountability Lab for recognizing her as public servant.

“I want to say thank you for this award to come from Gbarpolu to receive this recognition, it makes me proud to continue working for my people,”Wanley said.

Wanley used the occasion to dispel the notion that all public service personnel are not passionate about their jobs.

“ I don’t know who nominated me, but I am grateful to receive this award which dedicated to all public servants who are working hard and are often not seen.

Also speaking briefly at the occasion, runner up and nominee, Titus K. Tikwa Jr. expressed his excitement over his nomination for the award, which he says is an indicator that there are indeed good stories to tell in public service.

For his part, Samuel G. Ford -2019 Integrity Icon Winner and Assistant Commissioner for Community Services at the Liberia National Police (LNP), who serves as a keynote speaker urged public service employees to emulate the good example of Integrity.

Ford emphasized that integrity means doing the right things in all circumstances.

The Integrity Icon Awards are given every year by the Accountability Lab Liberia to recognise the work and integrity of people making a difference in public service.

The nominees were gowned and crowned at the ceremony, held at the Accountability Lab office in Monrovia.

Meanwhile, the head of the Accountability Lab, Liberia, Lawrence Yealue, lauded the Winner and urged all the nominees to be a good role models in the society.