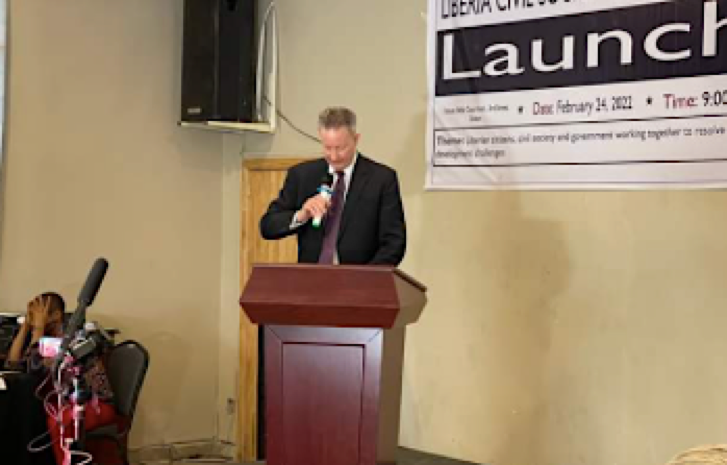 The US Ambassador to Liberia, at a program marking the launch of the national consultations in advance of the Stockholm +50 Global Meeting scheduled later this year in June 2022, acknowledged the risk climate change poses to Liberia.

Coastal erosion and floods are among the increased hazards Liberia faces, according to the American envoy, as a result of more intense and unpredictable rains.

“Indeed, ordinary Liberians are already experiencing these impacts during this exceptional dry season, which has severely limited the country’s hydro power generation, resulting in daily blackouts”, he noted.

Ambassador McCarthy, however, congratulated Liberia for what he calls the ambition of its revised Nationally Determined Contribution (NDC) to fight the adverse effects of climate change.

“Liberia’s impressive list of commitments will challenge all of us because the price is not cheap — nearly US $500 million — and Liberia alone will not be able to meet that cost. The international community will have to meet its own ambitious commitments and the United States has pledged to do the same”, he pointed out.

He commended Liberia for adding three new sectors to its revised Nationally Determined Contributions: Fisheries, the Coastal Zone, and Industry.

“These are sectors of vital importance to Liberia’s future, and devoted effort will be needed to adapt to and mitigate climate threats to these and other sectors”.

The US Ambassador recalled that at COP26 in Glasgow, Liberia committed to meeting the universal goal of limiting the increase in global temperatures to 1.5 degrees centigrade by 2030. He said his government has acknowledged that it will require accelerated action by all of us, promising that “We are especially grateful that Liberia was an early signatory of the Global Methane Pledge, and we look forward to working with Liberia on that and other initiatives”.

While applauding the Liberian government’s efforts to conserve the country’s forest, he asked the administration to give special attention to individuals whose livelihoods are dependent on the forest.

“At COP26 President Weah spoke of Liberia’s ambition to be a leader in Africa on climate financing. As President Weah pointed out, Liberia is home to more than 43 percent of the Equatorial Guinea rainforest, which are, in his words, “a major part of the global lungs which make it possible for the industrial world to breathe.” We urge Liberia’s efforts to protect these forests while also finding ways for the Liberians who depend on the forests for their livelihoods to sustain them and prosper”.

“These are big challenges, and they are not made any easier to accomplish in the face of a global pandemic. One of the three leadership dialogues in Stockholm will focus on achieving a sustainable and inclusive recovery from COVID-19”, stating that it will be important for all of us to continue to work with Liberia to prevent the spread of COVID-19 while also helping Liberia accelerate its economic growth.

The US Ambassador said one of the themes of Stockholm +50 is mobilizing innovative and bold action by collaborating with business. “We want to see free enterprise flourish in Liberia in a way that develops the vast talent of its people and sustains its rich environmental advantages — its beautiful landscapes, its exceptional biodiversity, and its abundant natural resources”, emphasizing that, “But that will not happen if Liberia does not have an inclusive, transparent, and corruption-free political system”, he said.

The US diplomat said he is pleased that Liberia has pledged for these upcoming consultations to be inclusive and meaningfully involve all stakeholders. “We look forward to seeing what new action-oriented ideas are developed to bring to Stockholm”, he concludes.

LMHRA, Stakeholders Brainstorm On Strategy To Build A WHO Pre-Qualified Quality...