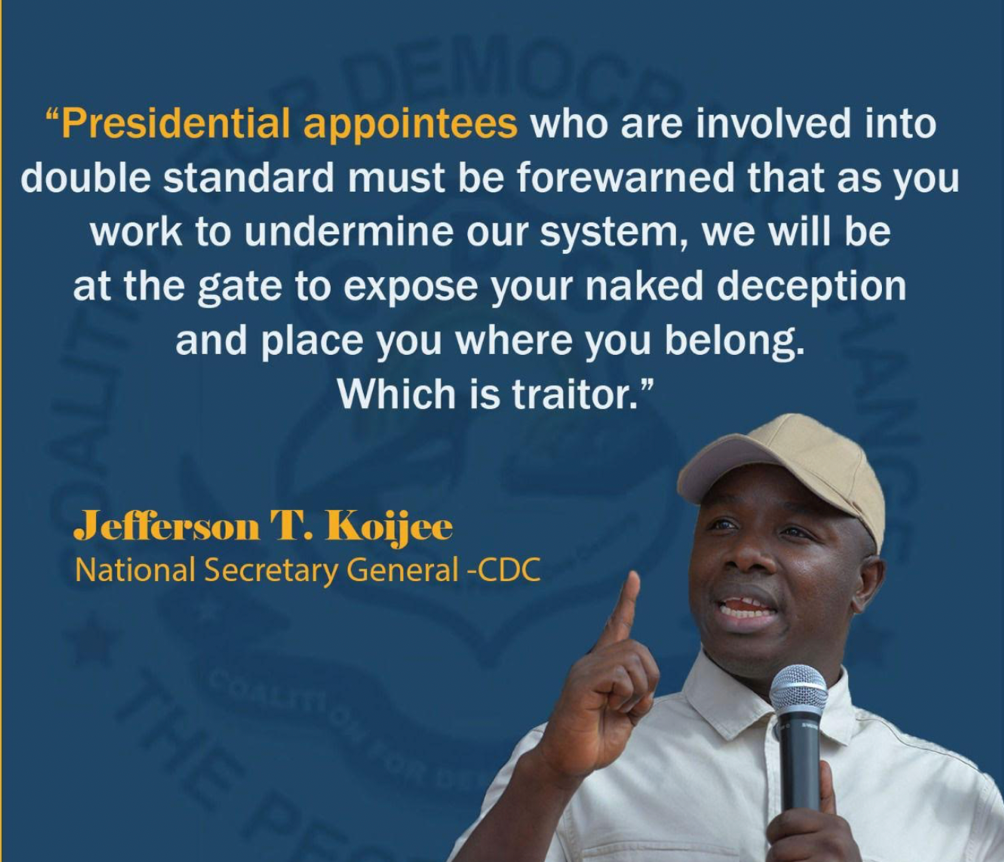 Congo Town, Liberia: December 12, 2022: Jefferson T. Koijee, the newly elected Secretary General of the Congress for Democratic Change (CDC) and Major of Monrovia, has issued a strong warning to presidential appointees of government to work in the best interests of the Liberian people and avoid acts that have the potential to undermine the government.

“Presidential appointees who are involved into double standard must be forewarned that as you work to undermine our system, we will be at the gate to expose your naked deception and place you where you belong,” CDC National Secretary General said.

Addressing a news conference over the weekend, the CDC Secretary General urged government officials, particularly presidential appointees, to make genuine efforts on their various functions, noting that the CDC was elected on a clear vision and that he believes it is the responsibility of all government officials to work in line with that vision in order to lift ordinary Liberians out of poverty.

“To our party leaders, we will not sit and allow you to collapse before we can intervene; we don’t need your permission to ensure that you are on the right path; to our friends, if the President gives you an opportunity, we don’t question it because it’s his constitutional right, but whether you are a CDC member or not, this is what the people voted us for; we went to them with a clear vision, and with that vision we were entrusted with state power, so we are urging all appointees to concur with the vision of the CDC and avoid undermining the process,

He considers the controversies surrounding the dissemination of information by government entities to be unacceptable, noting that it is unhealthy for a government like theirs, particularly when the public is interested in knowing the truth.

However, he went on to say that they have concluded that, going forward, all Ministries and agencies will be closely monitored and watched by the Coalition for Democratic Change (CDC), in order to ensure that government officials represent the best interests of the Liberian people.

Jefferson T. Koijee maintained that said decision by the CDC is in no way an attempt to call for the appointment of only members of the CDC, but rather a step in guarding the governance process of the state, especially under the watch of the Coalition for Democratic Change (CDC).

“We are not saying that only members of the CDC should be appointed; we are saying that you should work in the interest of the people as they have entrusted you to do,” he said.

Furthermore, he believes there is no shortcut to the presidency, and as such, he has encouraged opposition politicians to avoid the dark and violent side of politics and instead allow the people to engage them at the ballot box and reward them for their efforts over the years.

“Come to us; let us meet at the barrack gate; let’s meet and debate the issue of the Liberian people; and don’t just come by echoing words; come along with your history; let your history accompany you,” he said.

He believes the idea to stage a protest now is not laudable, stressing that it has absolutely no positive impact on the ordinary people and will in no way ensure an abrupt end to their disenchantment.

“If Koijee is not doing well with his job, there’s only one polite place or way to go, and that’s to the elections, and the decision of the Liberian people will be respected just as we did when we were defeated in Montserrado and other areas,”  he added.

He sees the opposition community as a theater of former government officials who are dangling their way back to government in order to seek their personal aggrandizement. He also thinks they are more eager for the imposition of the US sanctions on officials of the Weah administration, as they see it as a stepping stone to ascend to state power.

At the same time, he admonished them to live up to their history and allow the people to make a genuine decision in 2023 if they are uncomfortable with the governance process of the Coalition for Democratic Change.

Mayor Koijee further clarified that the CDC was formed with no intention to divide the country, as it was built on the principle of peace and unity.

He lauded the international community, especially the US Embassy, for its crucial role in the governance process in Liberia.