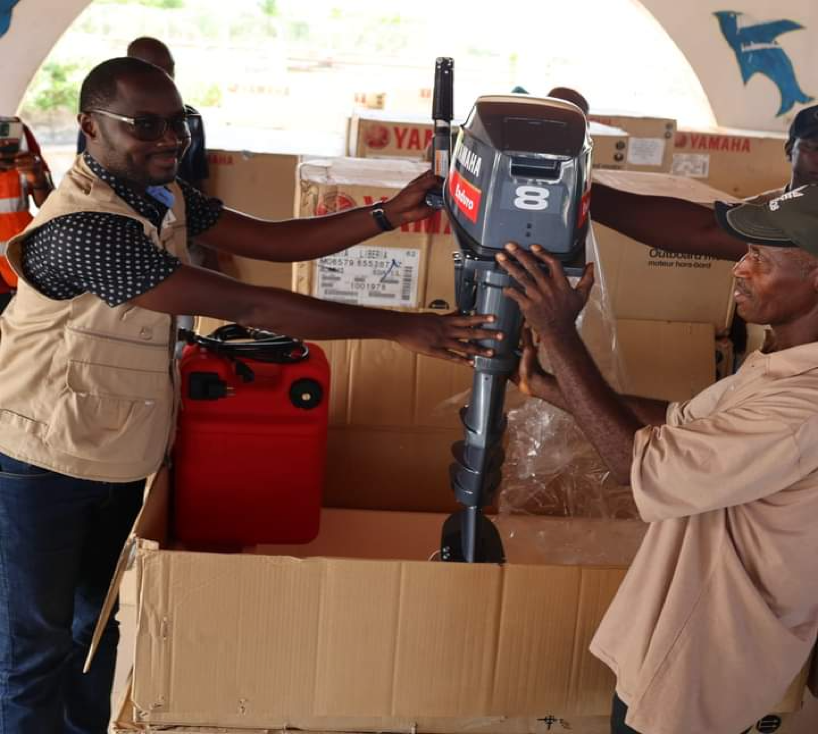 Over the weekend, Liberian fisherman got outboard YAMAHA engines from the National Fisheries and Aquaculture Authority (NaFAA) in Grand Cape Mount County, enhancing their potential to compete with their colleagues from other countries.

The project is a continuation of engines given by NaFAA to fisherman in nine coastal counties, primarily Liberian fishermen who traditionally use peddle canoes.

President George Manneh Weah officially launched the Yamaha engines in the port city of Buchanan, Grand Bassa County, on October 23, 2021, at a packed ceremony that included senior government officials and Liberia’s development partners, including the World Bank, WHO, and European Union.

According to a statement from NaFAA, the government and citizens of Japan donated 420 engines to the Liberian government through NaFAA in 2021.

The contribution is in fulfillment of President Weah’s commitment to the fishermen during the 2017 elections, according to NaFAA’s Deputy Director General for Administration, Mr. Augustine N. Manoballah, who spoke at the distribution in Robertsport over the weekend. According to Deputy Director General Manoballah, the president’s gesture was intended to encourage local fishermen to compete with their international competitors.

“President Weah has given this to you as a gift. He understands the difficulty of paddling deep into the sea to catch fish using paddle canoes. He believes that this is another approach to increase your ability”, Manoballah said.

Mr. Manoballah informed a meeting of fishermen, fish mongers, and processors at Robertsport that because the machines could not meet everyone’s demand, fishing cooperatives were formed in coastal villages with the support of the Cooperative Development Agency (CDA) to benefit from the engines. He urged each cooperative’s leadership to put the gift to good use for all of its members.

This is not a one-person operation. This cooperative’s members should all benefit. We’ll keep an eye on the functioning of these outboard units from time to time.”

The government is working with the Japanese government and other partners to bring in extra shipments, according to the NaFAA deputy director general.

“This is only the start. To accomplish more of this, we’re collaborating with others and the Japanese government. We’re serious about it. “The president is well aware of your requirements.”

In the meantime, the fishing cooperatives received multifilament or biodegradable (thread) nets in bundles. This is part of a larger effort to eliminate substandard or non-biodegradable (plastic) nets. The Fisheries Authority officially inaugurated the “Net Exchange Program” – “rubber nets for thread nets” – in the township of West Point in May 2021. It’s part of a global campaign to combat IUU (illegal, unreported, and unregulated) fishing.

Handling the nets to the Liberian fishermen, Mr. Manoballah said, “By standard, the plastic nets are not good for fishing. To convince the people that the nets are bad is to bring the good ones and take away the bad ones. The thread nets are in exchange for the plastic nets. The reason we’re doing this is to safeguard ourselves. In the next 10 to 15 years, all the fish we have will be gone if we don’t fish responsibly to manage our marine resources.

While receiving the gifts, the chairman of the Sowee fishing cooperative, James Samola, said: “Today marks the happiest day for us. We have been hearing that the machines and nets were coming. Today, they are here. We will work with them to improve what we do. We tell the president, “Thank you for thinking about us”.

Also speaking was the chair of the Fomba fishing cooperative, Mr. Sando Kollie. Kollie thanked the government and the collaborative management association for the intervention. “What the government is doing for us is the beginning of our country’s development. “President Weah, we will not forget about you because you were the first to give us outboard machines and net”.

For his part, the chairman of the Bomboja fishing cooperative extended thanks and appreciation to the president. “Tell the president we have received what he promised us”.

Representing fish mongers and processors at the ceremony was Madam Massa Kiazolu. Madam Kiazolu said: “we want to take this time to thank our president and NaFAA boss Madam Emma Glassco for the wonderful work. The fish mongers and processors have been struggling for long. The interventions here will enhance the capacity of our fishermen and promote sustainable fisheries”. In the coming weeks, the exercise will be held in the southeast.

“This is a Political Win for Women”