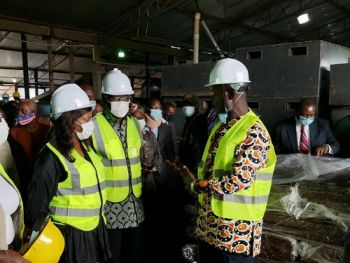 President George Manneh Weah has not had ample time of rest, neither has he been jittering to cruise deeper in the remotest parts of the country’s hinterland, exchanging pleasantries and good tidings with rural folks and cascading critical development projects, according to the Executive Mansion.

President Weah has made stop-and-greet drives through countless towns, villages and cities, often detouring from major highways into woods to have a firsthand look at the situations citizens face and hear from them on their social and economic aspirations and expectations.

In Bong, the Liberian Leader veered his convoy into several towns and villages, including Salala, Sanoyea, Kokoya, and Gbenequelleh. On his way to these bigger towns, he made brief stoppages in few villages to interact with the elders, women, youth and disadvantaged people. This is in addition to town hall meetings and appearances on community radio stations to speak to a wider spectrum of the locals.

Nimba County’s emotional welcome was particularly massive, as the Liberian Leader touched down in Ganta, Sanniquellie, Karnplay, Yekepa, Bahn, Cocopa, Tappita, even including villages and hamlets between towns.

The epic move of all is the infiltration of the woods into Gbi-Dorru (102km from Tappita) on the southern plank of Nimba County—two towns that are considered one of if not the most forgotten areas in Liberia.

The President and entourage drove over four hours in his bid to reach citizens in these farthest hamlets and casted his own eyes to living conditions of Liberians in these faraway parts. Yes, driving over 33 unprotected and unguided bridges made of logs and ordinary planks.

The maternal grandparents of the President hail from the Gbi-Dorru region of Nimba County, where the locals some time back bequeathed over 1,500 across of farmland to him, farmland being progressively cultivated for rice, plantain and cocoa.

Dr. Weah and delegation spent the entire Thursday, February 19 treading the winding path to and from Gbp-Dorru, arriving back in Tappita at odd hours.

Like in most parts of the countryside visited in Bong and Nimba, citizens would queue in near-endless lines to give him heroic welcome as the people of Jerusalem in biblical days did for Jesus when he visited Bethlehem.

Though the President did not ride on the back of a cock as was the case of Jesus, he encountered mammoth turnout of villagers along the route.

President Weah on many occasions ignored tight schedules and other concerns and would make brief stops, disembarked his vehicle to greet and interact with citizens as he moved along.

“This is a life time memory for me and the young kids of this town to have the opportunity of seeing a President; this did not happen in Tubman, Tolbert, Doe and Taylor eras,” said an enthusiastic resident of the Dorgbor Town.

Many placards and chants chorused, “Thank you for the development and welcome, Mr. President”.

True to promise made to the people of Nimba that he would relocate the G.W. Hospital in Sanniquellie, the Liberian Head of State broke grounds on Monday of the week in Sehkimpa few minutes’ drive from Sanniquellie, after he had broken grounds for a new market structure near Sanniquellie.

“It is good to be here and I am happy that we are breaking grounds for the new hospital for the people of this part of Nimba,” the Liberian Leader said as he shoveled the sand and intentionally brandished with the shovel in excitement.

At a town hall meeting in Karnplay, President Weah thanked the citizens for voting him into power, and assured them of his commitment to meeting their needs. He stressed that the government is working to meet their development needs, but urged them to exercise patience.

In the mining town of Yekepa, a swarm of students from different schools across the town queued to give him a rousing welcome to the President after which he met with managers of Arcellor Mittal Mining Company.

The President similarly met dozens of students studying Mechanics, Electrical and Mining Engineering at Arcellor Mittal. He encouraged them to take their studies serious because they are the future leaders of the country.

In a related development, President Weah on Wednesday, 17 February 2021was greeted at the facilities of the Liberia Cocoa Corporation, formerly Cocopa and cut the ribbon to the newly built rubber processing plant.

In brief remarks, the Liberian Chief Executive reechoed: “Liberians will not be spectators in their economy,” in appreciation of the company’s achievement. “It is welcoming to see Liberians taking advantage of the call to invest in the economy. The cocoa sector is booming and we must encourage Liberians to grow cocoa and other cash crops,” the President emphasized.

He thanked the management and staff of Cocopa for the sacrifices they are making to contribute to the Liberian economy, pledging that the government will do all it can to support the sector.

In Bahn, the President dedicated 93 housing units built for Ivorian refugees by the UNHCR in collaboration with the Liberian government through the Liberia Refugees Repatriation Resettlement Commission (LRRRC).

He warned refugees against engaging into unlawful acts, and urged to be law-abiding and peaceful. The President said it was left with the refugees to decide if they wanted to return home or reside in Liberia.

“If you want to be citizens, there are laws and procedures that must be followed,” the President reminded them.

Also at a town hall meeting with citizens of Saclepea in Nimba County, the Liberian Leader called on citizens to seek peace and development over division and conflict.

He said his government would leave no stone untouched in meeting the needs of the people of Liberia in line with its development agenda.

Using himself as example, President Weah urged youth of the Saclepea to engage into meaningful ventures that would better their lives, warming them not to get involved into acts unacceptable to society.

President Weah is sending out message of peace, love and unity, thanking Liberians for maintaining and sustaining the peace since the departure of UNMIL.

He called on Liberians to keep the country peaceful regardless of tough situations because with peace, development is attainable.

As part of efforts to reach to every nook and corner of the country, President Weah on Thursday, February 18, 2021 made history to become the first president to visit the remote town of Gbi-Dorru closed to River Cess County.

With those interactions in Bong and Nimba Counties, the President and caravan move deeper into the Southeastern counties of Grand Gedeh, River Gee, Maryland and him home, Grand Kru beginning Friday, February 19, 2021.

Cummings’ fate hangs in the balance