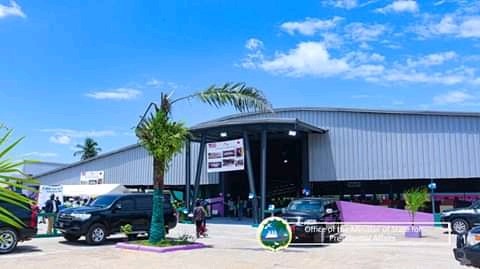 President George Weah has extolled the Government and People of Japan for providing a major portion of the funding for the construction of the 14 Gorbachop International Markets, through the Japanese Counterparts Value Fund.

The market project is value over 3.8 million United States dollars.

According to President Weah, the fund was intended to underwrite the construction of the market project that is vital to the growth and development of the country.

He also appreciated  the taxpayers of  Liberia, indicating  that it was  their taxes  that afforded  the Liberian Government  to meet  its contribution  to complementing the support  of  the Government and people of Japan.

The Liberian leader further indicated that the market is the first largest to be   built in Liberia that is equipped with modern facilities for use by marketers and for their comfort and their safety.

He further urged those who are responsible to manage the 14 Gorbachop International Market to keep it clean and maintained by ensuring that the image of the market facility properly represents the marketers and what they stand for.

President Weah told the gathering that the Government is committed to the continuous enchantment of the marketing sector of the country by constructing more markets across the country.

He called on the marketers to unite and work collectively for the success of the transformation of the market sector.

Also speaking at the occasion was the Executive Director of the Liberia Agency for Community Empowerment, Quiwu Yeke, who said  the  14 Gorbachop International Market project  was completed in line with  the stipulated time of 11 months.

Mr. Yeke said the market is to benefit over 1,200 marketers with equipped bathrooms, running water, generator, and two offices, among  others.

He further challenged the marketers to protect the facility by keeping it clean.

The LACE Boss also used the event to command the Government and People of Japan including the contractors for their commitment   in ensuring that the project was completed on time.

Also speaking at the dedicatory ceremony, a Representative of the Paynesville City Corporation, Hawa Sheriff, praised President George Weah for vision in the transformation of the market sector and other developmental programs across the country.

Madam Sheriff said as the PCC takes over the management of the newly constructed market,   the corporation is requesting   the approval of President George Weah so that the PCC Authority can construct children playground.