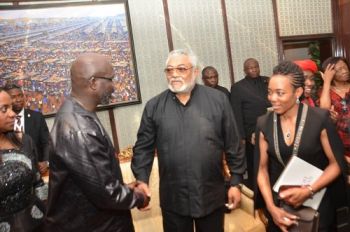 The Liberian leader has said the deceased former President will be remembered for the crucial role he played in the restoration of peace to Liberia. Ghanaian troops were part of a multi-national peacekeeping force from West African countries that helped maintained law and order during the height of the Liberian civil war.

President Rawlings, who led Ghana from 1981 -2001, personally championed the peace process in Liberia, including the organization and hosting of the many different peace accords, and his several mediation missions to Monrovia to meet with the country’s feuding warlords.

President Weah extends his condolences to the government and people of Ghana, and the bereaved family, for what he described as an irreplaceable loss, stating that the deceased Rawlings left a huge legacy not just with his compatriots, but Liberians as well.

The Liberian president said “I will always have fond memories of my interactions with him particularly when we met at my inauguration and during the funeral services of the late Dr. Kofi Annan in Accra,” saying, “he always gave me wise counsel.”