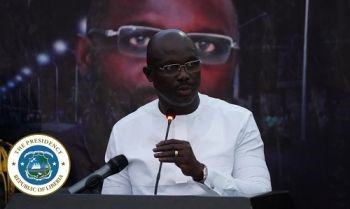 … To Light Up Monrovia, Other Places

“Let there be light,” and a stretch of the first major boulevard in Paynesville, Montserrado County, Liberia, immediately illuminated the impenetrably dark surroundings on orders by President George Manneh Weah.

The Liberian Leader, speaking October 1, 2020 at a ceremony organized by his friends and supporters in commemoration of his 54th birthday, mimicked the Genesis 1 authority of the Almighty God when He created Light and Day. The only difference was that the President’s orders followed a prior plan and promise to the people of Liberia that he would drive out darkness from communities during his tenure as President.

The first part of the President’s promise benefits communities, specifically between ELWA Junction and Samuel Doe Boulevard in Paynesville, and additional works toward Central Monrovia and other parts of the city are in accelerating pace to achieve results before this year’s Christmas festivities.

“Today is a clear example of what is in stock for Liberia,” the Chief Executive said amid jubilation greeting the spontaneous burst of electricity in a corridor of Paynesville.  “Much more is to come as we provide street lights, working with the LEC to light up 80 more communities soon.”

The President said further: “I have already authorized the payment of Two Million United States Dollars to LEC to cover the city of Monrovia with electricity, and I am happy to showcase this promise into practical reality on my birthday.”

“I promise to do my best, as your president. Only my best is required,” the President said, thanking the people of Liberia for reposing their confidence and trust in him to serve them.

He called on Liberians to remain peaceful and patient as his Government endeavors to meet their heartfelt needs.

“Resist temptations to destabilize the peace and tranquility of the country,” the President stressed. “Whether you are a journalist, opposition politician, civil servant or civil society actor, remember that it is in the best interest of the country and people if everyone realizes their national obligation, works with the national government to make the country what is ought to be.”

The President used the occasion to frown on the tendency of health workers to abandon their posts to protest in the streets at the risk of sick people.

He said while some of the demands of the striking health workers might be legitimate, it was unprofessional and unethical to turn their back on sick people when they had the opportunity and the available political will in government to negotiate their claims peacefully.

In other ceremonies commemorating the 54th birth anniversary of the President, a group of Liberian children who congregated at a Thanksgiving Service at the Forky Klon Jlaleh Family Fellowship Church offered prayers for the President, invoking God’s blessings and favor of long life and good health upon him.

The children also offered prayers for the recuperation of Vice President, Jewel Howard Taylor and Public Works Minister, Mobutu Vlah Nyepan who are currently undergoing treatment out of Liberia.