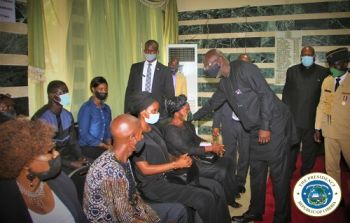 President Weah, who was accompanied by members of the Cabinet at the signing ceremony held at the Ministry of Foreign Affairs, described the late Quiah as family man, a patriot, and one of the champions of multi-party democracy in Liberia.

Consoling the bereaved families, the Liberian Leader urged and admonished them to be strong and count on God Almighty for comfort during their difficult times.

The late Oscar Jaryee Quiah served Liberia in many capacities, including Minister of Post and Telecommunications, Minister of Internal Affairs, Director General of the Civil Service Agency, National Housing Authority and Chairperson for Boards of Directors for other Government institutions. He also served as a member and Vice Chairman of the Liberia National Transitional Government (LNTG).

The late Quiah died on January 30, 2021 and is expected to be buried on Thursday, March 18, 2021 following funeral rites at the Sinkor Assembly of God Mission Church.

He leaves to mourn his wife, children, host of other relatives and friends.