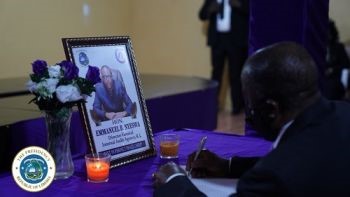 -As He Signs Book Of Condolence for Fallen IAA Boss

President Weah emphasized that all Liberians be conscious about their security by helping national security institutions and other law enforcers to ensure that criminals and other evil-minded characters do not have their way at will.

“We don’t know what happened and that is why we are checking,” the Liberian president intoned, adding that it is the responsibility of every citizen to be concerned and conscious about what’s happening around them so as to deter criminal acts against them.”

The Liberian leader described the late Nyeswa’s passing as a sad moment for the Government and the country.

Speaking to reporters following the signing of the Book of Condolence, President Weah said the deceased IAA boss was a true patriot who devoted his time and energy to national duty for the good of the country and would be missed for his professionalism and commitment.

Asked how he felt losing four public servants in sequence, President Weah asserted that the passing of Nyeswa and others was of paramount concern to all Liberians, including him.