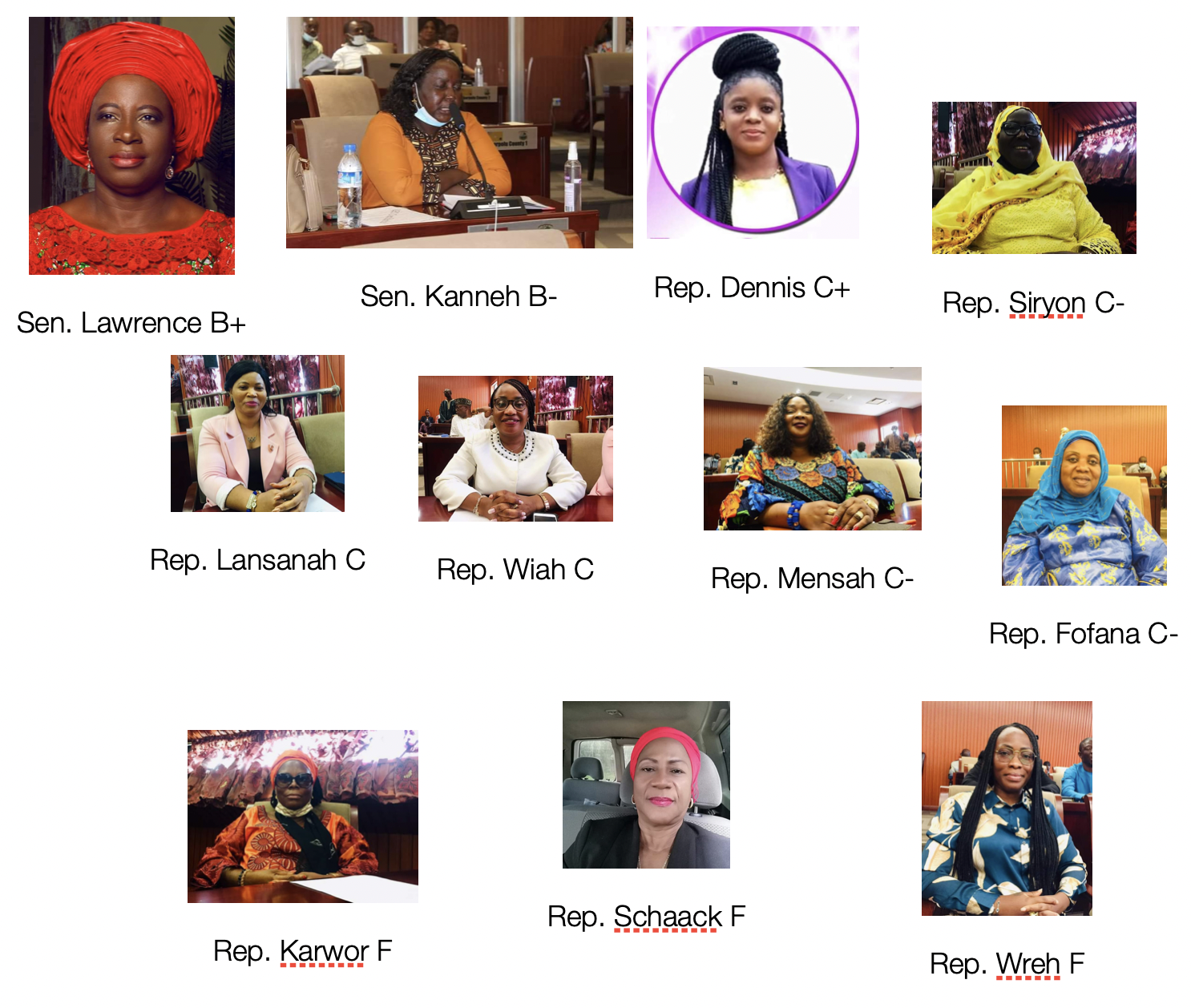 Women’s participation in politics has lost steam over time. This is especially true now that there are fewer women in the legislature after the presidential and legislative elections of 2017. The big drop in the number of women in the National Legislature is partly because they don’t do their jobs well and people don’t know what’s going on.

In this regard, Womenvoices Newspaper’s reporters assigned to the National Legislature believe it is important to critique the performances of female lawmakers in an effort to improve performance and promote women’s political endeavors.

With a scorecard that goes from A-F, this critique looks at the three most important jobs of all lawmakers: representing their constituents, making laws, and keeping an eye on the executive branch of government.

With just two female senators (Senators Nyonblee Karnga Lawrence of Grand Bassa County and Botoe Kanneh of Gbarpolu County) among a male-dominated senate, Grand Bassa County Senator Nyonblee Karnga Lawrence, who’s the Chair of the Women Legislative Caucus, has proven good in the various spectrums of her duty through constant advocacy at the Senate for her county and at the national level.

Prior to the passage of the drug law, she was one of the most ardent advocates for its passage. She made a compelling argument that the offense should be a non-bailable offense for importers, distributors, custodians, and local producers, but that end users should be able to post bail for the offense. On the Senate floor, where important topics, including those impacting women, are being discussed, her presence is definitely felt.

Additionally, Senator Nyonblee Karnga Lawrence, who’s also the Chair on Rules, Orders, and Administration, runs the Nyonblee Cares Foundation, which has provided school programs since 2016 and has persistently been engaged in advocacy against sexual and gender-based violence, and she has been very vocal on several national issues. She frequently visits and interacts with her constituents.

Senator Nyonblee Karnga Lawrence, in her role as Chairperson of the Women Legislative Caucus of Liberia, has pushed for a number of initiatives for women, such as the recent two-day workshop for female lawmakers and women who want to run for office in Liberia. She has also put up a serious challenge at the level of her political party as standard

Judging from the background of her performance provided above, we grade her a “B+.”

Senator Botoe Kanneh, the current senator of Gbarpolu County, whose campaign story raised a red flag in the country, is among those females who are making the most of their positions through advocacy for violence against women in and outside of her county.

As Chair of the Senate Committee on Gender, Senator Botoe Kanneh showed her oversight responsibility during this time by condemning and calling for the protection of women and girls from all forms of violence, both in her county and at the national level.

In September of this year, there were a lot more reports of rape in Gbarpolu County, so Senator Botoe Kanneh called for more awareness about rape and other forms of domestic violence.

Though she has made efforts through personal intervention in the lives of some residents of Gbarpolu County, Senator Kanneh was one of the few lawmakers who did not vote for the passage of the drug law as a non-billable offense.

She did, however, justify abstinence prior to the passage of the Drug Law, stating that rehabilitation for end users is critical and must have been included in the passed Law’s non-bailable portion, and she believes it was important enough to be set non-bailable for end users.

Though she has not proffered any bill, she frequently visits and interacts with her people and has a high approval rating among them.

Judging from the background of her performance provided above, we grade her a “B-.”

Nine (9) strong women are sitting at the Honorable House of Representatives. They represent different electoral districts in the counties of Montserrado, Bong, Lofa, Bomi, River Cess, Margibi, and Grand Bassa.

As it has been observed,  most of these women’s works are concentrated representations because they don’t speak up about the issues or try to get bills passed.

The lawmaker from Montserrado County was worried about how much the school’s owner, Senator Princess Y. Johnson, was involved in the Liberian civil war and how he related to the rest of the world. She remains one of the few critical female voices in the House of Representatives.

At the level of her district, she has also been consistent with community projects like fixing up roads and other small facilities, giving women in her district more power and training them in skills, and paying for youths to get vocational and technical training.

Judging from the background of her performance provided above, we grade her a “C+.”

Representative Julie Fatormah Wiah, who works for County District 2 (Vahun), is one of the few people in Lofa County who is doing her job as a lawmaker.

Representative Julie Fatormah Wiah brought an “Act to Establish the Vahun Polytechnic, Vahun District in Lofa County, Republic of Liberia” to the House of Representatives’ regular session on September 6, 2022. She did this because she thinks the polytechnic will help people in the district and county learn technical skills.

However, the House of Representatives plenary voted to send the bill to the committees on judiciary, education, and ways, means, and finances to further advise the plenary on its passage. 25 persons voted in favor, none against, and one abstained.

She has also been on course with her representation and oversight responsibilities, though there is still a lot more to do in her district and the county at large because her district is one of the remotest areas in Liberia and lacks almost all basic social services in electricity, safe drinking water, roads, security personnel, etc.

Judging from the background of her performance provided above, we grade her a “C.”

Bomi County, District #1 (Senjeh District), Representative Finda Alice Gborie Lansanah, who’s continuing Senator Edwin Melvin Snowe’s legacy, has done a little too much within her district in her capacity as a lawmaker.

In April of this year, she led a campaign to protect and improve the welfare of workers at the Bomi County-based Mano Palm Oil Plantation. Her actions led to the renovation of the workers’ building and the company’s school laboratory, a faster rebuilding of the housing units in Kennedy Camp, the payment of salaries to workers, the promotion of staff to different positions, and scholarships for about five students in the county.

Even though Representative Finda Lansanah works well with the people in her district, she has not yet put forward a bill that addresses issues that are important to the people of Senjeh.

Judging from the background of her performance provided above, we grade her a “C.”

Also in Bomi County, District 3 Representative Haja F. Siryon is among those lawmakers who lost their presence on the political scene this year.

Though the female lawmaker has been involved with her constituents and dealing with problems in her district, her presence and involvement in national discourse as an old lawmaker have been marginal and unnoticed.

Representative Moima Briggs-Mensah of Bong County District 6, whose work has shown her weight in her district and at the House of Representatives, is seen as making some difference at the level of oversight and representation.

It’s clear that she has started big projects in her district and helped her people a lot, but she hasn’t done much of her job as a lawmaker, especially when it comes to proposing bills to deal with issues that affect the people of Bong District No. 6 and the country as a whole.

Since February of this year, when she won on a white ballot as Chairperson of the Bong Legislative Cause, which was a sign of agreement, her coordination with her colleagues and role as Chairperson have been felt in the county, especially between investment companies and county residents.

Representative Briggs-Mensah is also the co-chair on the committee on post and telecommunications of the House of Representatives, but unfortunately, we literally don’t see tangibles from the committee’s angle.

Bong County, and Salala District in particular, is one of the many places where female genital mutilation (FGM) is proudly done and accepted. However, Representative Moima Briggs-Mensah has not yet brought a single bill to the House of Representatives that would ban FGM.

For Lofa County District #4 Representative Hadja Mariama B. Fofana, she has spent more time on her political campaign than on her constitutional duties this year.

After she tried to run for the Lofa County senatorial by-election in 2022, Representative Hadja Mariama Fofana spent more time working with the public until the end of the election, which she lost.

However,  she put forward a bill to make Independence Day (July 26) celebrations less centralized, but hasn’t been able to do much in the House of Representatives.

Judging from the background of their performances provided above, we grade them “Fs.”

Since 1943, there have been a total of 52 women in the Liberian legislature, including those who served during the interim.

Similarly, the Charles G. Taylor administration, which lasted from 1997 to 2003, produced 7 female legislators, while the interim period produced 2 and the permanent period produced none.

Currently, there are 11 female lawmakers within the George Weah administration, while more efforts are being made by women’s groups, CSOs, NGOs, INGOs, and women across Liberia to ensure a speedy increase.

The average percentage of women in national parliaments or legislatures is 26% in sub-Saharan Africa and 17.4% in West Africa. In Liberia, women make up less than 11% of the 103 seats in the Legislature.

Other counties like Nimba, Grand Gedeh, Maryland, Sinoe, Rivergee, and Cape Mount have not had female participation in recent years.

As things stand, it’s up to the current female lawmakers to do well so they can keep their seats. This is especially important since the men around them are fully capable in every way to unseat them.