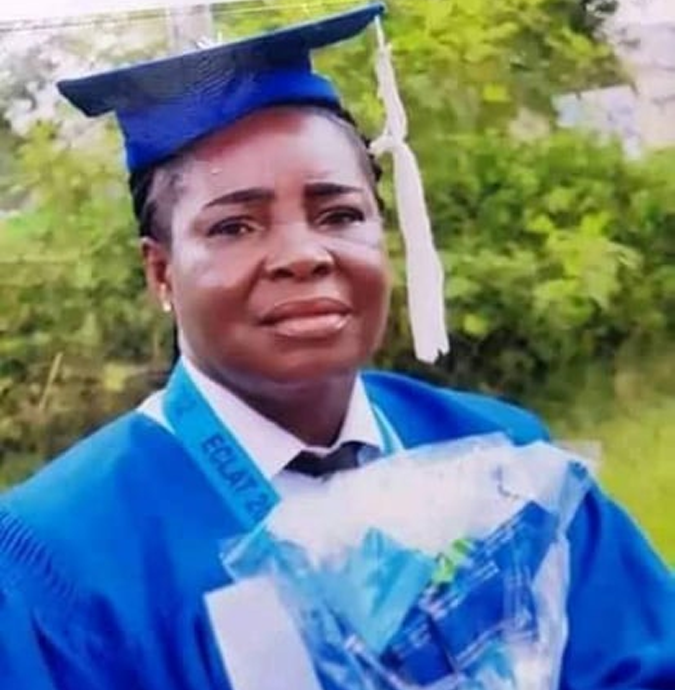 -Gets scholarship to pursue higher education

The graduation hall of the Effort Baptist Church in Paynesville City outside Monrovia was recently the scene of excitement and joy when the name of a 58-year-old woman, a graduate of the Nathan E. Gibson Memorial Academy (NEGMA) was pronounced by the school’s administration.

Graduate Faith R. Reeves was among 310 students of the NEGMA that were qualified and certificated as graduates during the school’s 35th graduation and honoring program.

Making a brief remark upon receiving her high school diploma from the Principal of the institution, Mr. Samuel A. Fogara Sr., Faith disclosed that she was overwhelmed that after several years of study she would finally graduate from high school.

The 58-year-old High School graduate expressed the hope that with God on her side she will persevere until she also obtains her college degree, adding that there is no limit for anyone to acquire sound education once such person is focused and determined.

She thanked the teachers and the school’s administration for what she termed the wonderful work they are doing in imparting knowledge into students who are prepared to secure a better future in life.

Also speaking in joyous mood, Principal Samuel A. Fogara Sr., congratulated parents and guardians who supported their children education through their merger resources, some from the sale of bitter balls.

He encouraged the parents and guardians to continue to standing by their children and wards because, according to him, they are the ones that will lead the family after they (parents/wards) shall have retired  or be in their old age, urging the graduates to move forward in pursuit of higher education.

Mr. Wehye who is a veteran Liberian educator announced the provision of two scholarships to two of the graduates who anticipates becoming teachers in the country.

The two scholarships, the LICOSESS boss notes, is his institution’s way of encouraging Liberian students desirous of becoming trained, professional, and career teachers especially at the time the country is in dire need of more trained and qualified teachers.

He assures that LICOSESS would not rest until the fifteen political subdivision of the country is lighted with professional and high profile classroom teachers for service to the nation.

The LICOSESS Teachers Training Institute has over the years trained and graduated hundreds of teachers most of whom are providing instructional services to the students’ population across the country.

During the graduation ceremony, several hardworking faculties and deserving students of the institution were honored.