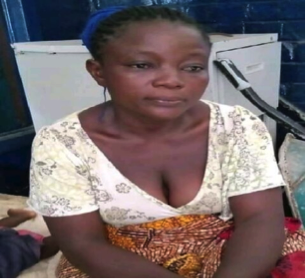 A 36-year-old woman, Garmai Sumo, mother of nine, who was recently accused of beating her 3-year-old child to death, is a victim of desertion, said Madam Finda Tamba, a closed relative of the accused.

Garmai is currently a breastfeeding mother of a 9-month-old son, who spent 48hrs with his mother behind bars in police cell at the Roberts International Airport Police Station in Margibi County before gender officers from the Ministry of Gender, Children and Social Protection reportedly took him into protective custody in Monrovia.

The issue of men abandoning women with children is an aged-old problem confronting Liberian women, as many of them continue to suffer similar fate. Apparently due to the economic situation in the country, many women follow men who seek jobs at concession areas for survival.

In an exclusive interview, the aunty to the lady charged with murdering her biological child, Finda Tamba, sorrowfully narrated that her niece Garmai is the mother of nine children but whenever men some of whom seek jobs at the Firestone Rubber Plantation get around her and impregnate her they would abscond, leaving the burden of caring for both the pregnancy and later on following labor, the child.

“Almost all of the nine children Garmai has do not have stable fathers to be identified as the men usually escape from her whenever she is pregnant. In fact I have been paying her rent and helping her with the children prior to the incident because she does not have the means to take care of all the children,” Finda lamented.

Finda disclosed that whenever the men make love to her niece Garmah, they frustrate her by abandoning her with the pregnancy, indicating, “Garmah is a victim of men desertion; they will come, love to her and leave the load with her. At her age she’s now the mother of nine children, some of the fathers took their children and five left with her, I’m taking care of three so that’s the situation Garmai is faced with.”

Heightened media reports, especially social media, in recent times, have highlighted Garmah Sumo, for allegedly murdering her 3-year-old son after he reportedly defecated in the hallway of their rental house in Dolo Town, Margibi County.

But the aunty to the accused murderer thinks otherwise, saying, “My niece does not even know about abortion so why would she kill her own child who she suffered to bring up? Let’s look at this situation from another side; Garmah is a victim of continuous desertion. She has suffered in the hands of men for too long but people are not considering her side of the story,” Finda narrated.

She continued: “In fact none of the children in school, they have not entered classroom since their birth; they do not have owners as the fathers have disowned them. Garmah has suffered a lot for her children and government needs to intervene in these situations where men play on the women and abandon them with the burdens.”

According to Finda, Garmai is not the only victim of these men, averring that several other women have suffered similar fate in the hands of some unscrupulous men who she said troop to Firestone and other concession areas for job, make love to the women, impregnate them and abandon them with the pregnancy or children.

“My niece was sick before taking her to jail. Even the child who met his untimely demise was also sick before the incident occurred. She did not kill her son, as being reported by the media, she is a victim and not a criminal,” Finda maintained.

Finda further disclosed that the family is not aware of the cause of little Sheikh’s death as there was no medical report released to authenticate the actual cause of death.

“She beat the boy with broom sticks around 4:00 PM and by 9:00 PM she called me that the child was dead.  Following the incident angry crowd comprising several young men and women decided to apprehend her as they trooped to the house but she managed to escape and was rescued by a police officer who took her to the deport and that’s how it all happened,” she claimed.

She disclosed that police have since charged Garmai for murder and sent her to court and that she is presently at the Prison Center in Bordenwieh, Lower Margibi County awaiting court trial.

Garmai has consistently clarified that she beat little Sheikh for constantly toileting in the hallway of the house; a situation according to her annoyed her landlord. Garmai explained that she used a few pieces of broom straws to beat on little Sheikh but had no intention of killing him.

She said after beating him, she put him to sleep and went in the market to buy food but upon her return, she met his lifeless body lying on the floor.