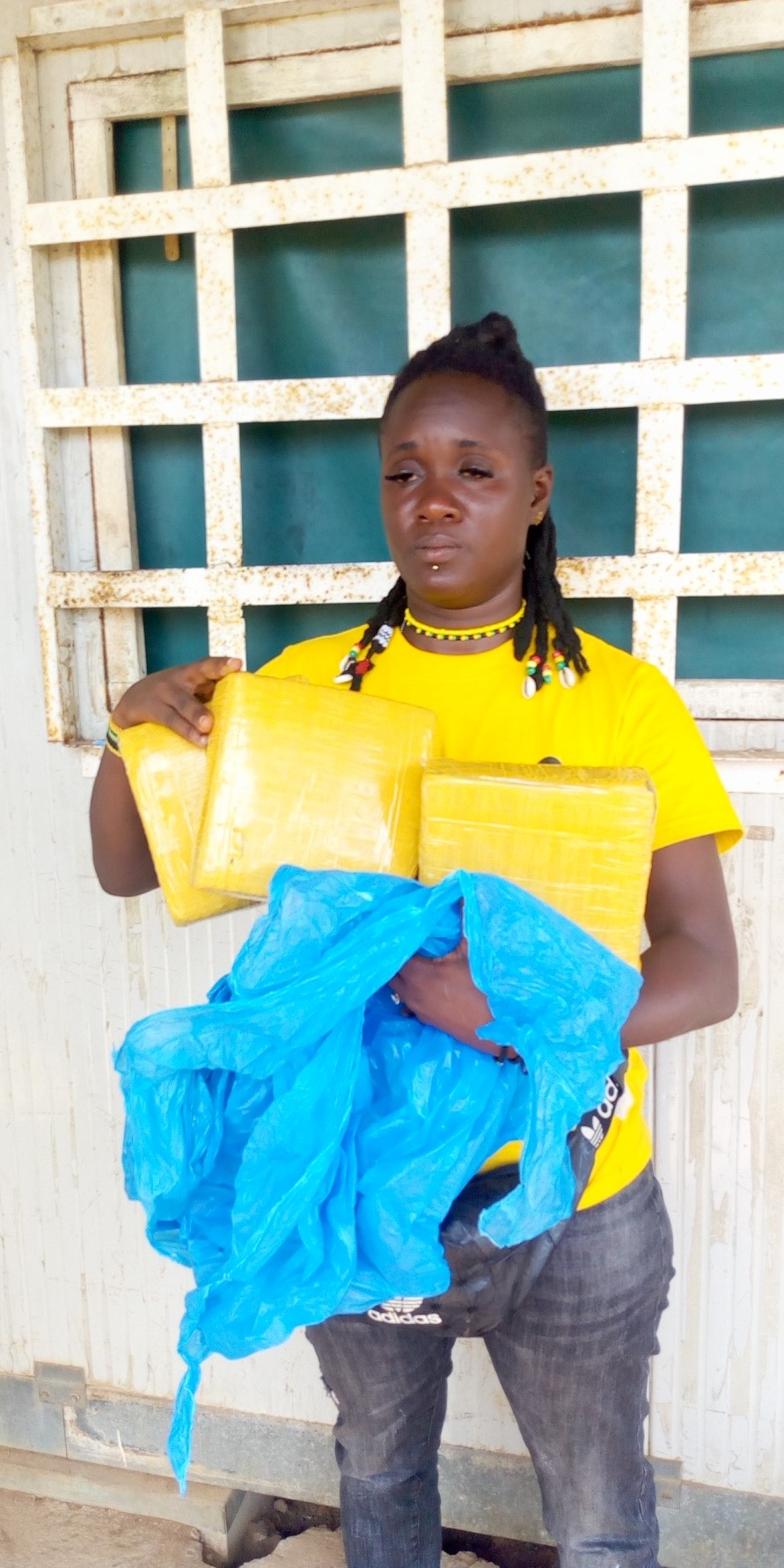 A 45 year – old Notorious Drug dealer identified as Melvina Hawah Robert, has been arrested and sent to court by officers of the Drugs Enforcement Agency assigned in Nimba County.

Melvina H. Robert was picked up during regular vehicle inspection by state security assigned at the checkpoint at the night hours.

She was apprehended on Thursday, October 22 this year at the Ganta Immigration Checkpoint while enroute from Ganta to Montserrado County by LDEA officers.

DEA charge sheet in possession of this paper is quoted as saying: Melvina Hawah Robert was arrested at 10pm local time while making her way to the nation’s capital, Monrovia where she resides in the Rehab and Old Road Communities.

Kush is a type of Marijuana, especially cannabis indica.

It is a variety of Marijuana originating from Afghanistan and Northern Parkistan, a strain of which has very high THC content.

She has since admitted being in possession of the substance during preliminary investigation by the DEA.

In her admittance, the suspect explained: “last night, at the hour of 10:40 pm, while on my way from Ganta to Monrovia, I was arrested with five plates of Marijuana drug at the Ganta Immigration Checkpoint by the officers of the Liberia Drug Enforcement Agency( LDEA) and finally brought me to their office for further investigation”.

She told the DEA preliminary investigation that each of the drugs was purchased by her at the rate of$70.00 USD from an unknown individual in Monrovia, the charge sheet indicated.

She has been charged with the crime of ‘Unlicensed Possession of Narcotic Drug’ which street value is put at USD $1,000.

Robert was charged in accordance with Section 14.107 of the Drug Law of Liberia,  and forwarded to the Ganta Magisterial Court for trial according to the charge sheet.

Meanwhile, the County Commander of the DEA in Nimba is appealing to residents of the county to cooperate with them in order to have a drug-free environment.

Col. Jeremiah W. Neapaye said fighting against drug traffickers and users should be the responsibility of every Liberian citizen and not the DEA alone.

He acknowledged the fact that it is the DEA’s duty to ensure that Liberia is a drug free nation, but said the help of Community dwellers in which they operate is key in achieving their mandates.

Col. Neapaye wants members of the public alert them of any drug related issue or person whenever they see them in their environment.

He noted that the presence of DEA officers is not in every Community and as such, they depend on members of the community to feed them with information.

In the face of untold challenges confronting their operations, Commander Neapaye is also calling on government and partners to see reason in providing them some assistance.

According to him, they are lack of necessary logistics to enhance their functions.

He described as ‘Risk’ going after criminals, especially drug dealers and users when they are not protected by any means.