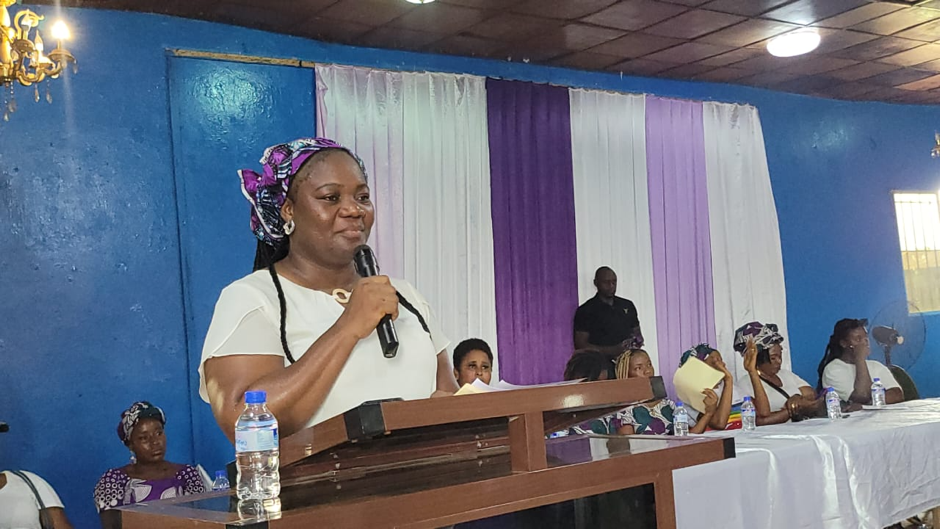 The women of District 17 joined the rest of the world to celebrate their first ever locally organized Women’s Day on Saturday, March 12, 2022, under the auspices of Welma Blaye Sampson’s Progressive Women, with the theme “Cultivating a Culture Free of Bias and Barriers to Promote Equal Participation and Involvement for Community Growth.”

Every year on March 8, the world commemorates International Women’s Day, and as women continue to fight for political, social, and gender equality, Atty. Welma Blaye Sampson used this year’s global theme, “Gender Equality Today for a Sustainable Tomorrow,” to encourage women in District 17 to put in more effort and avoid complacency in order to become forerunners of social growth.

Welma Blaye Sampson, a lawyer and Assistant Minister for Manpower (Womanpower) Development at the Ministry of Labor, is a strong advocate for women’s empowerment and gender equality.

The young activist set the groundwork for gender equity while giving the keynote address at a local women’s program. “We must put in more effort now if we want to achieve gender equality for a sustainable tomorrow, which could be in 2023 and beyond.”

“We must resist complacency and acquire the mindset that we, too, are forerunners of societal change,” she added. “There has never been a development of any civilization when women’s efforts went unnoticed, even in the most radical periods of time.”

She admonished the women that now is the time to tell their partners, parents, children, young people, and the entire community to join hands with them to build a sustainable future for the betterment of the district and beyond, asserting that without gender equality today, a sustainable and equal future will remain out of reach for women.

“We need uncompromised access to break through the barriers and raise the bars. Indeed, the time is now! “, she said.

The young female leader said, “This day is a call to every woman to not underestimate her potential,” adding, “Never say never to your dreams and aspirations.” We can be the best versions of ourselves if we hold together and push for greater heights. And if we do that, we can break barriers,” she said.

Mrs. Sampson further stated that women can have equal opportunities in the district and beyond because it is women who know the problems, and men in high places do not know what the problems are. “I assert that some may know but ignore them,” the female lawyer said.

Nevertheless, Madam Sampson appreciated those men who, she claims, continue to seek the interests of women. “Thanks to the few who understand the changing realities of the growth pattern, it is time for us to get more involved in our communities and our political system to advance our causes and make this place a better place for all.”

Delivering a tiding of her own that presents women as policymakers, she cautions all women to ensure the forthcoming political activities are gender-balanced at all levels in District # 17.

“This year we should be sending a message to fight political violence and disparity against women by ensuring that political parties and community leadership within our district are gender-balanced, beginning at the zonal level. We want to see female zonal heads, female chairpersons, and lead females in other pertinent community hierarchies. We are not just going to settle for the women’s wing. We want a seat at the table in every area of leadership strategizing within our district, “the political activist said.

Advancing way forward, Madam Sampson said women should be seen at the center of all political conventions and rallies, not as spectators or the servers of delicious meals, but at the steering wheel, putting in place mechanisms to select who qualifies to represent us. “This is a clear requirement for all free and fair democratic elections and societies,” she said.

Meanwhile, Mrs. Sampson encouraged women in the district to have clear and measurable goals to drive their work as women in District 17 by setting ambitious targets in security, education, health, and poverty reduction, amongst other priority areas, intimating that women suffer most when achievements are not met in these areas. “Our mothers spend extra hours in market places, on farms, in hospitals, and, in the worst case scenarios, face untimely death as a result of failure to achieve in these priority areas of healthcare, quality education, and poverty reduction, amongst others.”

Setting an example for women in the district to follow, she said by 2024, at least 78% of women in District 17 should be free from poverty, which she said can only be achieved by having more women in leadership positions.

As a result, all women are being reminded of the importance of standing up for what is right and what is legally theirs, ensuring that no one has authority or influence over the democratic rights and vote of a woman, not even her husband. “We should be able to exercise our rights without fear; we should be allowed to sit in meetings conveniently near us without our house chores or child care interfering with our responsibilities to serve. And this is what empowerment means, “she said.

Appealing for security in the district, Mrs. Sampson pleaded with all the dwellers of the district to resolve to activate the community security watch team, building upon a simple idea: security for all. According to the young activist, it is alleged that criminals from outside are invading the communities within the district. She said women are not safe during the day or at night.

“They are unable to walk through the neighborhoods without securing their belongings or fearing being abused. You risk losing your phone when your child tries to play with it on your front porch, not to mention taking it to the charging booths. Motorbike riders are losing their bikes every day when they ride at night. Women should know that in this entire situation, we stand as victims. So we must leave our fears behind and ask those tough questions so that we can get what we deserve, “the Minister said.

In addition, Mrs. Sampson encouraged women to always be able to reach for the top as there is no exception to having women in leadership positions. “I fought for this when I was the Executive Director of Girls Advancing, mentoring girls to become college-bound and career-focused. Madam Sampson promised to continue pushing for gender quotas in community leadership until a fair system for all women in Liberia is achieved. “We simply cannot exclude half of our talents from leadership positions. Having a woman in a leadership position should become the norm, not the exception. “

Meanwhile, Mrs. Sampson lauded President Weah for his commitment to supporting women’s leadership by pointing to evidence of the appointment of women in key positions, including herself, and his pledge to support women’s political participation in 2023, which was disclosed during his recent State of the Nation Address. “He is our Feminist-In-Chief. So if we can get the support of our Feminist-In-Chief, it shows that everything can change, if we hold together with tireless perseverance. “

She believes that the president’s commitment matters to the quality of decision-making, and that it matters to the girls mostly. She said it tells them that they can reach for the top through hard work and that would make them judged on their ideas, their dedication, and their talent, not on their chromosomes. Therefore, assuring that gender equality for a sustainable tomorrow is possible and starts now.

Government announces progress in administering Measles Vaccination As it alerts the public...