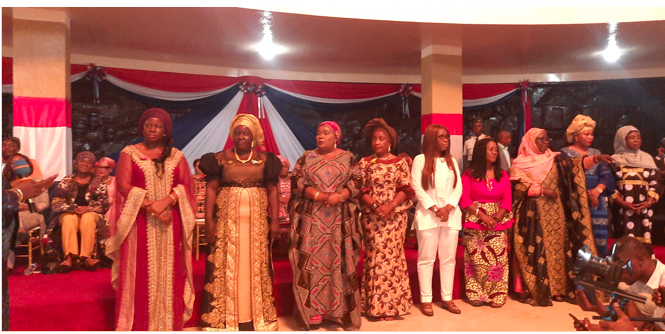 The Liberian Women’s Legislative Caucus (WLC) has installed a leadership team that would lead the women’s caucus in the national legislature for the next four years on Thursday, June 9, 2022.

During her speech at the induction event, Vice President Taylor urged the women leaders to be aware of current concerns affecting women and girls in Liberia.

The VP goes on to call on the WLC’s leadership and other female legislators to join the gender minister in speaking out against sexual, gender-based, and domestic violence.

She encouraged these ladies to be the change they wanted to see in the world. declaring that women’s lawmakers should advocate for a better educational environment by passing measures that will result in good change for every girl and woman

She asked all women to join the fight for 30% female representation in Congress, while also cautioning them to be more supportive of one another.

She advised women interested in running for office to talk to rural women not just during election season, but to build a connection with them that would remain long after the gender gap was closed.

She also praised the president for declaring the CDC’s ticket to have a forty percent female presence in the national assembly, pushing all other political parties to do the same, claiming that women are an unmistakable symbol of positive change in leadership.

Former Chief Justice and inducting officer Cllr. Gloria Musu Scott, for her part, encouraged the women’s legislative caucus not only to serve their districts, but also to represent Liberia as a model for the younger generation.

Simultaneously, Cllr. Scott asked the national legislature to act on long-standing proposals that promote women’s involvement in governance and outlaw sexual, gender-based, and domestic violence against women, as these measures are critical to Liberia’s democracy.

During her induction speech, Sen. Nyonblee Kangar-Lawrence, the newly inducted chairperson of the women’s legislative caucus, promised to uphold and lift the values of women in the legislature by working with the international community and continuing to constantly advocate for women’s rights and good governance.

Sen. Kangar-Lawrence pushed women to seek for additional legislative seats, claiming that the dream of having thirty percent of women in the national assembly, as well as women’s right to political participation, can only be accomplished if more women are elected. She predicted that in the general election in 2023, the liberty party will field a majority of electable women.

She also urged every woman to join the action plan in addressing the obstacles women experience during election season, claiming that “the more women leaders we have, the more confident we are in prioritizing the issues of women and children across the country.”