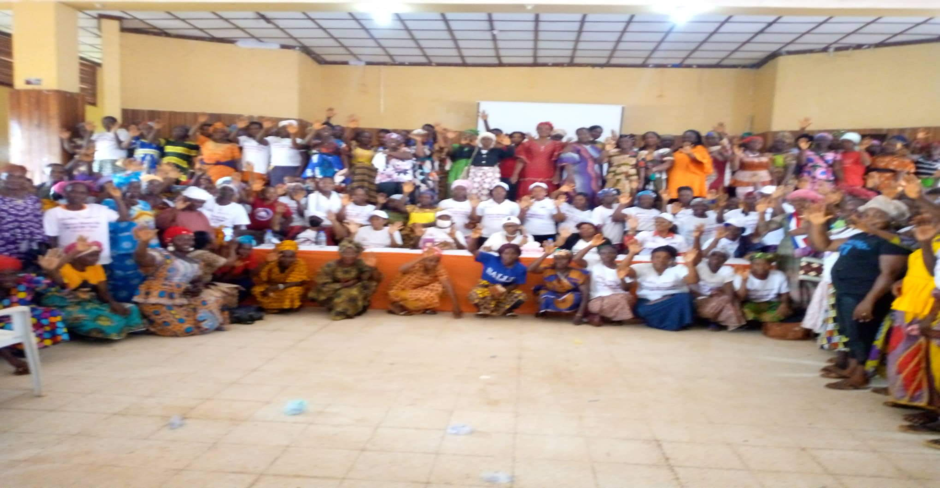 The Establishment Coordinator of Angie Brooks International Centre (ABIC) and the Women’s Situation Room (WSR), Cllr. Yvette Chesson-Wureh, is calling on the women of Liberia to take the country into their own hands so that their children cannot die due to foolishness.

Cllr. Wureh also urged the women to support women’s leadership, which, according to her, is a big problem in Africa.

She made the call over the weekend in Bong County at the closing of the Eminent Women Training Activities held at the Administrative Building in Gbarnga City, Bong County.

The Eminent Women Training Activities are under the project title “sustainable and inclusive peace in Liberia through promoting women’s leadership and participation in civic and political life and their strengthened role in conflict resolution”.

In a closing statement, Cllr. Wureh told the women and youth that it was a pleasure once more for her to address them after hearing the amazing transformation, emphasizing that it is the work that they came to do and to see the change in them and for them to step up to the plate.

“We came here unless we know ourselves and take the thing called being scared or scared to sit down.” We can’t do anything for anybody else, so one of the first lessons you learned is to tell scared to sit down, I will do what I have to do and talk to who I want to talk to, and I will take the peace of this country in my hands, and that is what you are doing, “she said.”

According to her, since elections are approaching, women and youths must take the country into their own hands and make peace, emphasizing that no United Nations or United States will come because they are tired, so they must do it themselves.

The ABIC Establishment Coordinator also admonished the women that the politicians’ children are not in Liberia, better still in America and Europe, therefore they must not sit down and let their children be used to sitting down in seats for six years because of the rice, chicken feet, and pig feet they will give them.

“How long will the rice last? In fact, it is your same money they are giving back to you for which your child will be chopped with a cutlass and brought to the hospital. Then you start selling your lappa to get medicine and food because you know there is no food in the hospital and you have to carry it.” “Then you have to pray that your child doesn’t die and can walk afterwards because of a stupid person sitting in a chair,” she added.

“Women Let’s take this country in our hands. Our children are not going to die of foolishness. I also told you about supporting women. That is one of the big problems. If you support women tomorrow, when she gets up to the chair, it will be women who will get you down there, but the men will go and make your chairlady. What will chairlady in the political party do for you? When you open the doors for women to step in, they will bring more women in. Do not be a female wing chair, you are not chicken to be a wing and do not be in the kitchen in any political party, “Cllr. Wureh said.

Additionally, she urged the youth not to be used as militants for anybody, as such politicians should bring their children and use them as militants because the same way their mothers carried them for 9 months, that is the same way their wife and girlfriend carried their children. Therefore, they are not dogs or cats that they will kill and throw away.

In conclusion, she called on the women to get up since they now know how to talk in public and they will not be embarrassed in front of anybody again.

We thank you for listening to us and for taking in what Gifty taught you in the field. I also want to thank Gifty and the entire team for such a good job, and we are not going to stop. We have elections coming up, and we are going to be training you as observers, which is very important so that when you hear or see anything, you will report it to us in order for us to stop the violence. I look forward to working with each of you in the situation room,” she noted.

For her part, the Chair of the Board of Directors, ABIC, Hon. Olubanke King-Akerele, commended all the women for taking out time to grace the occasion because of what they have experienced and are preparing themselves for leadership, which is part of the process of being a leader and they will have to learn more about leadership.

Hon. King emphasized that training is important and it is not going to be a book thing all the time because it is part of the learning from their experiences.

“We are also in the county of Chief Suacoco, who played a critical role in the bringing together of Liberia. How many of you know that she was a Zoe but was made a Chief by President Daniel E. Howard due to her work of peace and bringing the nation together. She had peace in her hand and she was the first person who had it right here in your county. She played a very important role in building the nation. She was a nation builder. Mary Anoittee Brown Sherman was the first woman President of the University of Liberia and she said, “If you know that you like us, bring us together as a people and don’t divide us.” And I want all of you to remember this because it means we are all one people and there is a relationship, and I want you to understand that when politicians try to divide us, tell them no, “he said.

Hon. King further told the women that another great woman that comes from Bong county is Vice President Jewel Howard Taylor, and a lot of people who have helped the country reach where it is and they stand on the shoulders of each other. As such, that is why ABIC went to the county.

“We don’t have to be here, but we are all right here for the good of the nation.” We are here to rebuild the nation. It is our mothers, grandmothers, Emma Shannon Warsar, Mary Brownell, and others. We stood on their shoulders, so we are not here for ourselves and because of that, when Senator Botoe Kanneh was contesting, we put our hands around her when they were working to destroy her and you see where she is today. She is in the Senate and I’m saying this to you because she wants to see more women get to where she is and for them to take the charge, “she said.

In her remarks, Cllr. Frances Allison-Johnson, an eminent woman of the WSR, stated that she believes the program has been very beneficial to the people of Bong County and that the community engagements have been eye-opening for her as well.

Cllr. Johnson stressed that the only time people see that you are important is at election time because they want to be voted for and she was very touched by the testimonies by various participants during the engagements when they said that it is because of ABIC that they were able to stand up in front of people to speak, but before that they were not able to stand before a crowd to say anything. As such, ABIC has made it possible.

She thanked ABIC, especially Cllr. Wureh, for the important program that has included the people.

In a remark on the project impacts, the Community Chairlady of Salala, Ma Tenneh Frances, highlighted that what ABIC has brought changes in their lives.

Ma Tenneh appreciated ABIC for the efforts they put toward the program that made them understand their importance and how to handle situations in their various communities.

According to her, they have discovered their true potential and they too can become a leader.

She admitted that they now know the importance of women’s leadership in Liberia, adding that “we say thank you to Cllr. Wureh and the entire team for his program.”

Meanwhile, in a presentation of the project, the ABIC Head of Programs, Madam Gifty Mensah, described the occasion as special for ABIC, which they embarked on 18 months ago in Bong County.

Madam Mensah disclosed that the work was done by the chiefs, commissioners, women leaders and the youth and ABIC only went to provide the means for them to do it.

She said that when the project started, ABIC designed it and they were looking at some of the things that happened during the 2022 Midterm Senatorial Elections, especially issues of violence against women in elections and their participation in politics, from which a lot came out.

She indicated that they designed the program under the WSR Banner, which is a peace building magazine that brings together ordinary women and youth to take ownership of the peace process in their community.

The ABIC Head of Programs also stated that as part of the WSR mandate and mechanism, they were looking at past election issues, which was very important for them to look at in order to develop responses and approaches on how to resolve matters so that the same could not happen in the 2023 general elections.

She said when they spoke to their sponsors, which is the UN Peace Building Fund, they were very happy and gave them money. “They told us to look at two of the counties in Liberia where violence was the most in the 2022 Midterm Elections and Bong and Montserrado counties were selected, so that is why we are here in your community”.

“We couldn’t target all the communities, so we did community mapping to see where violence is the most, and we were able to choose 10 communities for the project.” And when we came, we had two worries. The first is that you have to put your community first because it is the most important thing to you. It is where you live, work, and spend your entire life. And so, together we all agree that the peace of our community is in our hands, “she noted.

Finally, she said before coming into the communities, they met with the County Superintendent in the person of Madam Esther Walker, including district leadership, women, and youth, as well as civil society organizations and the media before they conducted the community entry.

Madam Mensah announced that they were able to trained 200 women leaders and youth in mediation, conflict, resolution and neogiation so that they can be able resolve conflicts in their respective communities.