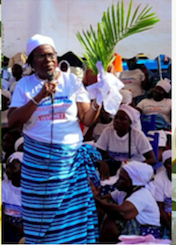 The women of Liberia met on Monday to formally sign the condolence book for the late Madam Roseline Toweh, a peace activist and supporter of women and girls. The condolence book signing, which began on Monday, will go on through the weekend of July 15th, 2022.

The women paid heartfelt respect to the deceased colleague at the signing ceremony while in a somber mood, calling her a big loss to the country. She was a nationalist and patriot who, up to the time of her death, preached the gospel of peace and fought tenaciously for the rights of women and girls. On June 18, 2022, at Congo Town’s St. Joseph Catholic Hospital, Mrs. Roseline Toweh passed away. She served as the Young Women’s Christian Association’s national coordinator (YWCA). She was a prominent participant in the Women’s Situation Room as well (WSR). She served as the leader of the Liberian Women’s Mass Action for Peace and recently read the organization’s position statement at the conclusion of a 14-day fast and prayers. It urged the government and all relevant parties to do all necessary action to keep the peace.

Roseline will be remembered for her contribution in ensuring that the peace in Liberia is perpetuated, said the National President of YWCA, Mrs. Helen Bassey, in her remarks thanking the women for attending. She also noted that her remarkable advocacy on behalf of the women and girls of Liberia was selfless.

The transient referral hub for women in crisis at Ma Mary’s will be constructed in order to preserve the memory of Madam Roseline Toweh, according to the chairperson of the board of the Women’s Situation Room.

The late Roseline Toweh was a prominent woman from the very beginning of the war room of the Women’s Situation Room, according to Cllr. Yvette Chesson-Wureh, Establishment Coordinator of the Angie Brooks International Center for Women’s Empowerment, Leadership Development, and International Peace and Security.

“The late Madam Toweh has been with us at various WSR meetings for the peace of this country,” she remarked. For the young people, she was always there. She has concentrated on that. She continued by saying that she always tried to relate to the kids. Dr. Chesson-Wureh continued by urging the ladies of Liberia to keep in mind that they hold the power to bring about peace. She and Mrs. struggled for maintaining the country’s peace, thus everyone must cooperate to do so.

Former National Chairman of the Civil Society Council Frances R. Deigh Greaves told people that the late Roseline Toweh was a smart woman who took charge. She said that Roseline was a part of numerous national and international organizations that helped women’s voices to be heard. By expressing her empathy for young people, she served as the voice of the generation.

“I apologize for the inadvertence”

‘This Year Was Difficulty’