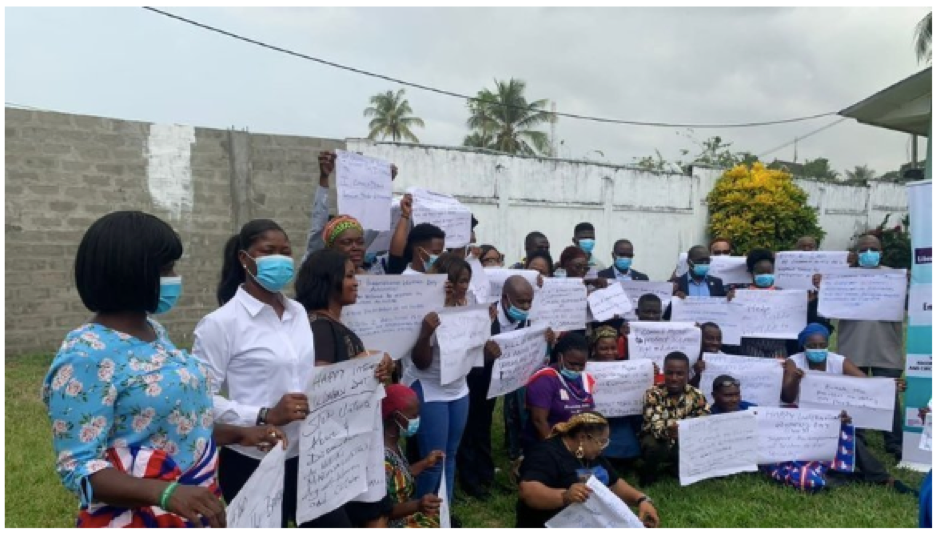 WONGOSOL (Women’s NGO Secretariat of Liberia) has revived and stepped up its campaign for Liberia to create a war crimes court. According to a recent campaign initiated in Monrovia, the women are attempting to collect 500, 000 signatures in order to utilize the petition as a tool to urge the government to act.

It has been three decades since the end of the fourteen-year civil conflict in Liberia. Citizens still await justice for the lives of over 250,000 women, girls, children, and men. Guns have been quiet in Liberia for a long time, but the scars of war are still visible on the faces of many Liberians, especially women and children, who were hurt the most when the fighting was at its worst.

With the above, the Women’s NGO Secretariat of Liberia (WONGOSOL), a national umbrella of 150 women’s civil society organizations and community-based organizations in the 15 counties, along with seven (7) women-led CSOs, is increasing women’s voices and representation for meaningful participation in the ongoing advocacy prioritizing the full implementation of the TRC recommendations, especially the establishment of a War Crimes Court in Liberia.

WONGOSOL said the petition serves to secure public buy-in by soliciting national voices to back this meaningful advocacy through generating 500,000 signatures to demand political will from the Government of Liberia for progressive change to end the culture of impunity for conflict-related crimes. In the same way, they urge the Liberian Legislature to speed up efforts to set up the judicial committee as a concrete step toward accountability and to keep talking about the 2019 Resolution on the War Crimes Court.

“Sign the petition #JusticeForVictims to join us in this fight! We are thankful for the help from the Women’s Peace Humanitarian Funds through Reconciliation Resource to give CSOs/CBOs, especially women, the tools they need to take part in the ongoing advocacy,” WONGOSOL said.

The women organization said one of the problems of Liberia’s civil wars was the weaponization of sexual violence, which is still an issue in today’s society, and impunity has not been treated with much attention at all levels (traditional and official levels). The TRC determined that all sides of the conflicts in Liberia were involved in the commission of heinous crimes, including rape, sexual assault, trafficking of women and children, torture, and forced conscription of women and girls, as well as the use of women as sex slaves. These crimes were used as tools during Liberia’s civil conflicts to subdue and gain control of women. Some effects of the war that continue to plague Liberia today include, but are not limited to, malnutrition, economic deprivation, illiteracy, and poor health.

Although women and children were disproportionately affected by the wars in Liberia,  women experienced fewer causalities as compared to men during the civil conflicts, according to the TRC Report, they experienced serious inhumane and degrading treatment largely due to the societal assigned gender roles they play, such as homecare, and the limited participation in economic and political decision-making processes at both local and national levels. The limited responsiveness to gender-based violence after the war and its manifestation in the current environment is but a mockery of things! In addition, a great number of affected populations are under the influence of drug and substance abuse and are susceptible to committing crime and violence, mostly against women and girls. Even though the government has made promises to hold those who committed terrible crimes during the civil war accountable, there have been more rapes because there isn’t enough political will and people just don’t care. Increased violence, ritualistic killings, structural problems that have been around for a long time, differences in skills, and harmful practices have kept gender inequality for Liberian women at an unacceptable level, the women said.

Liberia’s conflict can be traced back to two broad factors. First, large parts of society were routinely left out of institutions and political power, and they had very limited access to key economic assets and ways to make a living. As of today, these issues are still pervasive in our society, including economic mismanagement, corruption, etc. In every part of Liberian society, people still talk about the lack of accountability and wrongdoings.

The lack of political will for the government of Liberia to implement the TRC recommendations remains fragile, though it is with the mandate to adopt specific mechanisms to promote national peace, unity, and reconciliation to facilitate genuine healing for victims and survivors of the civil war. The recommendation listed 207 recommendations, which included the establishment of an Extraordinary Criminal Tribunal (the proposed War Crimes Court), prosecution, national healing through truth-telling, reparation, and memorialization for strong democratic justice and the rule of law to be enforced by institutions and the government.