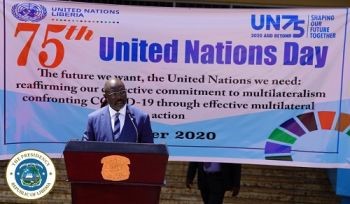 As the United Nations celebrates its 75th Anniversary on October 24, 2020, President George Manneh Weah has had fond words for the august body which was founded to pursue and secure world peace and tranquility following a horrific global war.

Making remarks at celebratory ceremonies organized by the UN Liberia Office in Monrovia Friday, October 23, 2020, the Liberian Leader opined: “We can proudly say, the world is safer today and more prosperous because of the UN. However, some of the main focus of this august body must be realigned to current day realities. Countries and peoples have evolved. The world has changed and we must adjust to continue to achieve the objectives of the San Francisco Charter.”

He asserted further: “It bears testament to the foresight of its vision bearers to maintain international peace and security, develop friendly relations and be a center for harmonizing the actions of nations; adopted on 25 June and formally enacted on 24 October 1945.”

The United Nations’ 75th anniversary ceremony this year falls on Saturday, which is the 24th of October 2020, but was celebrated a day in advance since Saturday is a non-working day.

The anniversary theme this year is: “The future we want, the UN we need: reaffirming our collective commitment to multilateralism confronting COVID019 through multilateral action.”

President Weah said he was glad to participate in a special occasion marking the observance of the remarkable milestone the UN has achieved, adding: “As we celebrate, in advance, the Seventy-Fifth (75th) year of UN existence, Liberia, one of the 50 countries that signed the Charter in San Francisco is proud to be a success story of what the UN stands for.”

He acknowledged that over the decades of its existence, the UN has scored remarkable progress around the world, particularly on the peace and security pillar.

“Its Peacekeeping missions, including the United Nations Mission in Liberia (UNMIL), for example, has brought about law and order from intractable conflict situations,” Dr. Weah said further. “It remains the beacon of fundamental human rights for all, including freedom of speech, gender equality and women’s empowerment.”

He said he was elated that the United Nations has helped and continues to lead during the raging health emergencies.

With UN assistance, President Weah asserted, “Liberia combatted Ebola and is now withstanding COVID- 19 a deadly disease that is not going away.”

According to him, COVID-19 has immensely overwhelmed healthcare systems around the world, including those of developed nations and its attendant economic crisis continues to have an adverse impact on many nations around the world.

“Ours has been no exception,” the President said confidently, but was quick to state that “working with our various partners, including the UN, we have seemingly been spared some of the most negative effects of the crisis so far.”

While the pandemic lingers, he noted, “We have experienced and continue to see different acts of violence and civil unrests in our sub-region. Let us remember that the real enemy is COVID 19 and not ourselves and our people.”

“Let’s refrain from violence and embrace peace, because it is only through peace and stability development for our people and countries are possible,” the Liberian Chief Executive warned, adding that his government remains committed to the UN in securing world peace and upholding basic human rights for all.

He thanked Dr. Kingsley Opoku Amaning, Resident Coordinator and staff of the UN Liberia Office for the great working relationship between the UN and the Government of Liberia.

“In our various discussions over the implementation of the Pro-Poor Agenda for Prosperity and Development,” he indicated, “there has been a common understanding that my Government and the United Nations will work more with the communities across the counties.”

“I would therefore like to see a greater and stronger United Nations presence at the community level to enable the body tailor solutions that will benefit the people.”