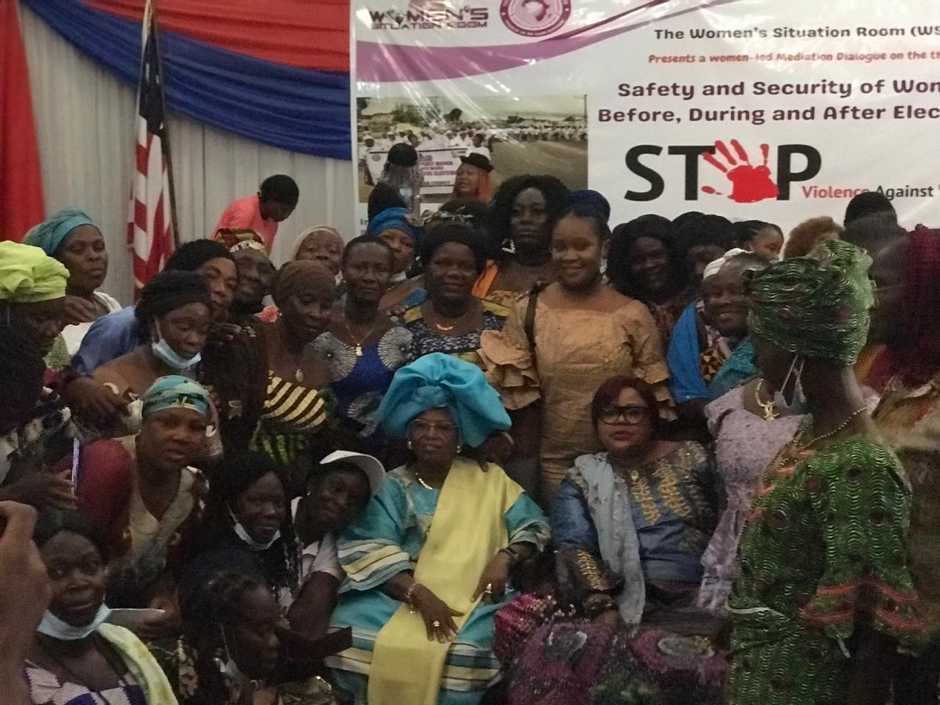 Leila B. Gbati authored this text.

The Women Situation Room (WSR) held a one-day debate on ‘Safety and Security of Women Before, During, and After Elections’ over the weekend.

In the Cecil Dennis Auditorium of the Ministry of Foreign Affairs, women leaders from various communities and political parties gathered to discuss the safety and security of women and their respective leadership positions.

The Deputy Commissioner General for Naturalization, Liberia Immigration Service (LIS), Atty. Asatu Bah Kenneth, spoke to the women about promoting the security and safety of women during elections and understanding the role of the security agencies. She advised them that if they want to be successful in reducing violence against women during elections, they must engage in the promotion of violence against women.

Atty. Kenneth said that there is a great deal of violence against women all around the world, but they are particularly concerned with the cases in Liberia. He emphasized that before Liberian women can push the subject of violence, they must disarm their hearts and stop badmouthing each other.

“You don’t know what you’re subjecting your friend to that may have harmed or victimized her for something she doesn’t know about,” she advised Liberian women.

Attempt to assist your friend while she is experiencing difficulty. Then she will feel secure because you are extending your hand to her.

Atty. Kenneth told the women that they must encourage one another and speak openly about how AIDS is impacting them, rather than only stating that it is the correct thing to do.

However, she complimented the ABIC and its partners for hosting the event and expressed her admiration for the large number of women in attendance.

As a woman with extensive experience in the Liberian security sector, the Deputy LIS Commissioner urged the ladies to pay attention to their safety before, during, and after the elections because protection is everyone’s concern.

She stated that domestic violence is pervasive, even in households where husbands beat their wives and boyfriends use acid on their girlfriends.

“Violence is not only physical, but also domestic, such as when you tell your partner that you want to be a senator or representative and he tells you that you are on your own, and then he stops providing food for the household. “As a woman, you must now view all of these actions as violent, and if you wish to compete, you must seek everyday support for your children,” she advised.

According to her, women will need to treasure the small amount of calm they have today and ensure that they are aware of the escalating violence around them.

Atty. Kenneth asserted that she foresaw Liberia returning to its pre-war state as a result of the presence of at-risk youths in the streets and ghettos that were being crowned as giants by security officers.

She noted that if Liberians do not attempt to address the condition of at-risk kids immediately, a large number of them will be used to underscore that “it is time for us to work with our children to minimize violence in the country, not only in the community but throughout the nation.”

As women, it is time to forget about those men, put on our thinking caps, and take action to ensure the safety of our nation. “Violence occurs everywhere because individuals do not know how to preserve the various sections, including the women and children’s protection unit at the Liberia National Police, of which I am the first chief,” she claims.

Attorney Kenneth went on to say that the first report they did at the WCPS at the LNP was to recommend decentralization through the United Nations, and today they have the WCPS in all countries, and how many women can visit those areas except when their child or the child of a relative is being raped. Before people can identify with these places, they have no knowledge of the procedures involved and begin to complain that the government is doing nothing.

She admonished community leaders, such as senators and representatives, that now is the time for them to cooperate with the various police stations in their various towns and get to know the authorities, rather than waiting until the last minute if something were to happen to their family members.

Prior to the elections, she urged the female leaders to initiate dialogue with the police commander in their particular villages.

“You should serve as the community’s protection. If you do not know how to safeguard your environment, you will go nowhere.” You cannot sit in the community as an aspirant, and you are unaware that there are ghettos. In fact, your community does not even recognize you, and you do not attend community gatherings. Instead of waiting until 2023, you will interact with your staff and be aware of their concerns if you attend meetings, says the attorney. Kenneth said.

In a welcome address, Cllr. Yvette Chesson-Wureh, Initiator of the WSR and Establishment Coordinator of Angie Brooks International Center (ABIC), reminded the audience, particularly the women, that they were born from women and not men, and that, looking back on their lives, it was their mothers’ influence that brought them to where they are today. Therefore, as their moms could manage a household, so can they manage the House, Senate, and Representative, emphasizing that there is nothing they cannot do in the Senate and Representative.

Cllr. Wureh advised the women that running for senate and representative is not a book business, but rather a matter of common sense, and that everything that occurs in the House is a part of their daily life.

There is nothing unknown to you in that mansion. “You believe that reading and writing were the only obstacles that women in this country had to overcome in order to achieve their current status. I want you to know that we have the ability to make things happen if we put our minds to it, so do not be disheartened or believe that it is impossible. If women in other countries can change their countries, there is no reason you cannot change Liberia, she told the women.

As an initiator of the WSR, Cllr. Wureh discovered that women who are running for office do not have enough poll watchers, stating, “Your strongest supporters are poll watchers because this is what I’ve found not only in Liberia but also in other countries, and I bring this to women’s attention every time that you cannot have a poll watcher who will go for launch and you do not have another one behind because you will not have enough poll watchers.” Ensure that you have a poll observer. Do not permit them to begin counting the votes. And if your vote watcher is not there at the conclusion of the ballot counting, ensure that your poll watcher has approved and signed the signature page and also take a picture of it.

Cllr. Wureh advised the women who will be running for office to utilize the WSR because it has a call center and will provide the women with phone numbers to report any sort of assault. As a result, the youngsters will be in charge of the call room, while the eminent ladies would address situations of violence reported to the room.

Lastly, she pushed the ladies to press forward, emphasizing that they should not be characterized as women who aspire to be executive counsel; their focus should be there, and nothing should deter them.

If you intend to go for it, go for it; otherwise, sit down. I wish you all the best, and we appreciate your attendance. The dialogue has been fruitful, and it is not over yet. We will do more, she declared.

Sustainable and inclusive peace in Liberia through promoting women’s leadership and participation in civic and political life and their strengthened role in conflict resolution is a project initiated by the Angie Brooks International Center (ABIC) and ZOA with funding from the United Nations Peace Building Fund.

Kenneth and the seasoned journalist Eva Flomo of EVOWAS Radio served as facilitators.