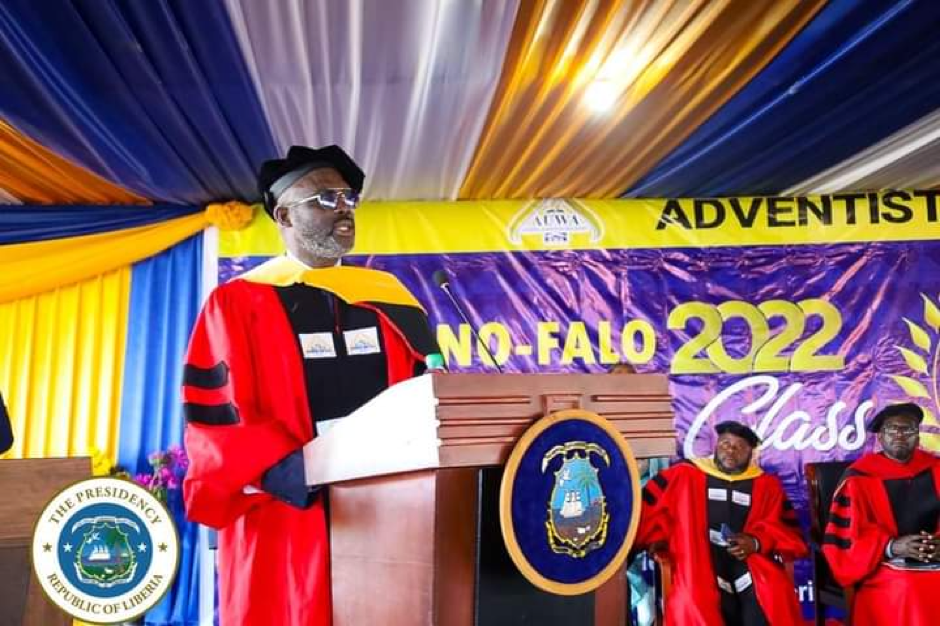 You are COMMENCEMENT ADDRESS OF HIS EXCELLENCY DR. GEORGE MANNEH WEAH PRESIDENT OF THE REPUBLIC OF LIBERIA AT THE EIGHTH COMMENCEMENT CONVOCATION OF THE ADVENTIST UNIVERSITY OF WEST AFRICA ADVENT HILL, SCHIEFFLIN TOWNSHIP ROBERTSFIELD HIGHWAY MARGIBI COUNTY, LIBERIA

The Speaker, President Pro-Tempore and Members of the 54th Legislature, here present;

The Dean and Members of the Cabinet;

Other Officials of Government, here present;

The Doyen and Members of the Diplomatic Corps;

The Chairman and Members of the Board of Trustees of the

The President, Vice Presidents, Deans, and Heads of Departments of the Adventist University of West Africa;

The Faculty and Staff of the Adventist University of West Africa;

Presidents and Representatives of other Universities, here present;

The President and Directors of the West-Central Africa Division of Seventh-day Adventists;

The President and Executive Secretary of the West Africa Union Mission;

The President and Executive Secretary of the South West Liberia Conference;

Prelates and Members of the Clergy;

The President and Members of the Alumni Association, Adventist University of West Africa;

The President and Members of the Graduating Class of 2022;

Students of Adventist University of West Africa, and all other students here present;

Members of the Fourth Estate;

I want to thank you for inviting me to deliver the Commencement Address at your Graduation Convocation today.  I am delighted to do so because it gives me yet another opportunity to meet with the young people of this country, as well as interact with the dedicated professionals who provide them with the education and skillsets that will enable them to become productive members of society.

I am passionate about education, because I believe that for  Liberia to continue on a trajectory of sustainable growth and development, it is imperative that we develop the minds of our youths.  Providing quality education to our young people and future leaders is a priority of my Administration.

We are determined to improve the educational system of our nation, and we continue to demonstrate that by making significant financial commitments in the sector, in which Government is the largest investor.

For the 2020 / 2021 budget period, Government appropriated  nearly $80 million US dollars to the education sector, which amounted to fourteen (14%)  percent of a total national budget of $570 million US dollars for that fiscal year.   Under the 2022 National Budget, we have increased spending on education, so that all the interventions we are making can lead to systemic and positive transformations in the sector. These budgetary increments will continue annually, despite the fact that we are faced with limited resources and competing priorities.  We will remain committed to the advancement of quality education in Liberia.

At this juncture, I would like to recognize and commend the efforts in Liberia of the West-Central Africa Division of Seventh-day Adventists; the West Africa Union Mission; and the South West Liberia Conference; all of which complement and enhance the activities  of the Government of Liberia in the educational field.

I am reliably informed that under your auspices, the Seventh-Day Adventist Church in Liberia operates over 10 high schools and more than 20 elementary and Junior high schools in this country.

By the establishment of this impressive facility, the Adventist University of West Africa, you have elevated your involvement in the education sector to the tertiary level.  I am informed that this is one of more than 128 Adventist Universities worldwide, and that you have received the relevant charters from the education regulatory authorities in Liberia to offer full graduate and postgraduate degree courses.

As you informed me in your Invitation Letter, the Adventist University of West Africa is a faith-based institution of higher learning, whose mission is to promote the development of the spiritual, intellectual, physical, and social capacities of your students, thereby preparing them for peaceful co-existence, knowledge advancement, exemplary leadership, harmonious relationships, and service to God and humanity.

These are indeed laudable goals, which are in consonance with the objectives of the Educational Pillar of our national development plan, the Pro-Poor Agenda for Prosperity and Development (PADP).  You are also making an important  contribution to the social reconstruction and economic recovery of a country coming out of protracted years of civil war.

We want to praise God that you are providing such quality and value-based education in Liberia.  I would like to encourage you to continue to play this important role in our country.

I would now like to speak directly to the Graduating Class.  Will the members of the Class of 2022, please stand and remain standing.  Let us first of all give them a big round of applause.

YOU MAY TAKE YOUR SEATS.

CONGRATULATIONS!!!  YOU HAVE DONE IT!!!

To the family members, friends, and supporters of these graduates, I also say congratulations to you.  If you have supported a member of today’s graduating class in getting to this point in their matriculation, then the celebration today is also about you.

SO GIVE YOURSELVES A ROUND OF APPLAUSE ALSO!!

Graduates, you have chosen “Ponofalo” as your Class Name,   which I am told means “Light cannot be hidden” .

You have received a holistic value-based education from the Adventist University West Africa. This is a kind of light that is needed for rebuilding Liberia.  Each and every one of you should be conscious of the realization of the true values that have been imparted to you here, not only for societal development and nation-building, but also for your personal development.   Ponofalo, as you today make your exit from these halls, please do not allow your Light to be hidden!!

It is often said that young students and graduates like you are the future leaders of Liberia.  But I take a different view.  Firstly, by attending this University and achieving this important milestone in your academic journey, you have already catapulted yourself into leadership.

You are not Liberia’s future leaders….you are leaders RIGHT NOW, in your communities, in your villages, cities, towns, and places of work.  As some of the fortunate few who have had the privilege of higher education, you can begin NOW, to put your newly acquired skillsets and knowledge to work as leaders, wherever you are.  You can begin NOW, to contribute to the dialogue and the narrative that will define the present, and shape your tomorrows.

For example, John F. Kennedy was elected President of the United States at age 43, Bill Clinton at age 46, and Barrack Obama at age 47.

Another example that is worthy of note, is Kira Peter-Hansen, a Danish politician, who made history when she was elected to the European Parliament in 2019 when she was just 21 years old, thereby becoming the youngest ever person elected to that Institution.

Similarly, Sebastian Kurz began his first term in office as Chancellor of Austria in 2017 when he was only 31 years old. The Prime Minister of Finland, now 36, became the head of the Government of that country at the age of 34.  And when my very good friend, His Excellency Mr. Emmanuel Macron, was first elected in 2017 as the youngest President in French history, he was only 39 years old!

Even your humble Commencement Speaker, began his political career at an early age, being elected Standard Bearer of the great Congress for Democratic Change when he was only 38 years old.  And my daughter, the late Munah Pennoh, (may her Soul rest in Peace) was a generational leader who became the youngest female from CDC to be elected to the Liberian Legislature when she was only twenty-seven (27) years old.

The point that I am making, is that many of you in this Graduating Class, if you aspire to political leadership, could very well become a political leader in this country just a few months or years after this ceremony today, if you can convince the voting public to entrust their political fate to you.  As graduates of this University, you should be prepared to assume leadership responsibility right now.

I urge you to always be peace-loving, because without peace,  there can be no development. Do you realize that you yourselves are a Peace Dividend?  Why do I say that?   I say that because your education and graduation today are a direct dividend of the peace that we have enjoyed for more than two decades now. You would never have graduated if this country was still at war with itself.  You must therefore be proactive about peace in all that you do.

At all times, you should let your behavior be guided by the Rule of Law, and you should always remain law-abiding.   As you proudly march today out of these academic halls and into the reality of post-graduate life, you will sooner or later be confronted with differences and disagreements with others, but you must realize that they can be resolved without conflict or violence.

Let me admonish you to always chose dialogue and negotiation as a first resort when seeking a solution to a problem.

I REPEAT: ALWAYS CHOSE DIALOGUE AND NEGOTIATION TO RESOLVE CONFLICTS AND DIFFERENCES.  This is an important hallmark of a civil society.

So, dear Graduates, let it be your civic duty to preserve and protect the modest gains that PEACE has brought us, so that you can build on those gains by using them as stepping stones to your future prosperity.  In so doing, you must become instruments of peace, because a peaceful and violence-free society allows growth and development to flourish and abound.

You are poised to lead the change and transformation that Liberia so desires. Do not stop here, for the journey of excellence has only just begun.  There is an old African proverb that states that

“Your destiny is not created by the shoes that you wear, but by the steps that you take in those shoes.”

In a similar vein, it is not the DEGREE that you get from the Adventist University of West Africa that will determine your destiny, but what you do with the degree.  Today, you have achieved another milestone in your progressive journey to prepare for a brighter future in Liberia.

So, Polofalo, go forth and let your light not be hidden!!

Go forth, and shine your light so that all can see it from a distance!!!

Go forth, and shine your light on your families, so that they may prosper in its glow!!

Go forth, and shine your bright light in your communities, so that they may see your good works!!

Go forth, and shine your BRIGHTEST LIGHT on Mama Liberia, so that she will rise and shine and prosper, in Africa….yea the World!!!

Polofalo, let your light not be hidden!!!

God Bless you All.

“No One Should Be Punished Before Hearing”