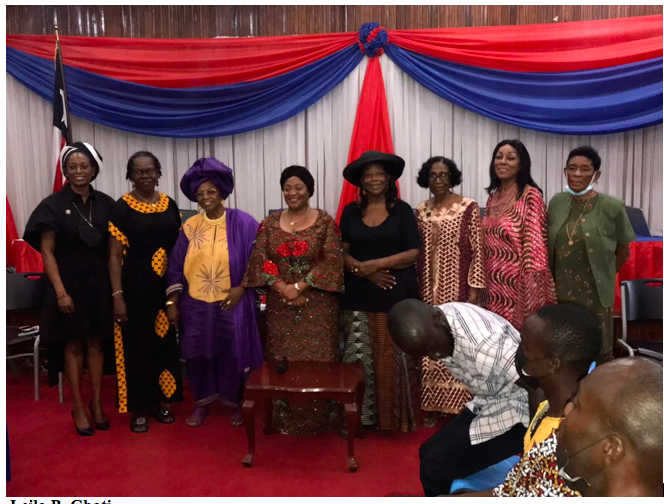 Vice President Jewel Howard-Taylor has cautioned the young people of Liberia that they are the ones that determine the future of Liberia.

VP Taylor also told the young people that if they want peace, it is peace they will get, including development.

She made the call on Thursday, May 5, 2022 at a One-Day Mediation Dialogue with Youth Leaders from Political Parties, CSOs, and Communities under the Flagship Program “The Women Situation Room” (WSR) initiated by the Angie Brooks International Center (ABIC).

In a special statement at the event, VP Taylor told the youth that they will have to be prepared to build what they want, emphasizing that whatever they do will affect them and their children in the future.

Speaking on the issue of election violence, the Vice President said that she did not send anyone to Bong County to vote for her because it is wrong.

“If you take people from Montserrado County to Bong County to vote for you, then you are not really elected by the people and by that you upset the vote in Bong County by getting somebody elected who the people don’t want, which is the first conflict, and if that person stands up to speak, the people start to get vex,” she said.

According to her, young people must stop being used, which is the bottom line, adding that “That is your choice whether you will not be used or whether you will allow people to use you.” What do you get out of it? You go to Bong County and they pay you 20 USD to cast your vote, and then you come home, and by that time, you have already lost your living place because you will not determine who you voted for because of that 20 USD business”.

VP Taylor further said that the people in various political parties are all friends, stressing that during campaign time you will see sisters and brothers fighting because they are not on the same side. After election, some of them are our fathers on one side, and after election, some of them do not go back to their families because they have been so violent to each other.

“That choice is yours and you will have to decide what kind of life you want because, in the end, it will not be wealthy. The second choice you will have to make is who you elect and what their representation is about.” VP Taylor asserts that no lawmaker should lie that they will build a road for you because it is expensive and, besides, it has to come through the government.

She called on her fellow politicians to be truthful during the campaign period so as to do away with unnecessary expectations.

She noted that people are making decisions in other parts of the world because the one bag of rice will not stay with them for six years. As such, young people must decide what they want out of these electoral processes and they must be clear.

Additionally, she said that two years ago when they started the process of helping women get elected, women made up 49% of the electorate. As such, the women are the ones that got the problem instead of them getting together and leaving the differences behind.

“Women got a vote that can be used in a block. “Women called for rape to be billable and it became billable because they made noise about it and they told the men if they do not do the right thing, they will not vote for them and now it is the time for them to start saying that because we want better schools for our children, including ICT training, instead of asking for a hand pump to be built 10 miles away,” she said.

“If you determine what you want, if you say it and stick to it, people will be forced to do it. They are coming again with all the lies and you guys know it already. At the end of the day, they will forget who you are once they get in that seat and you will start to complain because you did not demand it, but rather you took one bag of rice and a small amount of money in your pocket to go disturb somebody else. You allow yourself to be used and this is my first message and the most important thing is that you are the ones that determine the future of this country going forward. If you want peace, you will have peace; if you want a more developed country, you will get it; if you want more responsibility, people will be responsible,” she noted.

Meanwhile, VP Taylor blamed the young people for all of these actions, claiming that they keep electing the same people based on friendship and partisanship.

She urged them to hold their leaders accountable because they are the ones that determine their future, emphasizing that they should call for a county development meeting to ensure development reaches their various counties.

“I became a lawmaker without being a politician, so for me my heart is pure. Bong County gave me a platform that I never paid for. I have never paid for elections or for people to go vote for me or give false promises. I strive to do it even though it can be difficult at times, but because of that, I always respect the people of Bing County wherever I go because I know what I got from there. Representation is about bringing the people what they need. If you do it, they will not border you for anything. This is your choice and I am happy that ABIC decided to begin these conversations,” she said.

The Vice President of Liberia said that more needs to be done in order to sensitize the youth on election processes, adding that “Let’s begin the new Liberia for you. It is about you, your children and grandchildren.” It is about lifting the legacy of this country to the height that someone like former President Tolbert talked about. We are still about and we have not gone anywhere because the young people, who make up 60% of the population, still do not know what they want. If you decide what you want, politicians will follow you because you have the numbers; they should not be dragging you along, but you should be dragging them.

“We hope when you leave from here you will now be trainers of trainers and have town hall meetings on these issues. “Demand political parties so that they will know your needs and thank you for this opportunity to add my voice to this important debate,” she concluded.