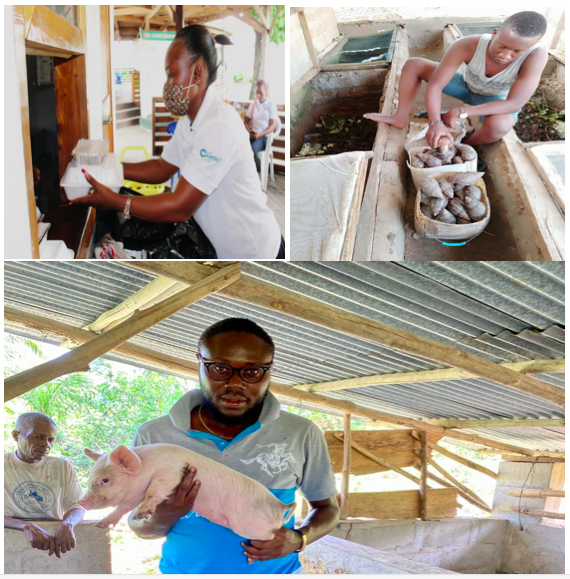 30 January 2022, Monrovia, Liberia: Liberia’s youth entrepreneurs competed strongly in UNDP Liberia’s inaugural Growth Accelerator Challenge, which aims to help businesses scale up their operations through technical assistance, mentorship, and co-financing. From snail farming to chocolate making, meat production, and healthy lunches for Monrovia’s urban population, Liberia’s youth entrepreneurs competed strongly. Four of the five winning enterprises were founded and are operated by young people between the ages of 26 and 35. Each of these organizations received business development grants ranging from US$36,500 to US$40,000, accounting for almost 81 percent of the total grant funding of US$194,750 issued in December 2021.

UNP said when the program began on August 27, 2021, the youth entrepreneurs faced fierce competition from 197 businesses that sought for business funding. They were one of 25 businesses that met the growth challenge’s requirements, which included having a revenue-generating product or service on the market.

The shortlisted enterprises were scrutinized, the UNDP said, by an Independent Investment Committee made up of representatives from the Liberian Chamber of Commerce, the Ministry of Finance and Development Planning, the Central Bank of Liberia, the Ministry of Commerce and Industry, and an independent business development consultant. The committee chose the ten semi-finalists who showed a strong possibility of becoming profitable, long-term organizations while also having a significant social impact through creating jobs and mentoring other young and upcoming firms.

In October and November 2021, the 10 semi-finalists received intense training on many aspects of business planning and management, according to a UNDP announcement. They discussed issues like understanding your customers and competition, product innovation, production, and distribution, product value and supply chains, and sales and customer service.

Access to funding was highlighted as a crucial constraint by more than 90% of the entrepreneurs that participated in the business growth accelerator challenge, with the majority of them reporting that they had so far created their company with their own money. Here are the stories of the four winning youth businesses.

“The Liberian market has been short on snails. Nimba Venture was established to supply Liberia with year-round snail supplies. “Snails are abundant during the rainy season, but they become scarce during the dry season, when they become expensive,” he says.

After two years, he has demonstrated that the company is cost-effective and lucrative, and he wants to increase production. He plans to use the $40,000 Growth Accelerator grant to help Jared create a company idea.

“Snails have been in short supply in Liberia’s market.” Nimba Venture was founded with the goal of producing year-round supplies of snails for the Liberian market. During the wet season, snails are plentiful; yet, during the dry season, snails are few.

He has proven that the firm is cost-effective and profitable after two years, and he wants to expand production. He plans to use the US$40,000 Growth Accelerator grant to buy land in Montserrado County, which includes the capital city of Monrovia, so that he may be closer to his customers. He plans to hire ten more people to help him run the snail farm and sales.

The company also aims to create jobs and encourage young people to consider entrepreneurship as a viable career option. Liberia has a young population, with 79 percent of the people under the age of 36, with the majority of them surviving on odd jobs. Nimba Venture is assisting 75 young people in starting their own enterprises by providing training and coaching.

While working for the World Food Program (WFP), Paul Wungko, 34, realized how precarious Liberia’s food security was. In 2016, he decided to start chicken and pig farming to boost national food self-sufficiency. He also produces animal feed and plantain chips.

We are heavily dependent on imported foods, which are produced in large quantities and are preserved for long periods of time, losing taste and nutritive value. Starting a farm that is heavily into food processing will help improve food security and provide jobs for others, “he says.

With the US$40,000 grant he won, he plans to upgrade his current operations by purchasing more food processing equipment, complete a cold storage facility, and acquire a tractor. He will also expand operations from Bong and Montserrado counties, to Grand Bassa, Marghibi and Nimba counties.

“Our prices are low and affordable. The idea is to make our product as affordable as ever. Our dream is to encourage Liberians to eat more locally grown meat by producing quality products that would be even better than imported products”, he says.

Joshua Zemah, 27, established Redimere Inc. in 2018 to help Liberia’s cocoa farmers earn better prices for their produce and to teach them how to produce higher quality cocoa beans.

“I grew up under cocoa trees but had never tasted the end product until 2018, when I was in school. After my first taste, I knew I wanted to make this into a business so that Liberians could taste, make, and enjoy their own chocolate,” he says.

Through product diversification and placement in new outlets, the business doubled sales in 2020. The business will acquire industrial machinery required for creating a full-fledged chocolate factory such as a cocoa press, a melanger machine, a roasting machine, and a tempering machine with the US$40,000 business grant.

He envisions a vibrant cocoa sector in Liberia that creates economic value through jobs, income and training to help rebuild the country.

“Looking forward, we hope to work with many cocoa farmers in Liberia educating them to produce quality cocoa beans and process cocoa beans on-farm,” says Joshua.

Christollie Ade Suah, 30, established The Lunchbox in 2019. While the food service sector is saturated, Lunchbox distinguished itself as the go-to place for authentic, affordable, nutritious meals that blend traditional and continental cuisines in a healthy and creative way.

“I started this business because I identified a need for clean, nutritious, and affordable meals for professionals working in Montserrado. A small survey revealed that many people were trying to make better food choices during lunchtime, but the options available were limited, “says Christollie.

The choice for urban workers was either cheap local restaurants where food was saturated in palm oil, or the larger, more expensive food chains specializing in continental cuisine. “The goal is to make healthy eating super easy with healthy, affordable products for customers,” she says.

The Lunchbox prepares, packages, sells, or delivers meals and caters for weddings and other events. The business has been on a growth trajectory, uncovering new opportunities for business diversification. The company has signed its first partnership agreement with a corporate organization to manage their staff canteen, and is looking to expand this line of business.

They are working on creating a restaurant management system in order to increase such partnerships and to help small restaurants run efficiently by keeping track of their sales and expenses.

The Lunchbox secured a grant of US$36,500 in the just concluded UNDP Growth Accelerator Challenge, which will go towards standardizing the restaurant management system, investing in a mini-food processing and packaging plant, and building a mobile meal planning and ordering app.

The Growth Accelerator Liberia challenge is in partnership with the Ministry of Commerce and Industry and funded by the UNDP Livelihood and Employment Programme.

Growth Africa and the Business Startup Center-Monrovia are carrying out the program.