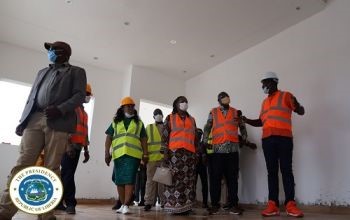 According to the Executive Mansion, the National Housing Authority (NHA) is undertaking the housing projects under President Weah’s housing program across the country consistent with the Pro-Poor Agenda for Prosperity and Development (PAPD).

Speaking to journalists during the inspection tour, the Liberian Leader expressed satisfaction over the quality of the structures, the architectural designs and the speed with which the project is progressing.

“Some of us once sojourned in developed countries around the world and saw how people live their lives in mortgaged homes,” the President said. “This instant project is a test case for our country.”

The Liberian President thanked the Management of the NHA for what he called a “milestone project” that provides opportunity for every Liberian, regardless of status, to own and live in decent homes of their choosing.

He added: “If you don’t have money or the time to build a home, you can buy a home. It is a good investment. I pray and hope it is successful in the country as it is in other countries.”

President Weah said the buildings are constructed in a way that will enable every Liberian own one of them once they are determined to do so.

“The good thing about this is that the prices vary and I am sure anyone can afford,” he stressed.

Acknowledging that the NHA is an autonomous government entity, President Weah said private citizens should also take advantage of the investment climate of the country and bring in honest investors that would engage in real estate and other businesses.

“If you have people who are interested in investing in the country, you can engage the government to bring them in,” the President emphasized, adding, “This is good for our country.”

Being the oldest African state and lagging behind development wise, the Liberian Chief Executive said Liberians needed to emulate the good examples of countries that have made advances in development.

President Weah again called on Liberians to ensure that the country is kept peaceful in order pave the way for encouraging investors to come and invest, stressing that no investor would want to invest in a country where their security is not guaranteed.